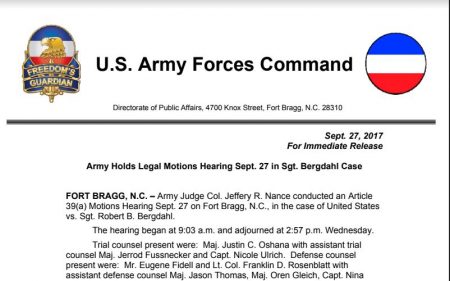 Judge Nance approved the defense’s request for a trial by military judge alone.

Defense counsel requested the judge order the government obtain outtakes of a CNN interview with a previous witness.

Defense counsel sought to have one charge dismissed due to “condonation,” a possible grant of immunity from a previous commander on the desertion charge.  The defense called via telephone as a witness Lt. Gen. (Ret.) Perry L. Wiggins, for the former command of U.S. Army North and Fifth Army.  The judge will consider this motion.

Defense counsel sought to have the Government Trial Counsel called as a witness to testify about alleged communications with the White House.  Judge Nance denied that motion.

After a mid-day recess, the defense sought to have all charges dismissed due to lack of jurisdiction, alleging he was incorrectly retained on active duty.  Two witnesses testified by phone:  Dr. Michael Valdovinos, a psychologist with Landstuhl Army Medical Center at the time of Sgt. Bergdahl’s return; and Master Sgt. (Promotable) Normand J. Paquin, who was with U.S. Army North at the time when Sgt. Bergdahl was first assigned there.

Government counsel sought to compel an un-redacted copy of a prior mental evaluation and the release of his mental health records.  Judge Nance ruled against this at this time, but ordered that the health records be assembled in the event they became relevant in future proceedings.

The next legal-motions hearing date is currently scheduled for Oct. 17, 2017, on Fort Bragg, N.C.