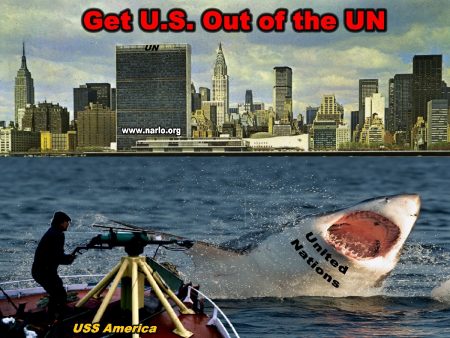 (Sep. 17, 2017) — Ever since President Wilson’s failed League of Nations, to the United Nations (UN) created in 1945 after World War II, an international movement has been under way to merge all nations into one-world government under the umbrella of the United Nations and the iron fist of the world’s central bankers.  Although the original intent of a United Nations organization was to promote international cooperation, maintain world order and prevent war, the UN has assumed powers and has instituted international policies that virtually strip the sovereignty of member states, including the United States, but has not stopped wars.

Most of the policies the UN promotes and attempts to implement internationally are based on socialist and Karl Marx principles.  Its alleged objectives are to promote human rights, foster social and economic development, protect the environment and provide humanitarian aid in cases of famine, natural disasters, or armed conflict.  The UN, for all intents and purposes, has become an international body that tries to enforce those socialist policies on all member states across the globe.  America capitulates to the policies of the UN, while the rest of the countries, like Russia and China, thumb their noses at them.  We “pay,” while the two other super-powers get off scot-free and then get in our way when we try to use the UN to perform its stated objectives.

It must be remembered that most of the member states to the UN are either the poorest of the poor or run by dictators and despots, Russia and China included.  The small ones beg at the door of the UN for money (our money) and aid (or special favors), and the UN gives it to them at our expense.  The two other super-powers manipulate and exploit UN weaknesses for their own self-interests.  Climate change is just another way of the UN redistributing the Western world’s wealth to the rest of the member states.

What does the United States get for that hefty contribution to the UN?

The UN gave us Agenda 21 wherein Agenda 21’s policies can be summarized thusly:

“Agenda 21 is a non-binding, voluntarily implemented action plan of the United Nations with regard to sustainable development. It is a product of the Earth Summit (UN Conference on Environment and Development) held in Rio de Janeiro, Brazil, in 1992. It is an action agenda for the UN, other multilateral organizations, and individual governments around the world that can be executed at local, national, and global levels.”

Sidebar:  Several years ago we asked seven environmental groups the meaning of “sustainable development” and got seven different answers.

Voluntary! Non-binding! Hardly!  The United States has implemented most of Agenda 21 wholesale and the American people had no say in the decision.  But the above definition belies the underlying intent of Agenda 21 and that is government owning and controlling all land.  This “intent” has been publicly promoted in the following UN statement:

“Land, because of its unique nature and the crucial role it plays in human settlements, cannot be treated as an ordinary asset, controlled by individuals and subject to the pressures and inefficiencies of the market. Private land ownership is also a principal instrument of accumulation and concentration of wealth and therefore contributes to social injustice; if unchecked, it may become a major obstacle in the planning and implementation of development schemes. Social justice, urban renewal and development, the provision of decent dwellings-and healthy conditions for the people can only be achieved if land is used in the interests of society as a whole.”

Contrast this with Thomas Jefferson’s statement on American land ownership:

“The right to procure property and to use it for one’s own enjoyment is essential to the freedom of every person, and our other rights would mean little without these rights of property ownership.”

It doesn’t stop with UN’s control of the land.  The UN wants to control all money, trade, fresh water, food, health care, the environment, the climate, the sea and establish an international army on a global scale.  In effect, the UN wants to become the world government to which all other governments must bow down.

The UN’s Agenda 21 policy is a direct threat to American sovereignty.  Nevertheless, past presidents and all American planning agencies have implemented those policies without a treaty being debated and ratified by Congress as required by the Constitution.  Agenda 21 has been instituted in America in violation of the law and by stealth and sleight of hand, all at the direction of national and international environmentalists and socialists in bed with the UN.

What else has the UN imposed on the United States?

Then there are UN Security Council Resolutions in their attempts to maintain world order and prevent war.  The UN has passed worthless resolutions sanctioning Saddam Hussein’s Iraq, Iran, Syria and North Korea.  In every case, the sanctioned nations have ignored the resolutions and have proceeded down the path of nuclear proliferation or continued to gas or kill their own people.

Where are we now with UN sanctions?  Saddam Hussein continued to gas and kill his own people in violation of numerous UN resolutions, and thousands of Americans died stopping him.  Dictator Bashar Al Assad of Syria has gassed his people on multiple occasions.   Iran and North Korea are still expanding their nuclear super-weapons and missile technology while telling the UN where to get off.  Obama’s Iran agreement is not worth the paper it is printed on.

War with North Korea becomes increasingly likely as Kim Jong-Un continues to explode nuclear bombs and launch what could eventually be nuclear-tipped Intercontinental Ballistic Missiles that could reach any part of America.  He does it in the face of UN resolutions and sanctions.  China has been no help and in fact has been a hindrance.

Russia, under ex-KGB agent Vladimir Putin, has invaded sovereign territory in Ukraine and actually annexed parts of Georgia and all of Ukraine’s Crimea.  His troops are still in Eastern Ukraine.  Neither America (Obama) or NATO challenged him when he invaded Crimea, and the UN stood by and did nothing.

China is claiming islands in international waters in the North China sea, setting up military air bases and ports in violation of international law.  What has the UN or America done to stop the invasion?   Absolutely nothing!

The UN’s attempt to maintain world order and prevent war is a miserable failure at the cost of over $5 Billion a year and over $1 Billion of American taxpayer dollars.

Both China and Russia sit on the UN five-member Security Council and can veto any UN resolution or action and yet China and Russia are open and notorious violators of international law and treaties.  America has to immediately reduce its carbon emissions under the Paris Climate Accord but China, a larger polluter than America, doesn’t have to start until 2030.  That’s fair, isn’t it?

What good is an international body, like the United Nations, that purports to maintain order and stop wars when member states can blatantly ignore policies of that international body and small wars, that America is forced to fight, continue unabated?  What has the UN done about Islamic terrorism?  Nothing!

What American interests are served by being a member state of that body?  What benefit does the American taxpayer get by paying over $1 Billion a year to an organization that does everything in its power to tear down American capitalism, free markets, sovereignty and freedom and instead implements policies that are contrary to American values?  Why would anyone pay someone else to destroy their culture of freedom and put them in chains?  Why indeed!

The United Nations has proven to be a toothless organization that sucks up billions of American dollars to pay a bunch of bureaucrats and diplomats to sit around twiddling their thumbs while “Rome Burns.”  If America continues its membership in the UN, it will swallow America in socialist swill and consume its wealth, its sovereignty and its freedom.

It is way past time for the United States of America to terminate its membership status in the UN and cease paying bribe money to an organization that would sooner see America as a third-world country under the socialist thumb of an elite, international oligarchy, much like the European Union.  The UN and the rest of the 192 other member states want American money and they want it redistributed all around the world.  After all, America has no right to be so rich.

To that end, Congressman Mike Rogers of Alabama has introduced H. R. 193, the “American Sovereignty Restoration Act.”  This bill calls for withdrawing the United States from the United Nations and ceasing payments thereto.  If the bill can make it to committee, it has a chance to expose the United Nations for the hopelessly corrupt organization it is and contrast UN socialist policies to American unalienable rights and individual freedom.

If enough Americans get behind this bill it might have a chance to make it to a floor vote, even though Democrats have shot down similar attempts at UN withdrawal.

A veteran freedom fighter, Tom DeWeese, has put together a Citizens Appeal for Legislative Action to support H. R. 193 and it is available on the American Policy Center website at the following link:

We urge our readers to take a look at Tom’s “Citizens Appeal” and support his efforts.  Tom and I gave back-to-back speeches at a freedom convention in Arizona several years ago.  He has been a guest on many of the same talk shows on which we have been a guest.  Tom has been a tireless fighter against Agenda 21 and UN actions and policies, while defending property rights and American sovereignty.  His efforts are well-known all across America.  If there were many more Tom DeWeeses, America wouldn’t be in the dire straits it now finds itself.

Tell us if you will SUPPORT Tom’s Citizens Appeal for Legislative Action.

Ron Ewart, a nationally-known author and speaker on freedom and property rights issues and author of this weekly column, “In Defense of Rural America.”  Ron is the president of the National Association of Rural Landowners (NARLO) (www.narlo.org), a non-profit corporation headquartered in Washington State, acting as an advocate and consultant for urban and rural landowners.  Affiliated NARLO websites are “SAVE THE USA” (http://www.stusa.us/) and “Getting Even With Government” (http://www.gewgov.com/).   Ron can be reached for comment HERE.

The UN Is Determined To Swallow America and its Wealth added on Sunday, September 17, 2017