Is Fox News Guilty of Defamation?

“TREASON” NOT AMONG MANNING’S CONVICTIONS 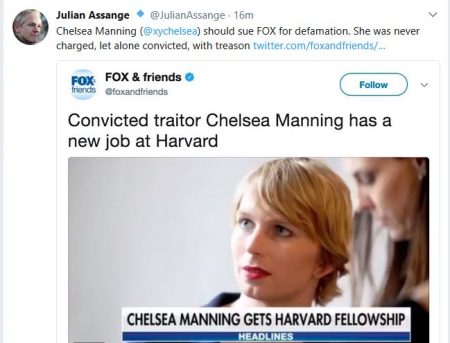 (Sep. 14, 2017) — On Thursday morning, the Twitter account of Fox & Friends of the Box Channel (FNC) treatment news that the former Sgt. Bradley Manning, now known as Chelsea mentioning, “has a new job at Harvard,” the historic Ivy League university located in Cambridge, MA.

The title of the article associated with the tweet began with the words, “Convicted traitor.”

In response, WikiLeaks founder Julian Assange tweeted that Manning “should sue FOX for defamation. She was never charged, let alone convicted, with treason.”

Assange is correct; among the 22 charges Manning face, “treason” was not among them.

Although WikiLeaks never confirms who its sources are, Manning was charged with “espionage, theft and fraud,” among others, stemming from the release to WikiLeaks of hundreds of thousands of pages of classified military and diplomatic documents and video in 2010.

After trial in 2013, Manning was acquitted of “aiding the enemy” and one other charge but sentenced to 35 years in military prison for convictions on a total of 20 charges.

Three days before the end of his second term, Barack Obama commuted Manning’s sentence, and the former Army intelligence specialist was released from prison in May.

As of press time, the original Fox & Friends tweet without Assange’s comment continues to appear in its Twitter timeline accompanied by video from the show wherein co-host Ainsley Earhardt begins the segment with, “Convicted military secrets leaker Chelsea Manning has a new job at Harvard…”

It is unclear as to why the tweet’s headline is different from Earhardt’s spoken one during the show.

Of the elements of a defamation claim, Findlaw.com writes:

Is Fox News Guilty of Defamation? added on Thursday, September 14, 2017

4 Responses to "Is Fox News Guilty of Defamation?"