Inmate Report: “Locked Down and Doing Time with Bed-Bugs” 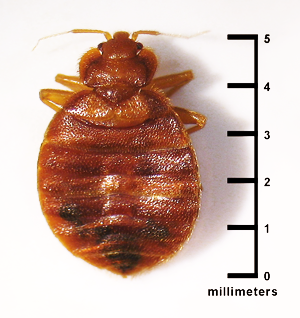 (Sep. 13, 2017) — In a letter received on Monday, an inmate at the South Central Correctional Facility (SCCF) in Clifton, TN reiterated a recent complaint made to WSMV Channel 4 in Nashville that there is a “bedbug infestation” at the facility.

SCCF is owned and operated by CoreCivic, a Nashville-based private prison company which is the largest of its kind in the United States.

The author of the letter has written to us previously describing the presence of “toxic black mold,” poor ventilation, and temperatures reaching 100° or more within inmate cells.  He decried the bedbugs while reporting that resources are currently being expended on “building a new electric fence.”

On September 5, WSMV reported that it received “4 dead bed bugs” from two inmates at the same facility and took them to an expert, Belmont University professor and entomologist Dr. Steven Murphree, who confirmed the bugs’ species.  “I can tell it’s a bed bug. I just haven’t seen one that is so large like that,” Murphree was quoted as having said conducting an examinination.

Murphree added that bedbugs are “blood-feeders” and difficult eradicate.

In Monday’s letter, the inmate additionally stated that scabies and staph infections are common at SCCF and that “prison officials are keeping inmates excessively confined under these squalid dehumanizing conditions.”

On June 8, WSMV reported that a Tennessee women’s prison run by CoreCivic was found to be the source of an outbreak of scabies which spread to court employees, attorneys, and potentially members of their families, prompting the filing of a lawsuit.

In its response to the television station, a CoreCivic spokesman claimed that the company notified the Metro (Nashville) Public Health Department as soon as it became aware of the outbreak.  However, Atty. Gary Blackburn, who filed the lawsuit, alleged otherwise.

On page 2 of his letter, the inmate stated that on August 21, the day of the full solar eclipse, the facility was placed on “lockdown,” meaning that inmates are confined to their cells for up to 23 hours a day because of an emergency situation.  He said that lockdown was not lifted until September 5.

The same circumstance has been a major complaint of dozens of inmates housed at another CoreCivic prison, TTCC in Hartsville, TN, on which The Post & Email and WSMV have reported extensively.

The SCCF inmate is very concerned about the sanitation standards of the institution.  He said that during the lockdown period, inmates did not receive “proper showers” and were not “allowed to clean and sanitize their living areas. The food trays being served daily are left lying around inside the pods, dirty laundry left for days as well, the food is served cold and never in a hotbox but in/on FLOWERS BAKERIES BREAD RACKS that have never seen a dish washer on a daily basis.” [sic]

Throughout his letter, the prisoner emphasized that SCCF forces its inmate population to exist in “squalid dehumanizing living conditions.” 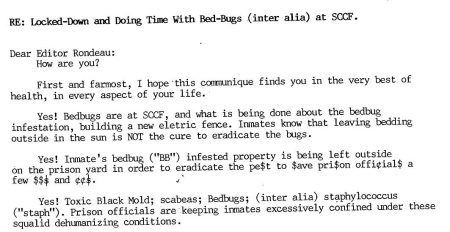 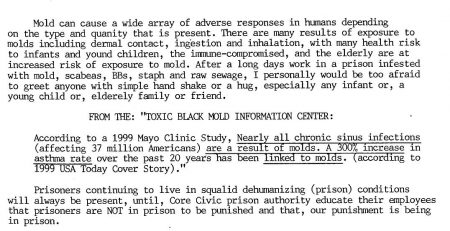 Inmate Report: “Locked Down and Doing Time with Bed-Bugs” added on Wednesday, September 13, 2017

One Response to "Inmate Report: “Locked Down and Doing Time with Bed-Bugs”"