Good Lord, Why Do Americans Put Up With It? 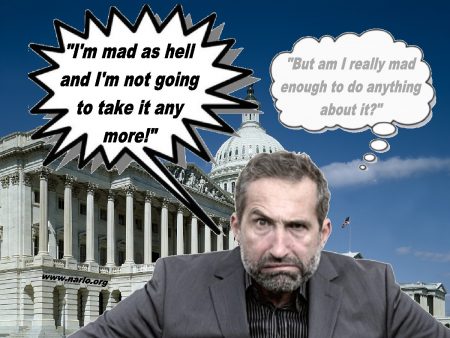 (Sep. 10, 2017) — “Your individual, natural, God-given rights, are only as good as the depth of your willingness and courage to defend them.”    Ron Ewart

Last week in our article entitled “The Distorted Window Through Which Americans Perceive Reality” we talked about the great goodness in the American people.  The American people ARE good and generous, as donations of food, clothing, money and volunteers to the Hurricane Harvey victims attest.  The outpouring of neighbor helping neighbor during this national calamity is inspiring.  And yes, local, state and the federal government are stepping up to the plate as well with leadership, equipment and money.  Nevertheless, we wonder why Americans cannot see how tyrannical government has become and how many freedoms we have lost since we drifted away from self-reliance, individual responsibility and constitutional liberties.

We allow hordes of illegal aliens to invade our country every day and say we can’t do anything about it because we must be compassionate, without acknowledging the dire consequences that that irrational compassion will inflict upon us.  Obama, with his executive orders, has made matters far worse.

We allow our government to slap chains on our wrists and ankles with millions of laws, rules and regulations, without so much as a whimper.

We allow national and international socialism and radical environmentalism to tear down the very foundation of our sovereignty and freedom while we look the other way.

We allow our children to be indoctrinated and brainwashed with the new international, one-world social order and environmental and religious extremism and say we don’t have the time to get involved.

We have allowed special-interest groups to replace the consent of the governed, even though our inaction leads to our own enslavement.

We have allowed a fourth branch of government to grow and metastasize throughout our institutions, a fourth branch that answers to no one, in the rising stench of out-of-control bureaucracies like the EPA, the BLM, the USFW, the Department of Education and most definitely the IRS.

We allow waste, fraud, abuse, corruption, negligence and incompetence to thrive in our government institutions and don’t demand that the perpetrators be summarily fired, fined, or jailed.  We stand back and do nothing while they get promoted and ask for more money to do their job “right.”   We allow government unions to blackmail the taxpayer and put roadblocks in the way to fire incompetent people.

We allow government contracts for mega projects and military hardware to escalate into cost overruns that exceed original estimates by several factors.  Millions grow to billions and then trillions and not even a ho-hum is uttered.

We have allowed entitlements to grow and grow to the point where one day the piper will have to be paid and government will take our savings, or our very souls to retire the debt.  Or some foreign country that holds the debt will confiscate our major assets because we can’t pay.  Some say our unfunded liability now stands in excess of $100 Trillion, and yet government is offering more of the same that will only make matters worse and increase our debt beyond any capability of ever paying it.  We will, for all intents and purposes, go broke, if we stay on the same path.

We shrink in fear and horror when we must send our brave men and women into harm’s way to protect our national interests.  We place a greater value on capitulation and appeasement rather than on strength and victory, in spite of the lessons that history has taught us.  However, we will admit that with the Trump presidency, capitulation and appeasement have been significantly diminished.

We allow our government to cut deals with other countries that violate our very sovereignty and economic security and we do nothing (i.e. NAFTA, CAFTA, Law of the Sea Treaty).

We allow the government to force us to tag every one of our feed stock and domestic animals with a microchip and notify the government of any movements of those animals, as well as letting them know where we live by GPS coordinates, under the U. S. Agriculture Department’s National Animal Index System (NAIS).  How soon will it be before every American is required by government to have a microchip inserted under their skin, or in their earlobe?  And both parties will sanction the policy in the name of national security.  Some corporations are even floating the idea.  How is this any different than the numbers that were tattooed on the arms of Jews in World War II, in the Nazi death camps?

We allow presidents to codify UN social and environmental policies into law by executive order, without ratification by the U. S. Congress, in violation of our Constitution.

We allow our courts to subvert the meaning of the words in our Constitution and fabricate out of thin air government rights and powers that don’t exist.  (i.e. ObamaCare)  We have become so soft that we have allowed the government to convince us that our security is more necessary than our liberty.

But even worse, we have allowed the entertainment industry to redefine our standards of decency.  It has become acceptable to call women “b******” and “h**.”   We spit on the rule of law in rap and hip-hop, as well as in film.  Swear words, once banned, are now common on TV and radio.  The “F” word in movies has become so rampant as to render any story line meaningless.

It is now OK to demean personal achievement as being “trying to be better than anyone else.”  Or we tax the heck out of it.

We have allowed common courtesy to go out the window.  Because of a negative 24-hour news cycle, our children are exposed daily to the worst within us, instead of the best.

While with science, we have eradicated many diseases that were fatal to us, we have allowed honesty, integrity and honor to be diminished from our culture.  We have allowed depravity and bad behavior to define our values, instead of demanding good behavior from each other and those around us.  In other words, almost anything goes today and we find it acceptable!  In the end, lowering the bar of decency could very well be our undoing as a free society.  It has happened before.

This was America, the land of the free, before we decided to become too civil, too compassionate, too cowardly, too weak, too politically-correct and too depraved.  The result of our folly is to have lost our will to confront the enemies of freedom while we seek earthly pleasures.

Everyone cries out for solutions but that solution will never come until we act as one in the defense of the document that secures our individual rights and freedom, our Constitution, no matter what the price or the consequences.  We will not be free as long as we allow the worst in us to define who we are.  Our Founding Fathers pledged their lives, their fortunes and their sacred honor to give birth to this great Nation and our freedom.  How on Earth can we dishonor their sacrifice by standing by and letting what they built descend into the sewer of abject socialism?

If you do not believe in your heart that all creatures cry out for freedom, you do not understand nature.  If you are not aware that your government is doing everything within its power to strip you of your freedom, your eyes are not open, or you choose not to see.  If you do see and do nothing, some may call you a coward.  If you do not know that freedom has a price that you must pay, you are naïve and lack wisdom.  If you stand by and watch while others take up the “sword” of freedom, your soul shall find no peace and your children and grandchildren shall bear the scars of your inaction.

The government’s only hold on you is that they assume you will be law-abiding citizens.  But what if the laws are too many, contradictory, wrong, or unconstitutional?  What then is your duty to obey the law?

Be there not man among you who will rise up against government tyranny that is coming at us from all directions?  Let us show the rest of the world that we are still free people and are willing to do whatever it takes to defend that freedom.  Let us show the politicians and the bureaucrats that we have a spine and that we are “mad as hell and we aren’t going to take it any more.”   If we do nothing, government will not hear us and do exactly as it pleases.  And it is.  The question is, “WHY DO WE PUT UP WITH IT?”  Yes, Americans are good people but that isn’t enough to preserve liberty.

Has America lost her will to be free?  Some of us haven’t, but it would appear that way too many of us have.  The question is, will it take a revolution to restore the greatest experiment with freedom that ever existed on planet Earth?  Or will we restore freedom by peaceful means, before revolution becomes the only solution?

In spite of the negatives we outline here, we are still a great people and there remains a core of courage and wisdom in us to act.  Join with us in this fight for freedom, it being the noblest of all causes.  We are individual Americans and we cannot be defeated, unless we decide that security and mindless compassion, at any price, trumps liberty.  Let the goodness within us replace the evil that has overtaken us and let that goodness direct us to the great heights that American can still attain, but only under freedom.

We are taking action to preserve freedom for a specific segment of America.  For over 11 years we have been helping rural landowners through our organization the “National Association of Rural Landowners” (NARLO).  We provide the tools (powerful “No Trespassing” signs, a rural handbook, consulting) for rural landowners to fend off attacks by local, state and the federal government and the tens of thousands of rules, regulations, restriction and ordinances landowners must face every day.  We offer DISTRIBUTORSHIPS for our powerful “No Trespassing” signs so the landowner can make a little extra money.  We can act as advocates on the individual landowner’s behalf in response to alleged land use or environmental regulation violations.  We can even help if the landowner is having trouble with the IRS.  In short, we are a one-stop shop for the American rural landowner.  In the spirit of freedom, please consider JOINING our worthwhile and necessary efforts.