HAVE “STATE OFFICIALS” BEEN NOTIFIED?

(Sep. 5, 2017) — On Tuesday, The Post & Email received a letter from an inmate at the Trousdale Turner Correctional Center (TTCC) in Hartsville, TN reporting that a female correction officer was sexually assaulted by “10 or so inmates” on August 24 or 25.

The inmate, whose name has been withheld at his request for fear of retaliation, has been a reliable source of information about the privately-run prison for more than a year.  He wrote that prison officials are attempting to keep news of the incident from reaching the media.

TTCC has been the focus of reportage by this publication since early spring 2016, when inmates transferred there from other Tennessee prisons described in dozens of letters an under-staffed, ill-equipped facility where gang members control daily activity and pose a grave threat to “non-affiliated” prisoners.

Both inmates and their relatives have told The Post & Email that in addition to unbridled gang activity, other serious problems exist and have persisted over the facility’s 20-month history.  Those include meals reportedly often served at irregular times and virtually always cold; extreme difficulty in obtaining medical care, including for urgent matters; that the institution is dangerously short-staffed and the employee morale extremely low; and that frequent lockdown periods keep inmates in their cells for 23 hours daily for weeks at a time.

The Hartsville Vidette has reported some of the same allegations while noting that a CCA spokesman last year acknowledged that an assault on an employee must be reported to “state officials.”

Along with seven other prisons in Tennessee, TTCC is owned and operated by CoreCivic, formerly Corrections Corporation of America (CCA).   The TDOC is responsible for providing oversight to all of its 14 prisons, both public and private.

CoreCivic personnel have not been willing to respond to The Post & Email for comment.  In the past, the Tennessee Department of Correction (TDOC) has denied the accuracy of the reports we have received which voice a myriad of complaints and concerns.

However, in March of last year, after less than three months of operation, a TDOC administrator reported that he observed procedural irregularities which included at least one instance of excessive use of force by staff against an inmate.

Before this article went to press, we contacted TDOC spokeswoman Neysa Taylor to ask if she had received notification of the alleged assault.  Taylor’s response came almost immediately and reads:

I have not received a report of a “sexual assault” at TTCC.  I am aware that our Office of Investigations and Compliance are investigating an alleged staff assault at Trousdale Turner Correctional Complex.

In June, TTCC was the subject of a four-part series broadcast by WSMV Channel 4 in Nashville detailing gang activity, a dearth of medical care, and substantiated grievances from former employees.  As referenced on page 2 of the inmate’s letter (below), a former TTCC drug counselor went public with his complaints about the working conditions by contacting WSMV, which issued a report on August 23.

“There has also been a Drug counsler [sic] that was over T-comm here that got fired for nothing but trying to do his job + he has now come forward to channel for news, NBC, Nashville with more stuff that I think will help you,” the inmate wrote of the former TTCC employee featured in the article. 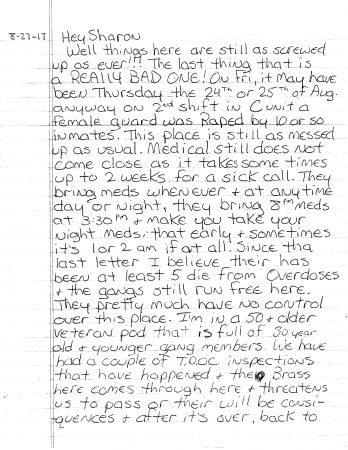 As a side note on page 2, the inmate wrote: 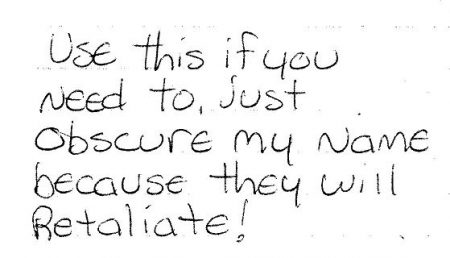