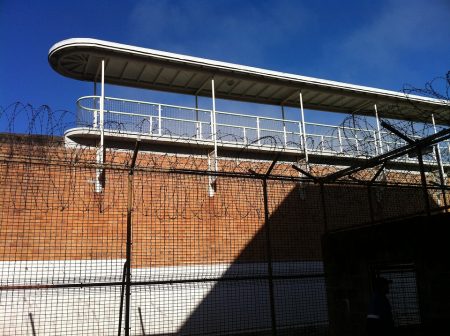 (Aug. 27, 2017) — In a letter received on Thursday, Tennessee inmate Grenda Harmer reported from protective custody (PC) that prisoners in that section of the Morgan County Correctional Complex (MCCX) are provided meals containing half the amount of food received by those in the general population.

In a memo written to Tennessee Gov. Bill Haslam on August 8, Harmer wrote that Warden Shawn Phillips is “allowing Aramark to deprive segregated inmates of food.”

Aramark is the food service company currently under contract with the TDOC.

In the memo, Harmer asked Haslam to order Tennessee Department of Correction (TDOC) Commissioner Tony Parker “to ensure we are fed like the population inmates, and” to “Have Warden Phillips investigated to see if he is receiving any gifts or benefits from Aramark illegally.” 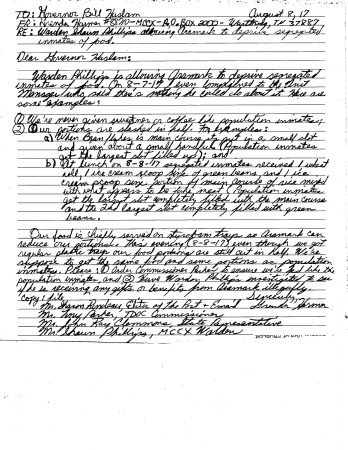 Harmer was briefly placed in the general population following a 32-day hunger strike in which he said he nearly lost his life.  On July 5, he was reportedly found unconscious after having been moved from solitary confinement to general population with a cellmate.  Medical staff provided overnight emergency care. When his blood pressure would not stabilize, he was transported to the University of Tennessee Medical Center, where he remained through July 8.

Harmer’s placement in “general” was short, as on July 28, three gang members were reportedly allowed out of their cells and into the general-population section of the prison. Harmer reported that one of the gang members entered his cell and demanded some of his cellmate’s property while brandishing a knife.

After reflexively “laying hands” on the intruder, Harmer was forced into protective custody for  his own safety given the known proclivities of the institution’s gang members.  He believes that MCCX staff purposely initiated the incident so as to bring about the change, thereby isolating him from other inmates, information, and access to legal materials.

In a second memo addressed to Rep. John Ray Clemmons dated August 19, Harmer described the invasion as an “interesting” development occurring the day after he wrote a letter to an outside party concerning “2 assaults staff did on two inmates.”  Harmer said he copied the letter to Phillips.

“On the evening of July 28, 17 the pod officer open [sic] all the cell doors for pod time on the bottom tier because was pod time for the bottom tier. Then the pot officer went upstairs and opened two or three cells of gang members and then abandoned his post by going out into Center Core offices where all staff offices are. The gang members waited for a few before assaulting me and robbing my cellmate XXXXXXXXXX,” Harmer wrote.

He closed the memo by stating that he will be filing a lawsuit but did not elaborate. 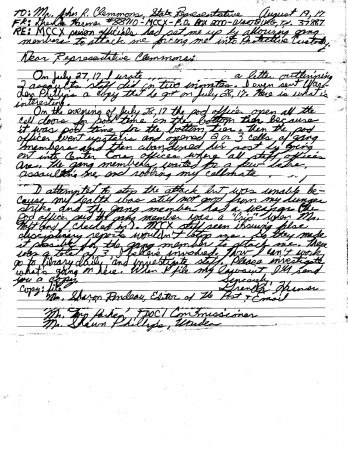