“THE ONE COMMON DENOMINATOR” 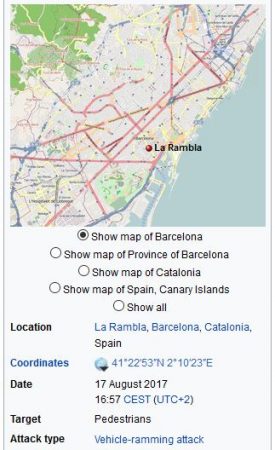 (Aug. 18, 2017) — “Good evening, ladies and gentlemen. My name is Roving and I’ll be your host for ‘Pulse of the Nation,’ the news show that attempts to explain away the insanity in which we find ourselves trapped. What we do is hang out under the awning across the street from the railroad depot and ask regular folk, just like yourselves, what’s bugging them. Excuse me, sir, got time to be interviewed?”

“Oh, hello, Roving. Dog and I watch your show whenever you’re on. What’s the question of the day?”

“Well, what do you do and what are you up to today?”

“I’m retired but I used to work for Homeland Security, which is another way of saying ignore the reasons but do whatever it takes that makes the 6 o’clock news.”

“Means that we all know the reason: Islam and the insanity that it generates, but rather than treat the disease we waste our time and the taxpayers’ money and treat the symptoms: TSA and barricades are just a couple of examples. Look, sorry to run but that’s my train. Bye.”

“Hey, wait up. You said you’re retired, right? Then what’s the hurry? How about telling us more? Go ahead: spill the beans.”

“Satellite technology is the latest catch-phrase, that and cameras everywhere means more security. Really? Not so: they don’t have a clue because government employees remain at the bottom of the food chain, I mean as humans, as a group. Look: 10% of government employees are dedicated and responsible, stellar people, but that still leaves 90% who aren’t. And I think the same could be said for our elected representatives. Now I must leave you.”

“Now I get to read a letter:

Whatever happened to Mr. Turtle, Chief New Leaf, the Rabbit, the Talking Dog, a few others and that fortuneteller: Madam Shylock?

Great Admirer of Your Show

They’re around and we plan to fit them in as often as possible.

“And there he goes, off to ‘retirement land,’ wherever that may be. Ah, here comes a young lady. Hello, Miss, care to be on ‘Pulse?’”

“Well, that would depend, now, wouldn’t it?”

“What’s the question of the day and where’s that talking dog?”

“The question of the day: what about the Department of Homeland Security?”

“You mean like Boston; Ft. Hood; Beltway Sniper; Orlando; Oklahoma; San Bernardino; Chattanooga and all the others, not to mention the events of 9-11.  Is that what you mean?”

“Now that you mention it, yes.”

“But you’re not including the 2002 nightclub bombing in Bali; 2004 train bombing in Madrid; 2005 bus bombings in London; 2016 Nice killings; 2016 Christmas truck killings in Germany; 2017 killings in Barcelona; and we haven’t even mentioned the dead and injured in Israel for the past 60+ years, have we?”

“So what’s the ONE COMMON DENOMINATOR? That’s a rhetorical question, by the way. And one last point: what’s the difference between a Muslim destroying a statue of a human being and a Confederate statue suffering the same fate? You tell me. Half the population of the United States is out to lunch and they’re going to get us all killed. They’ve accepted Muslim terrorism as an everyday fact of life, just as they’ve accepted their 4th Amendment violations every time they go to the airport.

“Molly, our sound-boom operator, is signaling that our time is up and so, on behalf of the crew, I’d like to thank you viewers for watching and to wish you all a goodnight: Goodnight.