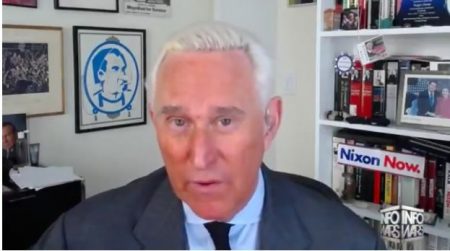 (Aug. 18, 2017) — In a video posted on Friday at the bottom of a report on the departure of White House chief strategist Stephen K. Bannon on Friday, longtime political operative and Trump supporter Roger Stone claimed that Bannon was responsible for preventing information about the trial and later, conviction, of former Maricopa County Sheriff Joseph Arpaio from reaching President Donald Trump.

The misdemeanor criminal conviction could carry a six-month jail term and a fine.

On August 10, Infowars’s Dr. Jerome Corsi reported that just prior to the opening of Arpaio’s trial, Attorney General Jeff Sessions was purposely kept uninformed of a letter hand-delivered by Arpaio’s legal team. “…all attempts to communicate with him failed,” Corsi wrote of the situation at the time.

On Monday, Fox News reported that Trump was considering issuing a pardon to Arpaio.  Earlier on Friday, Infowars’s Dr. Jerome Corsi reported that the pardon has been prepared for Trump’s signature.

Stone further described the combination of three former generals serving, respectively, as Trump’s Chief of Staff, Defense Secretary and national security adviser as “most internationalist and globalist in its own coloration” in an apparent contradiction to Trump’s “America First” agenda.

Although undated, the video was evidently produced after White House Communications Director Anthony Scaramucci was dismissed on July 31 after 11 days on the job, as Stone references Scaramucci’s ouster, attributing it to Scaramucci’s direct access to Trump.

The departure of Trump’s first Chief of Staff, Reince Preibus, was announced on July 29, Trump quickly named then-DHS Secretary Gen. John F. Kelly (Ret) to replace him. It was believed that Kelly would bring order to what some saw as a chaotic first six months and deep divisions among individuals considered part of the Republican “establishment” and those outside of it.

While Stone criticized Bannon for failing to bring in more “Trump loyalists” to the White House, he said that Bannon is not anti-Semitic or bigoted.  However, he predicted that “the cabal of the generals” would oust Bannon eventually for the same reason Scaramucci was terminated.  “It’s because of Steve’s independent access to the president,” Stone contended.

Stone said that Bannon is responsible for the selection of Rex Tillerson as secretary of state, a decision of which Stone obviously disapproves.

“I am deeply disappointed that he didn’t tell the president that Joe Arpaio was being unfairly prosecuted and that prosecution should be halted,” Stone said beginning at 3:05.

On August 5, Stone told Infowars’s Alex Jones that the “three generals” were isolating Trump and firing those supportive of his agenda.  At that time, Stone opined that “The president has everything at hand to save himself. He has the skills, the cunning, the information in the FISA court warrant, the powerful issue of building the wall, and what is already booming as an economy. They hope to lull him to sleep before he realizes that he can still destroy the deep state and lead in the direction that he delineated in the election.”

During the presidential campaign, many Americans indicated they would support Trump because he was not part of the entrenched political “establishment” of either the Democrat or Republican Parties.  Notwithstanding Bannon, however, Stone said in the video posted on Friday that he believes that a “slow-motion coup” is overtaking the Trump agenda.  “The idea here is to seize control of all information, render the president impotent, and set him up for a take-down by the lord high executioner of the establishment,” Stone said.  “That’s what’s really going on in Washington.”