14 Killed in Terrorist Attacks in Spain

HAVE THEY BEEN STOPPED? 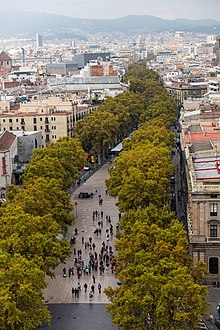 (Aug. 18, 2017) — On Thursday night in Barcelona, two terrorist attacks took place which as of Friday morning have claimed the lives of 14 people.

Barcelona is a prominent cultural, educational, transportation and entertainment hub within Western Europe and the world.

At approximately 5:00 p.m. local time on Thursday, a van attack initially killed 13 and injured more than 100 others on the popular La Rambla promenade, which was filled with locals and tourists.

“Terrorism” was almost immediate deemed the cause.  The driver of the vehicle has not yet been apprehended, although his brother, the person who reportedly rented the van, has been questioned by local police.

It is believed that Driss Oukabir fled on foot after crashing the van.

However, police killed five individuals they labeled “terrorists” in Cambrils, 70 miles south of Barcelona, where a vehicle plowed into a police car and injured a half-dozen people, two seriously.  Another person was pronounced deceased.

The five were said to be “wearing fake suicide belts.”

Over the last 18 months, a number of European cities have been the targets of “unsophisticated” Islamic terrorist attacks in which a vehicle is used to wreak as much death and destruction as possible.  Various forms of terror have been wrought upon Nice, France; Paris and Normandy; Berlin, Germany; Brussels, Belgium; Manchester, UK; North London and London Bridge; Stockholm; and other locations in Germany.

ISIS has claimed responsibility for the Barcelona attack.

The Telegraph reports that Spanish authorities believe a third attack was being prepared involving canisters of gas possibly linked to a gas explosion Wednesday night in Alcanar which took one life.

Prior to Thursday, Spain had not suffered a terror attack since a 2004 set of train bombs killed 192 individuals.