‘THE ONE GUY THAT KNOWS WHERE THAT INFORMATION CAME FROM” 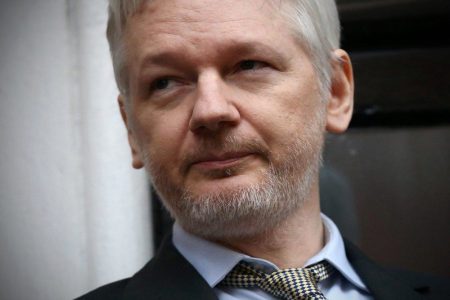 Five years ago, Assange was offered political asylum at the Ecuadorian embassy in the heart of the British capital after he was wanted for questioning in an alleged assault case in Sweden.  While Assange was willing to answer questions and eventually did so to Swedish authorities by arrangement with the embassy in its London quarters, he was unwilling to travel to Sweden because of his belief that he would be extradited to the U.S., where he was indicted by a grand jury for his role in releasing thousands of military documents allegedly provided to him by then-Sgt. Bradley Manning.

Manning was sentenced at court-martial to 35 years in prison but served four years when then-White House occupant Barack Hussein Obama commuted his sentence just before he left office.

Manning is now known as “Chelsea.”

Assange’s WikiLeaks, now in its eleventh year, prides itself on a 100% accuracy rate in its releases of secret government documents from around the world.

The Daily Caller reported that the Assange-Rohrabacher meeting was arranged by “Charles Johnson, a conservative journalist.”  The Post & Email believes, based on the tag at the end of the DC story of “Charles C. Johnson,” that the journalist is the owner of GotNews.com.

On Thursday, Rohrabacher released a statement on his website which reads: 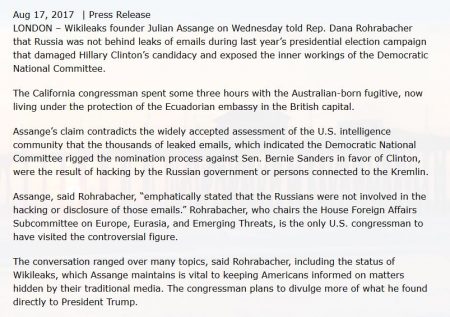 Also on Thursday, as The Post & Email reported, Fox News host Sean Hannity responded to a tweet by New Zealand internet entrepreneur Kim Dotcom, who began in May to assert that he had personally witnessed the transference of thousands of emails taken from the server of the Democrat National Committee (DNC) and provided to WikiLeaks. Dotcom has said that the individual involved, other than himself, was former DNC staffer Seth Rich, who was shot and killed in the early morning hours of July 10, 2016 just steps from his Washington, DC home.

Rich’s murder remains unsolved, and within weeks of his death, Assange announced a $20,000 reward for information leading to the perpetrator(s).

The DNC has said virtually nothing on the matter but named a bicycle rack outside of its Washington, DC headquarters after the slain 27-year-old voter-expansion employee.

As Rohrabacher noted in his press release, U.S. intelligence agencies have reportedly said that the DNC server was “hacked” by Russian-government operatives and the emails stolen, then somehow provided to WikiLeaks. Both Assange and Dotcom contradict that narrative, which first emerged on October 7, 2016, the same day on which WikiLeaks began releasing emails taken from the account of Hillary Clinton’s campaign chairman, John Podesta.

Democrats have insisted that the alleged “Russia” connection to Trump be pursued and speculated widely on information Mueller’s might be discovering in the course of the investigation.

History in the making!

You may start to worry @DNC

Mueller has been leading a bifurcated investigation into whether or not Russia interfered in the 2016 election and if there was any “collusion” between Trump campaign associates and the Kremlin.

Trump denies any wrongdoing and was reportedly told by former FBI Director James Comey that he himself was not the subject of the investigation.

To the public’s knowledge, Mueller has convened two grand juries to examine evidence and possibly gather documents and call witnesses pertaining to the Russia probes.  One is believed to be focusing on Trump’s former national security adviser Michael Flynn, while the other could be examining documentation associated with Trump Jr.’s meeting with a Russian attorney in June 2016.

In a telephone interview from London, Rohrabacher told the Orange County Register of Assange, “He reaffirmed his aggressive denial that the Russians had anything to do with the hacking of the DNC during the election.  He has given us a lot of information. He said there’s more to come. We don’t have the entire picture yet.”

In WikiLeaks’ Twitter account on Thursday evening, a partial statement reads that the U.S. grand jury indictment against him as a journalist is “unconstitutional:” 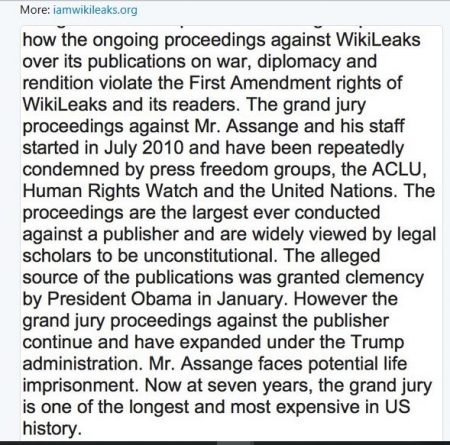 [Editor’s Note:  10:05 p.m. — Hannity is currently discussing Assange’s claims on his show, including a January 3 meeting between Hannity and Assange in London.]

The Washington Times reported that Assange’s attorney also attended the meeting with Rohrabacher, while The Daily Caller reported that Johnson was present.

While Assange does not reveal his sources, he has strongly suggested that Rich was one of them.

As if in lockstep, the mainstream media has insisted that Rich had nothing to do with releasing the DNC emails but provided no evidence to support its position or its ridicule of Hannity, who has explored the possibility, placing his advertising revenue at risk by ideologically-driven media opponents.

At 10:15 p.m., during an interview with commentator Michelle Malkin, Hannity described Assange as, “The one guy that knows where that information came from,” referring to the DNC emails.

Does Julian Assange Hold the Key to the “Russia” Narrative? added on Thursday, August 17, 2017