“SOLUTIONS ARE NOW FULLY IN PLACE” 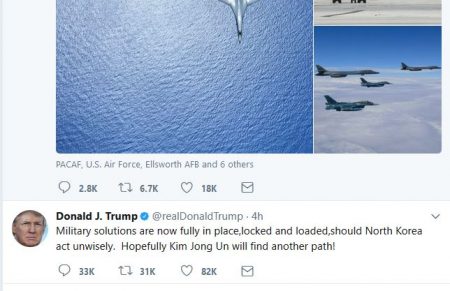 (Aug. 11, 2017) — At approximately 7:40 AM EDT on Friday, President Donald Trump tweeted that the “military solutions are now fully in place” and “locked and loaded” in the event that North Korean dictator Kim Jong-Un does not cease his aggressive behavior in launching missiles and threatening the island of Guam, among other locations.

Trump’s tweet was preceded by approximately nine hours by one from the U.S. Pacific Command stating, “#USAF B-1B Lancer #bombers on Guam stand ready to fulfill USFK’s #FightTonight mission if called upon to do so https://go.usa.gov/xRV8p“.

Pacific Command’s tweet is partially shown with Trump’s in the graphic above, as Trump retweeted it.

The link in Pacific Command’s tweet leads to the website of the Pacific Air Forces and an article with photographs titled, “South Dakota Airmen arrive ready to ‘Fight Tonight’ from Guam” published on August 8.

The article reported that on August 7, “two sequential bilateral missions” involving the U.S., Republic of Korea, and Japan took place over a ten-hour period.  “These flights with Japan and the Republic of Korea (ROK) demonstrate solidarity between Japan, ROK and the U.S. to defend against provocative and destabilizing actions in the Pacific theater,” reads a caption beneath photo #5.

North Korea has been threatening the U.S. and its Asian neighbors from months, although its desire to develop nuclear arms has been known since at least the mid-1990s.  On Tuesday, a North Korean military spokesman declared that Kim Jong-Un is considering firing four simultaneous missiles by mid-month at the island of Guam, a U.S. territory located in the Philippine Sea approximately 2,100 miles from the rogue communist nation.

The rhetoric from North Korea continued on Wednesday after Trump announced that any military move on Jong-Un’s part would be met with “fire and fury like the world has never seen.”

Guam is home to Andersen Air Force Base as well as a Navy base.  North Korea specifically targeted Andersen in a statement on Tuesday.

Some believe that the Clinton, George W. Bush, and Obama administrations either miscalculated or poorly handled the threat which North Korea has posed to the world.  In remarks following a national security meeting on Thursday, Trump told reporters that while he would prefer that the world disarm itself of nuclear weapons, at present, given the North Korean threat, nuclear capability is a necessary component of the U.S. defense arsenal.

As stated by Pacific Command, B-1 bombers are an intrinsic part of the U.S. defense plan against North Korea should the need arise.

The hashtag #FightTonight shows tweets which are both critical and laudatory of Pacific Command’s use of the term as well as Trump’s “locked and loaded” tweet.