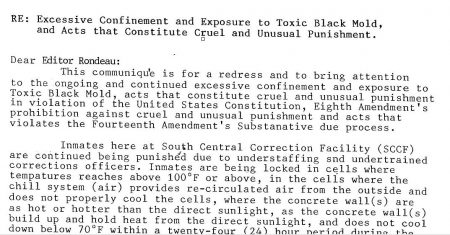 (Aug. 7, 2017) — In a letter received on Monday dated August 1, 2017, an inmate at the South Central Correctional Facility (SCCF) in Clifton, TN reported that over the summer, cell temperatures have reached or exceeded 100°F due to a faulty air-circulation system.

He said that “toxic black mold” is a serious health hazard there, caused and/or exacerbated by the high temperatures and lack of adequate cooling throughout the facility.

According to one source:

Black mold is a type of fungus that can grow indoors. Like all molds, black mold loves moist environments, so areas that are often damp, such as wet basements, showers, bathrooms, and areas where there’s a leak, are prone to mold growth. Because some kinds of black mold can cause allergic reactions, asthma attacks, and respiratory issues, it’s important to remove it when you do find it in your house. The trick to killing black mold is penetrating the mold and killing the roots as well as the surface mold, and taking steps to ensure it doesn’t return.

“Inmates are being locked in cells where temperatures reaches [sic] above 100°F or above, in the cells where the chill system (air) provides re-circulated air from the outside and does not properly cool the cells,…” the inmate wrote on the first page of his two-page, typewritten letter.

SCCF is a private facility, owned and operated by CoreCivic, formerly Corrections Corporation of America (CCA), founded in Nashville in 1984. The company’s CEO, Damon Hininger, receives more than $3 million in salary annually, according to Bloomberg.

The corporation has prisons throughout the Southwest, Mountain West and the District of Columbia in addition to detention and transitional facilities.  On the federal level, CoreCivic’s institutions are used to house illegal aliens on a temporary basis.

Last August, then-Deputy Attorney General Sally Yates announced that the Justice Department would not renew its contracts with private prison operators, but the new attorney general, former Alabama Sen. Jeff Sessions, quickly reversed that policy after he was sworn in this past winter.

Decisions made at the federal level involving the U.S. Bureau of Prisons are not imposed on the individual states.

“If it is illegal for a person to leave a dog, cat, or other animinals in places without proper ventilation or proper water to drink and in bad climate, then where is the care and concerns for a fellow human (inmate/prisoner) that is left in the hands of the for-profit (Core Civic/CCA) prison officials to be denied the same quality of LIFE than is provided to other animals,” the inmate asked rhetorically in his third paragraph.

He echoed a frequent complaint among those housed at Tennessee’s CoreCivic institutions:  that staffing is woefully inadequate and those employed as correction officers are poorly-trained.

Beginning in the spring of 2016, dozens of inmates at Core Civic’s Trousdale Turner Correctional Center (TTCC) in Hartsville, TN reported that although classified as minimum-security, they were kept in circumstances similar to those of maximum-security prisons with 23-hour “lockdowns” sometimes lasting for weeks.

One inmate who spent time at both TTCC and SCCF said that conditions, including medical care, at SCCF were “worse” than at TTCC.

CoreCivic has declined all of this writer’s requests for comment via email, telephone and formal letter.

The letter received today reported the same frequent “lockdown” situation.  “I arrived here May XX, 2017, and has [sic] been locked-down more than three (3) weeks during the period of my stay here at SCCF, notwithstanding the fact that as a insulin dependent diabetic, I am forcer to sit in the medical waiting room for more than three and one-hale (3 ) hour(s) daily just for my insulin injection(s.),” he reported.

[Editor’s Note:  The exact date of the inmate’s arrival has been redacted to avoid retaliation.]

In February, a small group of diabetics filed suit against TTCC, CoreCivic and the Tennessee Department of Correction (TDOC), alleging inadequate care for their medical condition.

Between June 19 and 22 of this year, WSMV Channel 4 ran a special four-part series revealing chronically-inadequate medical care at TTCC which reportedly culminated, in one case, of an inmate performing surgery on himself in an attempt to escape from his pain.

Further, the inmate’s letter said that the available drinking water is “HOT.”

“This for-profit Core Civic/CCA prison officials by their deliberate indifference are doing nothing about the Toxic Black Mold that exist through out the prison and causing myself and other inmates serious medical complications, as Toxic Lack Mold is a silent killer,” he wrote on page 2. “The prison is so infested with this Toxic Black back Mold that it is in my bed and the beds of other inmates as well, and prison officials are doing nothing at all but keeping inmates locked in their cells as much as possible and for any reason.”

He equated the conditions to “cruel and unusual punishment,” which is outlawed by the Eighth Amendment to the Bill of Rights.