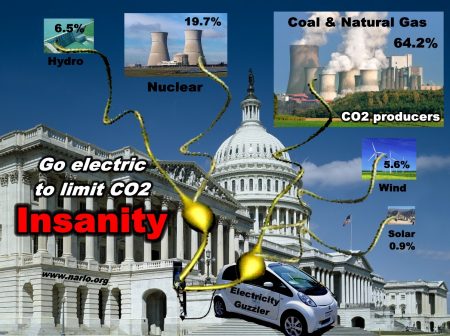 (Aug. 6, 2017) — The environmental obsession to wean the planet off of fossil fuels has blown up into an insanity all its own.  Next to man-caused global warming (climate change) the deadly game that governments have played to convince people to disconnect themselves from the wonders of efficient crude oil using the force of government, is the biggest ruse ever perpetrated on the masses since the dawn of civilization.

From climate change, to ethanol made out of corn, to wind and solar energy and now to electric cars, these con games have escalated into a full-blown racketeering enterprise where the rich and politicians get richer and the people get poorer …. from a bald-faced lie.  Americans especially have been played for suckers because most of these “games” that government and the environmentalists are playing have a second purpose ….. wealth re-distribution to the rest of the world.  That was and is what the Paris Climate Accord was all about.  Why do you suppose Europe was all for it and moaned and groaned when Trump pulled the plug on the Accord?  Europe and the other 192 UN countries want American dollars ….. for free.  Trump’s action is probably one of the most sane things an American president has done in decades.

However, before we delve into wind and solar energy, let’s first dump all over the electric car.  A known source describes it quite openly, albeit with some overstatements.

“Ever since the advent of electric cars, the REAL cost per mile of those things has never been discussed.  All you ever heard was the MPG in terms of gasoline, with nary a mention of the cost of electricity to run it.”

“At a neighborhood BBQ I was talking to a neighbor, a BC Hydro executive, I asked him how that renewable thing was doing.  He laughed, then got serious. If you really intend to adopt electric vehicles, he pointed out, you have to face certain realities.  For example, a home charging system for a Tesla requires a 75-amp service. The average house is equipped with 100-amp service.  On our small street (approximately 25 homes), the electrical infrastructure would be unable to carry more than 3 houses with a single Tesla, each.  For even half the homes to have electric vehicles, the system would be wildly over-loaded.”

“This is the elephant in the room with electric vehicles.  Our residential infrastructure cannot bear the load. So as our genius elected officials promote this nonsense, not only are we being urged to buy these things and replace our reliable, cheap generating systems with expensive, new windmills and solar cells, but we will also have to renovate our entire transportation delivery system!  This latter “investment” will not be revealed until we’re so far down this dead-end road that it will be presented with an ‘OOPS!’ and a shrug.”

“If you want to argue with a green person over cars that are eco-friendly, just read the following.  If you ARE a green person, read it anyway. It’s enlightening.”

“Eric test drove the Chevy Volt at the invitation of General Motors, and he writes, ‘For four days in a row, the fully charged battery lasted only 25 miles before the Volt switched to the reserve gasoline engine.’  Eric calculated the car got 30 mpg including the 25 miles it ran on the battery.  So, the range including the 9-gallon gas tank and the 16 kwh battery is approximately 270 miles.”

(Note:  This is where the overstatements come in.  Other sources show much less in costs per KWH than does this person and battery charge times appear to average around 4 hours, as compared to a five-minute fill-up at your local gas station.  Nevertheless, if you are driving across country do you have time to wait four hours for each charge?  Ludicrous!)

“The gasoline-powered car costs anywhere from $25,000 to $40,000.  The Chevy Volt cost is in the high range of those numbers.   Nevertheless, the American Government wants loyal Americans not to do the math, but buy an electric car that costs considerably more to run, and takes three times longer to drive across the country.  And let’s not forget the $7,500 subsidy of your tax money that subsidizes every purchaser of an electric car.  As of December 2016, 542,000 electric cars have been purchased in America.  At $7,500 per car, that amounts to over $4 Billion of your money being spent to subsidize electric cars because they can’t stand on their own and very few customers will buy the expensive electric cars without the subsidy.  Calculate the $4 Billion subsidy into the cost to run an electric car.  It comes to around 50 cents per mile.”

“Then there is enormously expensive deep-cycle battery.  It may last three years!  The lithium electric car batteries can cost anywhere from $500 to $650 each.  Total replacement of a battery pack can run well over $3,000.

The more electric cars on the road, the greater the energy demand on current generating capacity (that includes fossil fuel generation) and increased loads on the grid, even though most urban charging would be at night in residential settings. That’s great for single-family homeowners, but what does the apartment-dweller use to charge his electric car?

With electric cars, all the environmentalists and the government are doing is to exchange one form of efficient energy (gasoline) for another form of energy, electricity.  Both forms of energy create CO2.

Environmentalists have stopped all hydroelectric generation and have slowed nuclear and coal-fired power plants to a trickle.  Wind and solar are grossly inefficient as compared to other energy sources and require government subsidies and storage capacity for low or no wind and sun energy.  Many power plants must stay online to cover the energy loss when wind and solar drop off the grid.  It takes time to fire up a power plant from a cold start.

We won’t go into ethanol from corn.  It mostly keeps the State of Iowa in the chips and sucks up millions of bushels of corn (a food source) and agricultural land every year, not to mention the cost in fossil fuels to refine corn into ethanol.  This is just another environmental boondoggle that costs more money than the benefits derived from it.

Here are the major energy sources and percent shares of U.S. electricity generation at utility-scale facilities in 2016. 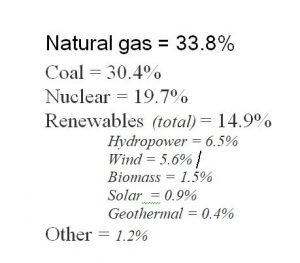 Wind power is only 5.6% of the total and solar is under 1%.  Just how are you going to replace fossil fuels, like natural gas and coal, with wind and solar energy?  You can’t!  Then, if you wipe out coal, (30.4%) as the environmentalists and government want to do, we suddenly find 330 million Americans living with constant brownouts and rationed energy like they do in North Korea.

We would be derelict if we did not mention one of the greatest national and international cons of all time, man-caused global warming, the name changed by the climate alarmists to “climate change” to dupe the naïve public.  Of course the climate changes!

Fortunately, this international conspiracy climate nonsense is going to be challenged by a “red team” being assembled by the Trump Administration and Scott Pruitt, Secretary of the Environmental Protection Agency (EPA), along with a team from the Heartland Institute. The Heartland Institute continues to publish reports challenging the International Panel on Climate Change (IPCC) and other climate scientists, which it began eight years ago. The group has produced four volumes of “Climate Change Reconsidered,” with a fifth coming out later this year.  We have also assembled many credible articles challenging the IPCC climate model predictions on the NARLO website.

So you see, ladies and gentlemen, you are being led around by the nose and herded into neat little corrals like cattle, by Democrats and Progressives and their loyal associates, national and international radical environmentalists, socialists, central bankers and the one-world-order crowd.  And if you were hoping that Trump and the Republicans would clear up this hopelessly corrupt mess, you are living inside a bubble that is about to burst.   YOU THE PEOPLE aren’t YOU THE PEOPLE any more and maybe you never have been.

Sure, Americans can change it, if there were enough of them that cared and were willing to risk it all to throw a monkey wrench into the current, heavily-entrenched political “System” (some call it the Deep State) that would shut it down so that we could start over.   (See “ “The ‘System’ – Impenetrable, Inflexible and Un-Yielding!”)  But to be successful, it would take a powerful, charismatic leader with a “give me liberty or give me death” agenda and millions of loyal Americans willing to join him (or her), along with a large bank full of $100 bills.

Remember!  Government fears the people only when there are millions of them and they act in unison for a common purpose.  Right now, there is no charismatic leader, there are no millions of dedicated and united Americans to join him, there is no liberty agenda and there isn’t enough money to fund more than a token effort, which would be put down posthaste by government forces.  Trump will try, but he will be thwarted every step of the way by the powerful forces of the “System.”  To beat all the “cons” that are being foisted on a naïve public by government (the “System”) you have to attack it from the outside because those on the inside have no incentive whatsoever to change it.

The “idea” of liberty that arose in 1776 only resonated with the colonials because of the heavy hand of a tyrannical British government that did not want part of its empire to secede and was willing to punctuate its authority with brute force.  The colonials challenged that brute force and surprisingly won, against all odds.

But today, what most people don’t realize is that the tyranny of the British Empire in 1776 is a fraction of the tyranny of the current American government.  Instead of punctuating the American government’s authority by brute force, it does it by the explosion and complication of the “rule of law” and the police enforcement thereof.  It also does it by propaganda, cons, myths, distortions and outright lies.  Remember ObamaCare? “You can keep your doctor and your insurance.”   The fact is, government, at all levels, has lost all credibility and cannot be trusted and should therefore be resisted by all means possible.  Sadly, most Americans have such a fear of government that resistance is the farthest thing from their minds.

5 Responses to "Government Has Americans Conned Six Ways From Sunday"