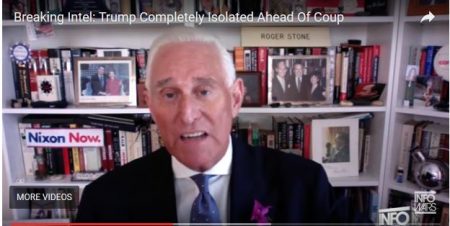 The video appears at the bottom of an article by Kit Daniels on a different but related topic recently discussed by radio show host Michael Savage and is titled, “Breaking Intel:  Trump Completely Isolated Ahead of Coup.”

As he has done in the past, Jones opened the interview alone, speaking directly to his audience.  He brought in Stone at the 6:10 mark, asking him to “Please break it down,” meaning the significance of recent White House events as Stone sees them.

Stone told Jones that he believes that a “soft coup in progress” was launched in the midst of the departure of White House Chief of Staff Reince Preibus and Communications Director Sean Spicer, ushering in Gen. John Kelly (Ret) as Preibus’s successor.  “The reason I say this is because a source at the very highest level of the administration tells me that Kelly seems to choke off all communications between the president and his associates, friends and many supporters.  Secondarily that the generals – Kelly, McMaster and Mattis – have agreed that no two of them will be out of town at the same time; in other words, the president needs to be babysat, and, quite incredibly, that any military order given by the president must have the unanimous notification and approval of the three generals.  That borders on the treasonous…,” Stone said.

Increasingly last week, McMaster was said by many Trump supporters and by news reports to be firing people supportive of the Trump agenda but retaining Obama “holdovers” within the national security apparatus.

Speaking of Trump, Jones responded to Stone with, “The law says that he’s the commander-in-chief…We have to start going on air the minute we learn this stuff.”

Making a comparison between President Richard Nixon’s advisers, Stone said that Nixon’s chief of staff, Gen. Alexander Haig, and his secretary of defense, James Schlesinger, had insisted that they approve any military command Nixon might have issued.

Jones characterized Stone’s account of attempts at control of the administration as certain individuals intentionally “cutting off the info” from Trump. Stone responded that while people should not be allowed to seek out Trump unfettered, Trump is “naturally inquisitive” and regularly contacts individuals who he believes have the information he needs to make decisions.

“The generals seek to totally control information…Somebody needs to know this,” Jones responded, contending that information Trump wants dispatched to a particular individual is currently being “misdirected somewhere else,” allegedly by means of the National Security Agency (NSA).

Jones then said that Stone possesses information which is “too dangerous” not to release concerning White House machinations.  Stone responded with, “Everything you have said I have heard to be anecdotally true.  More than one person has told me that they were instructed to send things to the president but that they could not get the information to him.”

Expounding on that point, Stone claimed that Trump has not received briefings on several important matters, including the published findings of the secretive FISA court involving Obama-regime spying and unmasking of U.S. citizens.

Arpaio had sought an emergency stay of the trial, which began on June 26, at the U.S. Supreme Court, as well as trial by jury.  The high court refused to intervene.

Arpaio was referred for criminal prosecution in May of last year after U.S. District Court Judge G. Murray Snow found him guilty of civil contempt of court for extending his immigration patrols for 18 months beyond the time when Snow ordered them stopped.

While serving as sheriff, Arpaio had taken a strong stance against illegal aliens in the county.  During the George W. Bush years, Arpaio had been approved to participate in the 287(g) program coordinated by the Department of Homeland Security (DHS) and its subsidiary, ICE, which deputizes local law enforcers to apprehend and turn over illegals to federal authorities.

Jones claimed that Trump’s inner circle is attempting to cut off Trump’s internet access.  “This is textbook preparation for coup,” he claimed.

Both men agreed that the dismissal of Anthony Scaramucci, after a ten-day introductory period in which he was expected to assume the role of White House Communications Director, was a detriment to Trump.

Expressing his concern for “globalists” and “radical elements of Islam pouring in,” Jones asked, “How would you characterize this historic moment we’re in?”  Stone responded:

The president has everything at hand to save himself.  He has the skills, the cunning, the information in the FISA court warrant, the powerful issue of building the wall, and what is already booming as an economy.  They hope to lull him to sleep before he realizes that he can still destroy the deep state and lead in the direction that he delineated in the election.

On July 31, Press Secretary Sarah Huckabee Sanders told reporters at the daily briefing that “General Kelly has the full authority to operate in the White House, and all staff will report to him.”

One Response to "Alex Jones: “Real Deep-Staters” Working Against Trump"