“AT NO POINT IN TIME DID MR. WHEELER SAY…” 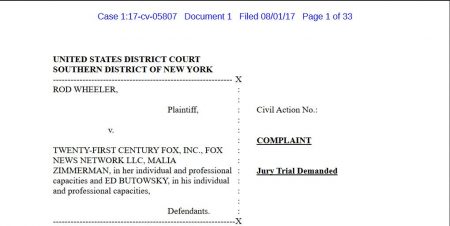 (Aug. 1, 2017) — On Tuesday morning, NPR published an article detailing a federal lawsuit filed by former homicide detective Rod Wheeler naming Fox News Channel; one of its reporters; and a private individual, Ed Butowsky, as defendants, claiming that the parties concocted a plan to dispel the theory that Donald Trump and/or his campaign aides worked with the Russians to help him win the 2016 presidential election.

Butowsky is reportedly an “unpaid” FNC contributor and private businessman based in Texas who sought an alternative route to find the killer(s) of 27-year-old Seth Rich.  Rich, a DNC staffer who oversaw a portion of the DNC’s voter registration effort, was shot twice in the back close to his Washington, DC townhouse in the early hours of July 10, 2016.

He was transported to an unidentified hospital, where he died.  Since that time, at least five parties have offered a combined several-hundred-thousand-dollar reward for information leading to the apprehension of those responsible, but no one has come forward.

The DNC is not one of the parties offering reward money.

Following the publication of NPR’s article, virtually all of the U.S. mainstream media and some overseas publications wrote their own articles about the allegations, and the topic has been trending on Twitter on Tuesday with thousands of tweets.

At 2:32 p.m. EDT, a reporter asked White House Press Secretary Sarah Huckabee Sanders about the NPR story at the daily briefing.  Sanders referred the reporter to “the parties involved,” which she said do “not include the White House.”

Sanders added that “the president didn’t have knowledge of the story.”  Bringing yet more attention to the unsolved mystery of Rich’s death, a second reporter asked a question at the end of the presser about the allegation that Trump was involved which Sanders ignored, having already adjourned the briefing and left the podium.

NPR said it was provided the text of the suit exclusively, although it has since been published by CNN.

Butowsky reportedly hired Wheeler to investigate Rich’s murder as a favor to Rich’s surviving family members and out of frustration that the Metro DC Police Department’s investigation appeared not to be yielding results.

Wheeler’s attorney in the suit, Douglas Wigdor, claims that the FNC reporter and Butowsky conspired with the White House to push the narrative that Rich supplied incriminating DNC emails to WikiLeaks, which were published beginning on July 22, 2016, so as to prove that there was no “collusion” between the Trump campaign and Russia. In a number of statements, Wigdor purports to know what the reporter and Butowsky were thinking in crafting their plan to protect Trump and elicit statements from Wheeler about the Rich case which Wheeler now claims he did not make.

The two quotes at issue were included in the reporter’s May 16, 2017 article which FNC removed from its website one week later.

Three agencies of the U.S. intelligence community have said that the DNC servers were “hacked” by Russian-government operatives.  WikiLeaks founder Julian Assange has said that no “state party” provided the emails to his organization.

Butowsky told CNN on Tuesday that the claims Wigdor and Wheeler made are false.  The reporter has not personally commented, but Fox News has denied that her statements quoting Wheeler were done so inaccurately.

Former White House Press Secretary Sean Spicer, who is said in the suit to have met with Butowsky about the Rich case, denied providing any information from the meeting to the president and said he had no knowledge of anyone else speaking to Trump about it.

The Post & Email has a printed copy of the FNC article, which was reposted and still appears at WTPC News.  The first quote with which Wheeler takes issue reads:

My investigation up to this point shows there was some degree of email exchange between Seth Rich and WikiLeaks.

Page 20 of the lawsuit acknowledges that Wheeler appeared on a local Fox affiliate, Channel 5, based in Washington, DC, the evening before FNC published its article.  “At no point in time did Mr. Wheeler say that his investigation revealed that Seth Rich sent any emails to Wikileaks…,” that section begins.

The lawsuit claims that Wheeler attempted unsuccessfully to have FNC executives issue a correction as to the quotes he claimed were mistakenly attributed to him as well and to extend to him an apology.

However, that claim contradicts a Fox 5 clarification issued on May 16 relating to Wheeler’s appearance on the station the night before, May 15, 2017.

The clarification reads, in part:

What he told FOX 5 DC on camera Monday regarding Seth Rich’s murder investigation is in clear contrast to what he has said over the last 48 hours. Rod Wheeler has since backtracked.

In an interview Monday, Wheeler told FOX 5 DC he had sources at the FBI confirming there was evidence of communication between Seth Rich and WikiLeaks. This is the verbatim of that exchange:

FOX 5 DC: “You have sources at the FBI saying that there is information…”

FOX 5 DC: “…that could link Seth Rich to WikiLeaks?”

In the past 48 hours, Rod Wheeler has told other media outlets he did not get his information from FBI sources, contradicting what he told us on Monday.

The original Fox 5 interview with Wheeler is here:

During that appearance, Wheeler claimed that the investigation was being stymied for “political” reasons.

The May 16 FNC article states, following the first quote attributed to Wheeler, that “Wheeler made his comments on the possible Rich-WikiLeaks connection in a story first reported Monday night by Fox five DC” and contains a hyperlink to the original Fox 5 DC story which also contains the clarification.

Fox 5 was excoriated by other media outlets and threatened with legal action if it did not retract its story.

Wheeler’s several interviews with various media on the case are available on YouTube.

In the above interview with Sean Hannity on May 16, Wheeler referenced a “federal investigator” who he said he found credible regarding the claim that Rich had been in touch with WikiLeaks.  He did, however, say that he had not personally seen the evidence that Rich had sent emails to WikiLeaks.

The Rich family claimed through a spokesman that Wheeler was contractually barred from speaking with the press.  WND has reported that Wheeler has been dismissed from the investigation.

WikiLeaks’ founder, Julian Assange, has strongly suggested that Rich was a source of documentation for the open-government organization which claims a 100% accuracy rate in its 10+ years of operation.  FNC’s Sean Hannity has interviewed Assange on several occasions.

Hannity, also, was highly criticized for beginning to investigate the Rich murder, and a campaign was launched by left-wing organizations to convince his FNC advertisers to drop their support.  As with Bill O’Reilly, the goal likely was for Hannity’s show to be canceled.

After several nights of coverage, Hannity announced that out of respect for the Rich family, he would not be reporting further on the case for the time being.

Late last week, several reports, including at FNC, were issued suggesting that there is a tie between a former congressional IT employee, Imwan Arwan, and the tens of thousands of DNC emails released to WikiLeaks last summer, a claim The New York Times attempted to downplay.

On July 25, FNC’s Geraldo Rivera remarked on air that The Times had not yet covered the developing and potentially explosive story, which may involve a number of former congressional aides, their relatives, and “several dozen” Democratic congressmen for whom they worked.  Three days later, the “paper of record” issued a report.

The Daily Caller, which broke the story of Arwan on February 4, 2017, reported at the time that three brothers by that last name, all of whom worked in IT for the Democratic congressmen, “are suspected of serious violations, including accessing members’ computer networks without their knowledge and stealing equipment from Congress.”

Former DNC chairman and Florida congressman Debbie Wasserman Schultz continued to employ Imran Arwan despite the brothers’ having been “relieved of their duties” in February.  Schultz changed her stance after Arwan was arrested last week at Dulles Airport readying to board a flight to Pakistan.

“According to a February Politico report, Awan and several other staffers, including his wife, were under investigation for equipment and data theft from Democratic House members. His wife was fired in March and moved to Pakistan, but Awan was kept on Wasserman Schultz’s staff until his arrest Tuesday,” UPI reported on July 26.

Wheeler’s lawsuit claims that Fox News, Butowsky and Trump attempted to push “fake news” through Wheeler and that the reporter and Butowsky’s desire to do so emanated from “political motivations.”

On page 25, the brief claims that FNC attempted to hide its intent to “influence American politics” through the issuance of its May 16 article during negotiations with British media regulators for “control” of Sky, a media company which News Corp founder Rupert Murdoch has long sought to purchase.

The suit goes on to accuse Butowsky of “extortion” and FNC of racial discrimination against Wheeler.

On May 16, Trump was reported to be a Trump supporter by Heavy.com.