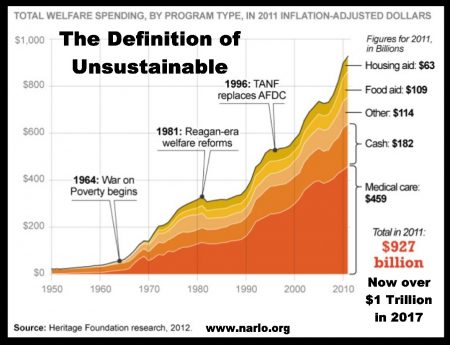 (Jul. 23, 2017) — “I am for doing good to the poor, but…I think the best way of doing good to the poor, is not making them easy in poverty, but leading or driving them out of it.   I observed…that the more public provisions were made for the poor, the less they provided for themselves, and of course became poorer.  And, on the contrary, the less was done for them, the more they did for themselves, and became richer.”  —     Benjamin Franklin

Our guilty conscience is working overtime these days.  It seems, according to many politicians and pundits, that we and the rest of productive humanity are somehow responsible for the inequities and social injustices being perpetrated on the poor, who are trapped in “poor-dom,” by those of us who are a little better well-off.   The pundits and politicians want to rectify this tragic injustice (and have) by doing what the socialist Karl Marx advanced, and that is to “take from those with the greatest capability (those of us who are a little better well off) and turn our sweat, blood, tears, effort and money over to those with the greatest need;” you know, those poor folks who are forever trapped in “poor-dom.”  Who gets the job of turning our tax money over to those hapless victims, the government of course, the great champion of the poor, the aged and the downtrodden, or the Blacks, Latinos and the LGBT crowd ….. in exchange for votes?

But of course there is no cost to the managers of the government welfare, only to the people.  The government essentially uses the power to tax, by force of the gun (just try not paying your taxes) and sets up social programs, staffed with thousands of government employees, to administer to these victims who have allegedly been discriminated against by the rest of us because they live in “poor-dom,” or whatever.

But the government welfare programs siphon off huge chunks of our taxes for these high-paid, over-educated, “irrationally compassionate” administrators, and only a limited percentage ever gets to the poor.  In 2011 over $60,000 was spent by the government on each household existing below the poverty line covering almost 17,000,000 people.  But $60,000 per household is almost three times the amount the average household lives on per year.   So where is the rest of your tax money going?  It’s going to pay the salaries of hundreds of thousands of state and federal employees administering the welfare programs.  In fact six years ago, the states were charging over $5 billion back to the federal government every year for welfare management costs, and it’s been rising dramatically every year since Obamacare was passed with the massive expansion of Medicaid.  That doesn’t include what the federal government spends on welfare management.  (More on WELFARE SPENDING from the Heritage Foundation)

But here is the other side of the alleged inequity and social injustice issue about which the politicians and pundits won’t speak.  It is a fact.  Every segment of society is discriminated against, some more than others.  If you are too fat, too thin, too tall, too smart, too dumb, too young, too old, too ugly, too inexperienced, infirm, disabled or mentally challenged, you are discriminated against, because humans, by their very nature, are discriminatory.   If you think Americans are discriminatory, try going to Asian countries where the only hair color is straight black, not blond, not brown and not curly.

But discrimination is in fact the challenge of life and a challenge that most folks win over, eventually, unless the individual has bought into the myth that he or she is a victim, because government has convinced them they are.  The government is a master at making those living in “poor-dom,” or ethnic races, or other variations of human behavior into thinking they are victims and it is the fault of the rich that they must suffer these indignities.  In contrast, there are millions of examples of individuals who have overcome man’s discriminatory nature and moved forward with their lives, no matter their station in life.  The real truth, that everyone seems to ignore, is that achievement transcends race, color, creed, natural origin, or any of the other previously mentioned, discriminated-against characteristics.

If you or others have convinced you that you are a victim, if your role models are the dredges of society, if you refuse to take responsibility for your life, if mediocrity is the best you have to offer, then you will look down into the depths of depravity and despair and bleed all over everyone else about how bad you have it.    However, if you are convinced that you are just as good as anyone else, no matter what your individual characteristics, then you will look out, forward and up in search of opportunity.  Government can’t give you courage and ambition; only you can, but you have to want it with all of your being.  Most would rather be victims at the expense of the rest of society because it is easier to be lazy than it is to be industrious.  But, as we have said before, what happens to a nation when there are more people in the cart than those pulling the cart?

This life in a free America promises you nothing but opportunity.  Some see the opportunity and run with it.  Others declare victim status and wait for the government, or someone else, to stroke their fevered brow and aid and abet their victimhood.  And the government is all-too-willing to steal our money to help them, no matter how much it costs.  After all, those victims might just vote for the politician that does just that.

Indeed!  FDR enumerated the platform of the Socialist’s mantra.  FDR’s attempt to illegally expand the Bill of Rights was an outright and blatant perversion of the U.S. Constitution.   Our government has spent trillions of our money on poverty and on FDR’s expanded Bill of Rights and yet poverty still exists at the same or higher level as it did at the start of the Great Society.

As we stated in a recent article:  This gnashing of teeth over health care (or Russia) overshadows a much bigger problem, an unsustainable national debt that is expected to explode to $30,000,000,000,000 (that’s trillion) by the year 2026, according to the Congressional Budget Office (CBO).  “In CBO’s baseline projections (which incorporate the assumption that current laws will generally remain the same), growth in spending—particularly for Social Security, health care, and interest payments on federal debt—outpaces growth in revenues over the coming 10 years.  The budget deficit increases modestly through 2018 but then starts to rise more sharply, reaching $1.4 trillion in 2026.  As a percentage of GDP, the deficit remains at roughly 2.9 percent through 2018, starts to rise, and reaches 4.9 percent by the end of the 10-year projection period.  The projected cumulative deficit between 2017 and 2026 is $9.4 trillion.”  And this is just an estimate that is very likely to be much worse.

Readers who think we are heartless and without compassion should re-examine their belief system and their knowledge of simple economics.  Yes, there are people in society that need society’s reasonable help.  Sadly, America has provided that help in such a grandiose manner that the nation is at the point of breaking the bank and rendering it insolvent.  The 2011 chart above graphically indicates a dramatic explosion in welfare spending since President Johnson’s Great Society.  This explosion has resulted from adding those who shouldn’t be receiving any help at all, in exchange for their votes, to those in society who truly need help, with deadly economic and fiscal consequences.

None of this takes into account the huge drain on capital by a giant welfare state.  That huge drain inhibits corporate and business formation and expansion, resulting in fewer jobs, lower per capita income and less wealth creation that pays for all those people trapped in “poor-dom.”

However, what eclipses everything we have said here is that a nation is only as strong as the strength and character of its citizens.  The nation dies if the people are weak and without honor.  If the percentage of the population grows weaker every year, as it has for several decades, then Benjamin Franklin’s prophecy comes true.  “The more public provisions are made for the poor, the less they provide for themselves, and became poorer (and weaker).”  The nation is dying ladies and gentlemen and it appears that nothing can stop it ….. except the people themselves.  Meanwhile, the poor are growing ever more poorer and the nation is going ever more deeper in unsustainable debt.

The hard truth is, the terms “equity and social justice” were not created by Democrats for altruistic or compassionate reasons; they were created to redistribute wealth and to buy votes from government-created victims, deadbeats and freeloaders for the sole and premeditated purpose to gain perpetual political power in America under the banner of Progressivism.  They have been hugely successful, to the detriment of America and freedom.