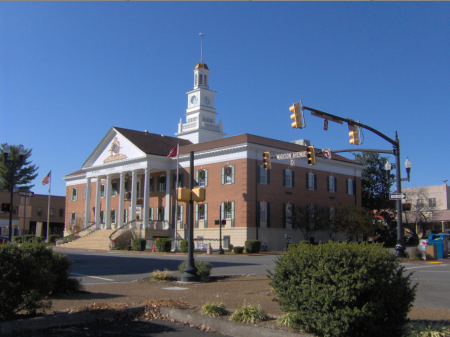 (Jul. 21, 2017) — On Thursday, The Post & Email reported that McMinn County, TN resident Walter Francis Fitzpatrick, III on Tuesday took a sizable packet of documentation to the county “Justice Center” with the intention of addressing the grand jury about local public corruption which has affected not only him, but all Tennesseans, directly or indirectly.

In his complaint, Fitzpatrick accused McMinn County Sheriff Joe Guy and two McMinn County grand jury foremen, one current and one former, of criminal activity and demanded their respective presentments and arrests.

In states which utilize the grand jury system, only that body can issue criminal presentments after a review of the evidence as set forth in the Fifth Amendment.

In a “General Statement of Offenses” included in the packet, Fitzpatrick wrote:

On a number of previous occasions beginning in August 2012 through March 2014, Fitzpatrick had requested a hearing before the grand jury on the same issue but was denied access by then-grand jury foreman Jeffrey L. Cunningham.

In late 2011, Cunningham was personally selected to serve as foreman by then-Criminal Court Judge Amy Armstrong Reedy, reportedly by an evening telephone call placed by Reedy to Cunningham.

In December 2011, Fitzpatrick reported having observed Reedy hand-picking in open court all of the grand jury members for the new term to commence the following month.

The personal selection of the foreman by criminal court judges from outside of the empaneled jury pool has been ongoing in Tennessee for more than a century, as Fitzpatrick’s extensive research, published earlier this month, demonstrates.

A licensed attorney, Cunningham is president and CEO of the Athens Federal Community Bank.  Curiously, his successor to the foremanship of the grand jury, Larry Wallace, is a member of the Board of Directors at the same institution and a retired 40+-year law-enforcement professional.

In early March of that year, unbeknownst to Fitzpatrick, Cunningham resigned his position as grand jury foreman.  On March 18, Fitzpatrick again sought a hearing with the grand jury, after which he was arrested while awaiting a decision by two McMinn County sheriff’s deputies on two grand jury indictments.

By that time, Wallace was serving as foreman, but Reedy replaced him with Thomas Balkom with the apparent purpose of indicting Fitzpatrick as he sat on a bench reading a book outside of the grand jury room.

Despite a tardy and vacuous Bill of Particulars produced by the prosecution as well as the absence of a signed police report or criminal complaint by the alleged accuser, Cunningham, Fitzpatrick’s two-day trial resulted in convictions on the two felonies of aggravated perjury and extortion.

On August 19, 2014, Fitzpatrick was sentenced to three years in state prison by Senior Judge Jon Kerry Blackwood, who has since entered full retirement.  As with a myriad of other Tennessee criminal court judges, Blackwood has appointed dozens of long-serving grand jury foremen from outside of the jury pool without regard for state law.

Fitzpatrick served more than 26 months in state prison. On October 25, 2016, he was released following three surgeries on his feet.  Medical personnel had gone so far as to consider amputation due to the extent of infection which had set in while Fitzpatrick was incarcerated. Fitzpatrick suffered other medical and dental ailments while confined.

Within his 400-odd-page document packet was an instruction sheet intended for court personnel on Tuesday requesting Wallace’s recusal and that any grand jury members reviewing his petition not be acquainted with him.

When Fitzpatrick initially faced Wallace on Tuesday, he demanded verbally that Wallace recuse himself for conflict of interest since he was named in Fitzpatrick’s current complaint.  After a consultation with Criminal Court Judge Sandra Donaghy and Atty. Joseph Hoffer of the Tenth Judicial District public defender’s office, Wallace agreed to recuse, and Donaghy appointed Mr. Terry Bowers as grand jury foreman pro tempore.

According to state law, Fitzpatrick should have been permitted the opportunity to choose two other members of the grand jury to form a three-person panel to provide an initial review of his complaint.  “Donaghy, Hoffer and Bowers picked the two others. I did not,” Fitzpatrick said.  Two women, one of whom was identified only by first name and the other not at all, became Bowers’s co-panelists at Donaghy’s behest.  “Neither woman read a single word of what I presented in my presence. Neither woman asked a single question,” Fitzpatrick recalled.

“Bowers and Hoffer grilled me on non-relevant concerns, then stated repeatedly that I’d not advanced a single criminal act under a T.C.A. statute that could be presented or indicted in McMinn County, meaning it was their opinion no case could be advanced to trial.  The three rigged Tuesday’s panel!!!”

Fitzpatrick noted after returning home that day that his appearance at the courthouse was unexpected, in contrast to the events of March 18, 2014.   Fitzpatrick termed that day, March 18, 2014, “an ambush” planned by Reedy, Bebb, and Cunningham.

On Friday, Fitzpatrick wrote to Hoffer in an email that the instructions he provided on Tuesday “were ignored almost completely.” However, he acknowledged that “Mr. Wallace understood them completely and removed himself from the McMinn County grand jury as its foreman regarding my criminal allegations.”

Later in the email, Fitzpatrick wrote, “One remedy available here is for my application to be judicially approved, by a judge other than Sandra N.C. Donaghy, and allow for my presentation before the full McMinn County grand jury. A grand jury formed in accordance with my 18 July 2017 instructions. Mr. Bowers, Miss Brenda and Lady #3 are all disqualified from sitting on the full grand jury once constitutionally assembled.”

He added, “Another is to call into existence another three person ‘panel,’ disinfected, in compliance with my instructions to hear again what I have to say as I make application.”

Fitzpatrick has filed complaints against Wallace and Cunningham with federal authorities, of which he has informed Hoffer.

[Editor’s Note:  This is the second report in this series.  Please look for Part 3 over the weekend.]