“BEYOND MY ABILITY TO DESCRIBE” 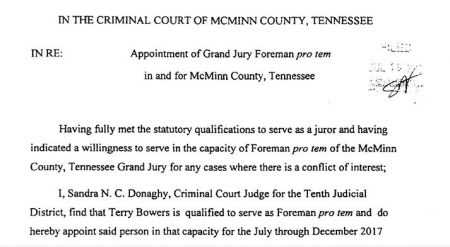 (Jul. 20, 2017) — On Tuesday, LCDR Walter Francis Fitzpatrick, III (Ret) went to the McMinn County, TN Justice Center in Athens where the county grand jury meets monthly to review any petitions presented by citizens and prosecutors alleging crimes and/or corruption within the county.

Rhonda Cooley is the elected Circuit Court clerk, and Sherry Anderson is her assistant.  McMinn County is one of four counties in Tennessee’s Tenth Judicial District.

The last time Fitzpatrick took a petition to the court to request a grand jury hearing, he was arrested as he awaited a decision on a bench outside of the grand jury room, reading a book.  On that day, March 18, 2014, Fitzpatrick was charged with harassment, stalking, extortion and aggravated perjury.

On June 25, 2014, he was convicted after a two-day trial of the felonies of extortion and aggravated perjury and sentenced that August by Senior Judge Jon Kerry Blackwood to three years in state prison.  During the trial, the person who had acted as grand jury foreman and blocked Fitzpatrick from addressing the grand jury, Jeffrey L. Cunningham, admitted that he never filed a criminal complaint against Fitzpatrick and that Fitzpatrick “seemed to believe” the claims made in his petitions.

On October 25, 2016, Fitzpatrick was released from West Tennessee State Prison (WTSP) with a one-way bus ticket to Athens and 50 pounds lighter than when he had entered, with a bandage on his left foot from recent surgery to save it.  He later revealed that during his time in prison, he developed septicemia from an infection in the foot which nearly proved fatal.

In 2009, Fitzpatrick inadvertently discovered that Tennessee’s criminal court judges handpick the grand jury foreman, placing them in a position of long-term “employment” from which some have even been declared to have eventually “retired.”

In Monroe County, as Fitzpatrick discovered, Gary Pettway served 28 years without an appointing order or evidence that he possessed the qualifications required of all jurors.  Pettway is quoted as having said that he “worked for the state” at the time.

Further, citizens summoned for jury service who have served on a jury within the past 24 months are ineligible to serve.  State law requires that juror selection be conducted via computer without human interference.

Fitzpatrick and others have documented instances of jurors commenting that they served on a jury just a few months prior to their current service or that they served consecutive terms, as in the case of Angela Davis in 2010 in Monroe County, also part of the Tenth Judicial District.

On Tuesday, July 18, Fitzpatrick presented to a three-person McMinn County grand jury panel a written packet consisting of over 400 pages and one DVD submission documenting that the McMinn County Sheriff’s Department labeled him a potentially-dangerous “sovereign citizen,” a government pejorative loosely applied to large numbers of people during the Obama years along with the term “domestic terrorist.”

Fitzpatrick noted additional offenses on the part of McMinn County and the Tenth Judicial District.

The training program named another Navy veteran, Darren Wesley Huff, as a “sovereign citizen.” In 2011, Huff was prosecuted and later convicted by the federal government for transporting firearms across state lines with the intent to use them in a “civil disorder.”

Fitzpatrick has illustrated that FBI Special Agent Mark Van Balen was not truthful in his probable cause affidavit as to Huff’s location on April 20, 2010 in Madisonville, Monroe County.  Huff, along with virtually every other person who traveled to the hearing for Fitzpatrick that day, was denied entry to the courthouse, after which Huff had breakfast with friends and acquaintances at a restaurant across the street.

Prior to exiting his vehicle, Huff had locked his firearms in the toolbox attached to his truck and was unarmed at all times while in Madisonville as described in a sworn affidavit by former Marine William R. Looman.

Huff was convicted of a firearms violation and sentenced to four years in federal prison, where the label of “sovereign citizen” followed him.

In April 2012, the “sovereign citizen” training program for McMinn County Sheriff’s Department deputies was leaked to The Post & Email and depicts photos of Huff and Fitzpatrick as criminals.

Fitzpatrick arrived at the courthouse on Tuesday at 8:30 a.m. with his large stack of documents to present to the grand jury if given the opportunity.

The present grand jury foreman, former career law-enforcement officer Larry Wallace, is named as one of the perpetrators of criminal activity in Fitzpatrick’s complaint in addition to Cunningham and McMinn County Sheriff Joe Guy.

Both Wallace and Cunningham are officers at the Athens Federal Community Bank, and both were appointed grand jury foreman by former Criminal Court Judge Amy Armstrong Reedy, who Fitzpatrick has observed hand-picking trial jurors as well as grand jurors.

“I made exactly the same accusations on Tuesday as I made in 2014, 2013 and 2012,” Fitzpatrick said.  “If the state wants to pull this trigger again, they can, but they’re going to have accuse me of the same thing.  This time, they’re going to have to explain where I’m lying now, and they won’t be able to do that.”

“When he came out the second time, he announced that he was recusing himself,” Fitzpatrick said.

Fitzpatrick was then permitted to meet with a grand jury foreman pro tempore, who Criminal Court Judge Sandra Donaghy appointed after Fitzpatrick asked for Wallace’s recusal given that he was accused of wrongdoing in Fitzpatrick’s current petition. In accordance with Tennessee law, two other grand jurors joined the foreman to provide an initial screening of Fitzpatrick’s complaint.  During that exchange, Bowers asked Fitzpatrick if he were ever court-martialed, to which he responded in the affirmative, a matter about which The Post & Email has reported extensively since 2010 and involves the forgery of Fitzpatrick’s name to a false “confession” document by his defense attorney in 1990.

Fitzpatrick said that Bowers then asked if he were honorably-discharged, to which Fitzpatrick responded by placing his military identification card on the table in the meeting room.  “I was honorably discharged twice,” Fitzpatrick told Bowers, “once as an enlisted man and the second time as an officer.”

Fitzpatrick has drawn a military pension since 1994, when he retired.

“One of the things that came out of Tuesday’s hearing was the appointing order that Sandra Donaghy signed out for Terry Bowers,” Fitzpatrick said.  “The significance of that document is beyond my ability to describe.  What happened on Tuesday hasn’t happened in McMinn County before because Cunningham blocked me.”

Fitzpatrick noted, however, that at of the time he exited the “grand jury suite” in the justice center, none of the three members on the panel  had read any part of the large evidence package on the table before them.

Fitzpatrick made that known to the three-member panel.  “I told Tuesday’s gathering that what was happening right before them, my presence in the room, Mr. Wallace’s absence from the room was a demonstration of the way the process is laid out in statute, which was occurring for me, the first time in McMinn County, in the very moment I’m speaking to them,” he recounted.  “It is the process Cunningham completely disrupted in 2014.”

He further told us:

I insisted to the group on Tuesday, standing at the door about to exit, that they had an important duty to perform to approve my request to appear before the full grand jury.

I told them our grand juries have been taken from us and we need to get them back.

Despite his meeting with the three-member panel, Fitzpatrick said he suspects that county officials are planning to arrest him on a concocted charge.

[Editor’s Note:  This story will be amplified in several near-future installments.]