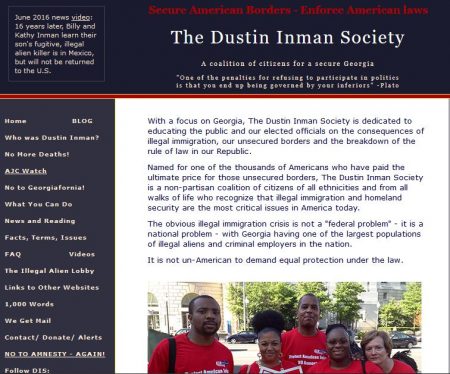 The organization states of its purpose:

Our unequivocal mission is to end illegal immigration, illegal employment, the illegal administration and granting of Public Benefits and services through the equal application of existing laws. Additionally, we are proud to successfully advocate for and offer expert, experienced advice on crafting state and local legislation aimed at impeding illegal immigration.

The group maintains an active Facebook page with current events, opinions and videos on the subject of illegal-alien immigration and its effects on legal Americans.

Just before Fathers’ Day, The Post & Email interviewed the father of the organization’s namesake, published in a two-part interview here and here, respectively.

Billy and Kathy Inman continue to struggle daily 17 years and one month after an illegal-alien driver crashed into the rear of their vehicle at 62 mph while the Inmans were observing a stop sign.  The impact killed 16-year-old Dustin and the family dog and permanently injured Kathy, who is relegated to a wheelchair and experiences seizures and other medical complications.

Dustin was the couple’s only child.  During our interview, Billy told The Post & Email that his dreams of spending time hunting and fishing with grandchildren after seeing his son grow up have been forever stolen from him along with his wife’s health and independence.

Now in their early 50s, Billy is Kathy’s primary caretaker while also working part-time as a delivery driver.

The perpetrator of the crime, Gonzalo Harrell-Gonzalez, fled from authorities and is believed to be in Mexico, with the U.S. Justice Department claiming that it cannot extradite him to the United States to stand trial.

Originally from Michigan, King spent time in Montgomery, AL from the time he was a child due to his parents’ divorce.  He graduated from a Detroit high school and joined the U.S. Marines at the age of 17.  “I had left home and was too young to get a job, so my friend and I joined the Marine Corps in 1969 for two years,” he told us.

King eventually went into the field of insurance but forfeited his business to dedicate his time to immigration-enforcement advocacy.  “I had an insurance agency; I had money in the bank.  My brother-in-law gave me a computer in the year 2000.  I was one of those people who swore he was never going to touch a computer,” he said of his former career and life.

Of his entry into the immigration debate, King told us:

I had heard and read a lot about Somalis here in Atlanta who had come here and were tuned in to the radio actively looking for a state that had better welfare benefits.  It was a radio host, Neal Boortz, who put this in front of me; he was in Atlanta at that time.

The fact that there were immigrants or refugees coming here and then scouting out the highest-paid welfare benefits, which turned out to be in Minnesota, got my attention.  At the same time, we had a family of Mexicans living across the street from us who had moved about 18-20 people into a single-family home.  I started studying immigration then, and when 9-11 happened, that was really what got me started actively.

So in 2003, with very little consideration and a very patient wife, I just stopped working at my own insurance business and started spending our own money trying to educate people on what I had learned.  I started doing public speaking on radio and TV and writing newspaper columns.  Now, I’m 65 years old and in debt, and we’ll never get out of debt.

“Did you know Dustin Inman?” The Post & Email asked.

No. I had incorporated something called “The American Resistance.”  This is kind-of humorous now.  Growing up in Detroit, nearly all of the dads on the street had something to do with World War II.  Everybody’s garage had surplus combat gear. I grew up with a military entrenching tool as a shovel.

I knew a couple of people who had been in Europe and had dealings with the French Resistance during the war. I was attempting to turn that phrase into “The American Resistance” to try to make people understand that we are fighting our own government because our government consists of people who are not securing our borders and not enforcing our laws.  I was told at the time that “The American Resistance” was so negative and militant-sounding that “You will never get anywhere,” and it turned out to be right.

I met the Inmans at a rally that I had organized and learned their story.  Like you, I nearly started crying the first time I met them.  I changed the name of the effort at their request and with their blessing to “The Dustin Inman Society.”

Going back to the other, it was several years later that I heard that Sean Hannity was using the phrase, “the American resistance to the left.”  Now it is the far-crazy left using the term, “We are the resistance” to the Trump administration, and all of a sudden it doesn’t seem that this is too negative a concept to be used nationwide for whatever political purpose you have.

The Dustin Inman Society has been a 501(c)4 non-profit since the year 2005.  I originally applied for 501(c)3 status and was told on the phone by an IRS agent who approves such applications that he could not give me 501(c)3 status because I was an “advocate.”  And I said, “I’m advocating that we obey our laws.”  He said, “It doesn’t matter; you will not get it.”

If you look around, the National Council of La Raza is a 501(c)3; MALDEF is a 501(c)3.  A lot of advocacy groups who advocate that we not enforce our immigration laws were somehow able to get 501(c)3 status where the donations to these organizations are tax-deductible, which is key in fundraising.  Donations to The Dustin Inman Society are not tax-deductible and therefore, they are nearly non-existent.

[Editor’s Note:  The National Council of La Raza has very recently changed its name to “Unidos US.”]

“Do you think you have been discriminated against?”

I think anybody who stands up for secure borders and is pro-enforcement is discriminated against in this country.  The biggest enemy here that I have, the most well-funded enemy in Georgia, is an organization called the Georgia Association of Latino Elected Officials (GALEO).  It is an innocuous name that has nothing to do with they actually do:  they lobby full-time against “official English” and they lobby against enforcement of our immigration laws.  While they do it, they use a race-baiting scare tactic against anyone who opposes them.  They are funded with tax-deductible donations by such entities as Coca-Cola, Georgia Power, State Farm Insurance, and Southwest Airlines, and they have on their membership roll some Republican state legislators here in Georgia.

Something I’m very proud of is that two years ago, a Board member of GALEO was nominated by President Obama at the time to become a federal judge for the Northern District of Georgia.  He was going to take someone from the Board of GALEO and put him in a lifetime position in a federal court.  That was not something I could sit still for.  That was a six-month project, and I’m grateful for the help that we got from state legislators who had seen GALEO in action at the state capitol and county sheriffs, all of whom helped me defeat the nomination in the Senate Judiciary Committee in Washington.  We were very proud, along with the help of U.S. Senator David Perdue from here in Georgia, who is on the Judiciary Committee and listened to us and checked our research, to stop a member of the far-left, anti-enforcement, open-borders organization from becoming a federal judge.

“That shows that citizen involvement can make a difference.”

Yes, it does.  I’ve been deeply involved in creating state legislation aimed at immigration enforcement since 2006.  At one time I was a registered lobbyist.  Now the job is to go back to Republican-controlled Georgia whose elected officials want to do anything except enforce the laws that we have already passed aimed at immigration enforcement and protecting jobs, benefits and services from the crime of illegal immigration.

“In the course of writing my previous article, I noted that Georgia passed HB 87 in 2011.  How do you think the law is working?”

I’m very grateful to State Rep. Matt Ramsey for his courage.  I worked with him on that 23-page bill.  The sad part is that when the Georgia Chamber of Commerce, the Metro Atlanta Chamber of Commerce, and the Big Agriculture lobbyists realized they could not beat us – they were working in concert with GALEO with the far left – they diluted the enforcement provisions of the bill.  Quite honestly, HB 87, the highlight of which was an E-Verify requirement by the employers here in Georgia, is treated as a joke.

I now have multiple complaints out about violations.  As far as I can tell, I am the only person in Georgia who is even looking to see if there is any compliance.  That includes every single one of the state legislators except about two who really have an interest in whether or not the internationally-publicized state legislation from 2011 is obeyed.

It’s not.  The governor knows that it’s not.  We live in a state where the governor is allowing illegal aliens to have a driver’s license. For all intents and purposes, the government of Republican-controlled Georgia is pretty-much anti-enforcement, and the Georgia media is very willing to be complicit in not telling the story to readers.

Please watch for the second half of our interview with D.A. King, which will amplify on how he perceives that Gov. Nathan Deal is deceiving the public as to whether or not illegal aliens are granted drivers’ licenses in the state.

What is the State of Illegal Immigration in Georgia? added on Saturday, July 15, 2017