PASSED OUT FROM LOW BLOOD PRESSURE, HOSPITALIZED FOR TWO DAYS 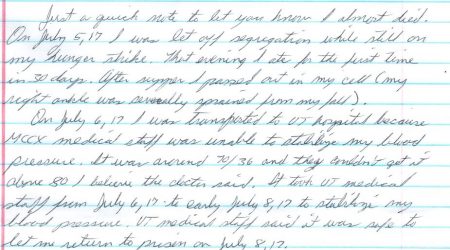 Harmer refused to eat in protest of the treatment he said he received after his arrival at the Morgan County Correctional Complex (MCCX), a situation about which The Post & Email notified TDOC spokeswoman Neysa Taylor on June 19 with a request that she check into Harmer’s well-being.

We received no assurance that he was receiving medical monitoring as he continued to decline the items on his food trays and grew increasingly weaker according to his letters written through the month of June and into early July.  Two voice messages left with MCCX administration alerting them to Harmer’s hunger strike received no response.

His recent letter confirmed a report we received from a source late last week stating that Harmer was in medical distress and in need of immediate attention.  While Taylor on Friday night told The Post & Email that that report was “incorrect,” it was accurate as of two days before it reached the source while it moved through the USPS mail stream.

Harmer explained that after his 30-day relegation to solitary confinement on June 5 which he said was undeserved, he was placed in a cell with another inmate on July 5 and decided to have supper.  “That evening I ate for the first time in 30 days,” he wrote in his first paragraph.  “After supper I passed out in my cell (my right ankle was severally [sic] sprained from my fall).”

He further said that the next morning, he was taken to the University of Tennessee Medical Center “because MCCX medical staff was unable to stabilize my blood pressure. It was around 70/36 and they couldn’t get it above 80 I believe the doctor said,” he wrote. “It took UT medical staff from July 6, 17 to early July 8, 17 to stabilize my blood pressure.”

Harmer was returned to MCCX following that stabilization.  He reported feeling weak and tired from the ordeal.

With his letter, Harmer enclosed the menu he was provided while hospitalized.  “The food was really good!” he commented.

Later in his correspondence, Harmer indicated, “I’ve no intention of going on a hunger strike again.  That was brutal.”

Whether or not Harmer will experience medical complications from his protest or further retaliation from MCCX staff remain to be seen.