(Jul. 5, 2017) — The journal entries which follow were sent by Tennessee inmate Grenda Harmer, #88710, who has been on a hunger strike for a month to protest harsh treatment he said he received upon his arrival at the Morgan County Correctional Complex (MCCX) in Wartburg on June 3.

Prison staff have reportedly made some partial concessions in response to Harmer’s five demands, but he has continued to refuse solid food, surviving on water and commercially-sealed milk.

One of the concessions was returning some of his personal possessions which were confiscated by intake staff upon his arrival at the institution.  In a recent letter Harmer said that the items which have been returned were the most “important” to him.

Harmer’s other demands include his relocation back to TCIX, where he reportedly worked in the woodworking shop; for the Tennessee Department of Correction (TDOC) to cease its “abuse” of him; the return of his writing materials and other missing items; to be released from solitary confinement; and to be celled with an inmate who is not a gang member.

Harmer has reported that there has been no medical monitoring of his hunger protest, although correction officers are aware that he has refused all food since after lunch on June 5.  In a letter received on Monday, Harmer wrote that “They care less if offenders live or die.”

As The Post & Email has reported, hunger strikes lasting more than 30 days often involve medical complications.  Harmer has at least three medical conditions which have been unmonitored for nearly a year, after he was moved from TCIX to TTCC last July.

Moreover, his medications for those conditions have been stopped and restarted at least three times since late February.  He is now unable to take one of the medications since it now has the effect of dehydration, as reported below.

Harmer has sent many grievances to TDOC Commissioner Tony Parker which remain unanswered to the best of our knowledge.  The commissioner’s office has been unresponsive to this writer, deferring all media requests to Communications Director Neysa Taylor.

On June 21, Taylor claimed The Post & Email issued a “threat” against her when it sent a follow-up request for a health and welfare check on Harmer after she failed to respond meaningfully two days prior indicating that we planned to publish an article on June 22 with or without a response.  In the world of journalism, that is called a “deadline,” of which Taylor should be aware since she claims she was a television broadcast journalist prior to her appointment as TDOC spokesman.

It appears that Harmer has been retaliated against for corresponding with this publication and others as well as government representatives and other parties on the “outside,” as initially his pen was broken and all writing paper confiscated.  He continues to write letters on blank TDOC Inmate Grievance forms.

The journal notes received on Monday begin on June 19 and end on June 28, the latter of which refers to a “blackout” he described experiencing in the middle of the night in his letter received at the same time, caused by dehydration.

At the top of page 2, Harmer related in an entry for June 24 that “At supper when food was passed out and I refused my tray, the last officer who walked by said: “You want a hamburger Harmer?  We’ll stop by McDonalds.” [sic] 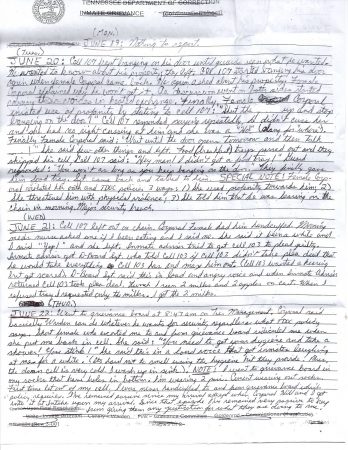 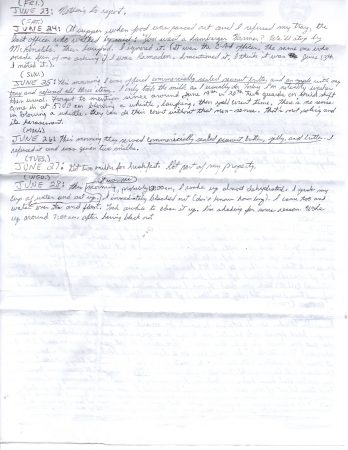 In additional correspondence received on Monday to be published later this week, Harmer acknowledged that he may not survive his protest, which today passed the 30-day mark.