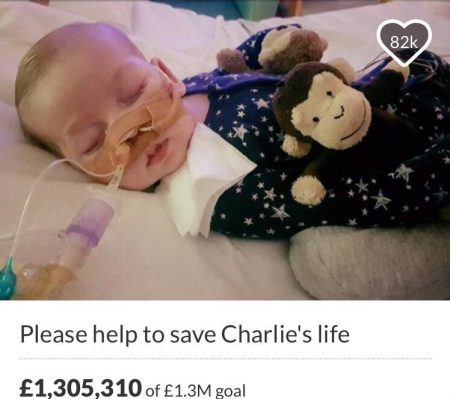 (Jul. 4, 2017) — The UK Independent is reporting late on Tuesday that an unnamed U.S. hospital and physician have offered to extend what would be experimental treatment to Charlie Gard, the 11-month-old British child whose story has jettisoned around the world after a UK hospital and a series of court decisions have limited his parents’ options for what is now considered an end-of-life decision.

The Great Ormond Street Hospital (GOSH) had planned to turn off Charlie’s life-support apparatus on Friday but postponed it, reportedly extending the time his parents will have with him until this coming Friday, July 7.

The hospital will not allow the parents to take their baby home or transport him to the U.S. for the experimental treatment they seek to save their son’s life if possible.

Last week the Vatican had at first appeared to align its view of the tragic situation with that of the hospital and the UK courts when it released a statement contending that decisions must be based on “what advances the health of the patient.”  GOSH has taken the position that further treatment will not benefit the baby.

On Monday, however, the Pope appeared to reverse the Vatican’s earlier statement when a new statement said, in regard to the infant’s parents, that “He prays for them, wishing that their desire to accompany and care for their own child to the end will be respected.”

Also on Monday, U.S. President Donald Trump tweeted that “If we can help little #CharlieGard, as per our friends in the U.K. and the Pope, we would be delighted to do so.”

GOSH has stated that the child should be allowed to “die with dignity” as a result of the disease from which he suffers, mitochondrial depletion syndrome.  The very rare genetic disorder can occur in several forms and can cause muscle weakness, injury to the brain and breathing difficulties.

The parents have raised more than $1 million in the hope that they can take their child to the U.S. for an experimental treatment.  Although a disease reportedly affecting only 16 children in the world currently, Charlie’s mother, Connie Yates, tweeted a photo of a child who appears to have obtained treatment and improved considerably. 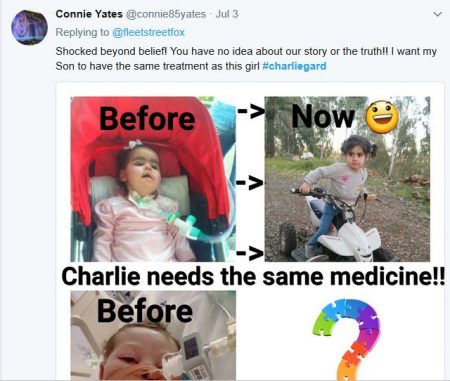 On the GoFundMe page for Charlie, his parents reported:

After endlessly researching and speaking to Dr’s all over the world we found hope in a medication that may help him and a Dr in America has accepted him in his hospital. It hasn’t been tried on anyone with his gene before (he’s only number 16 in the world ever reported) but it’s had success with another mitochondrial depletion syndrome called TK2 which is similar – it’s helping children to get their strength back and live longer! We strongly feel as his parents that Charlie should get a chance to try these medications. He literally has nothing to lose but potentially a healthier, happier life to gain.

One of the comments reads:

This story is near and dear to me. Our daughter has a Mitochondrial Depletion Syndrome, gene unknown. She wasn’t as sick as this sweet angel but to hear Drs. make statements about his prognosis is insane. IT is very common in all mitochondrial diseases to have long periods of instability and then they can stabilize. Infancy, toddler and the teen years are the hardest as they use so much energy growing. Our daughter got worse in her teen years but we found ways to save her energy and keep her as healthy and possible and she is now 21. Every human deserves the chance to live. No Dr should be allowed to decide. Hope he makes it to the states, it is up to Charlie not the Drs. For what it is worth, our daughter struggled with energy and illness more then pain.

CNN reported late Tuesday that a Vatican hospital has offered to admit Charlie for treatment, although the hospital in London has reportedly said that “for legal reasons, transferring Charlie to their care would be impossible.”

Developments in the story are appearing on Twitter late on Tuesday night.

The UK has employed a socialized medicine model since 1948 with the creation of its National Health Service (NHS).