“DON’T GIVE IN; IT’S WORTH THE FIGHT”

The allegation of extortion was made by Cook’s twin brother, Andrew Cook, who lives and works in Costa Rica.  At issue was the disappearance of a number of computer circuit boards belonging to Andrew’s business.

Exactly two years ago on Tuesday, Roy Cook told The Post & Email that he was the first person on record in the county to have been prosecuted for extortion.  A younger brother, Tom, was also initially charged with the same crime.

District Attorney General (DAG) Russell Johnson chose to prosecute case, although Roy Cook’s understanding is that Johnson’s deputy, Bill Reedy, and the investigator, Jeff Vittatoe, told him the case was unsound from the beginning.  “I think from the emails even Edwards was telling Johnson that for the last three months,” Roy Cook told  The Post & Email, referring to emails on which he was copied as the case came to the end of its fourth year and entered its fifth.

It was Deputy DAG Robert Edwards who informed Cook in a face-to-face meeting almost two weeks ago that the decision had been made to drop the charge against him.  However, Wicks needed to approve the motion issued by the prosecutor’s office to make it official, which he did on Monday in a hearing which Roy Cook said took “about five minutes.”

“Edwards mentioned in the meeting all the things that bothered him about the case….Andrew only supplying calls where he called me, not telling Vittatoe he found the circuit boards until he was confronted by Vittatoe with it seven weeks later,  Tom’s Judgement…” Roy Cook told The Post & Email.

Solidifying the case’s unusual beginnings, neither Edwards, Johnson nor Vittatoe, despite having served a search warrant on Roy Cook’s home, supplied the Roane County grand jury with the alleged evidence against the defendants. Rather, the accuser, Andrew Cook, addressed the grand jury himself.

Tennessee law allows any citizen of the state to testify to a grand jury, although he or she must sign a statement indicating that a prosecution for perjury could occur if any testimony were to be found later to be knowingly false.

However, when Roy Cook’s home was searched on April 24, 2013, he perceived that he was considered guilty, at least by Vittatoe, long before an indictment was ever issued.  “The detective seized my computers, took my cell phone – a $15 Walmart special, which is all I use – and he said, ‘I’ve got enough evidence to convict you.  I’ve listened to the phone recordings, and when we get into your computers, I’ll have all the evidence I really need to convict you;  you might just as well want to confess,’” Roy Cook told us Vittatoe said after he served and executed the search warrant.

The grand jury issued its indictment against Roy Cook in October 2013.  One month later, Vittatoe relocated to Montana, where he now works for the state.

Tom Cook prematurely passed away in June 2014, although the charge against him was dropped the same day Roy Cook was indicted.

Maintaining his innocence, Roy Cook spent the next four years gathering telephone records, emails and other evidence to defend himself against the allegation that he had demanded $30,000 from Andrew for the return of the circuit boards.

Over the life of the case, which entered its fifth year in late April, Roy Cook was assigned five different attorneys at the county’s expense, none of whom was willing to pursue his client’s claim of prosecutorial misconduct against Johnson or Edwards.

Last summer, Roy Cook filed complaints with the Board of Professional Responsibility (BOPR) against Edwards and two of his attorneys, public defender Walter Johnson and private practitioner Joshua Hedrick.

At a hearing in April 2016, when Wicks questioned Roy Cook as to why each of his attorneys had chosen to withdraw, Cook responded that he did not instigate their respective decisions.  “I would like a competent attorney who is not corrupt,” Roy Cook told Wicks at the time.

Roy Cook arguably did more work on his defense than any of his attorneys.  “Doing it my way, I got it dismissed; doing it their way, we could have had a trial, and as innocent as I am, I could have been found guilty by a jury,” he told us on Monday afternoon.

In addition to an incomplete and unsigned computer forensics report and the disappearance of the person who transported his equipment, Lt. Dan Schneider, Roy Cook often wondered why prosecutors chose to pursue the case against him after his brother was exonerated and the circuit boards were located in Andrew’s apartment.

At several points in the case, Roy Cook’s attorneys at the time suggested that he accept a plea deal entailing a year of probation and no jail time.  Maintaining his innocence, he refused each time.

“He wouldn’t subpoena documents for me, but he subpoenaed a transcript for himself after he left the case,” Roy Cook added.

After the brief hearing on Monday in which Wicks dismissed the case without prejudice and charged all costs to the State of Tennessee, Roy Cook told The Post & Email that the time, energy and research he expended to defend his innocence were worth the price and that he is willing to help others accused of a crime to navigate the process.  “Give out my phone number,” he told us in order to make himself available to others who believe they have been wrongly prosecuted. 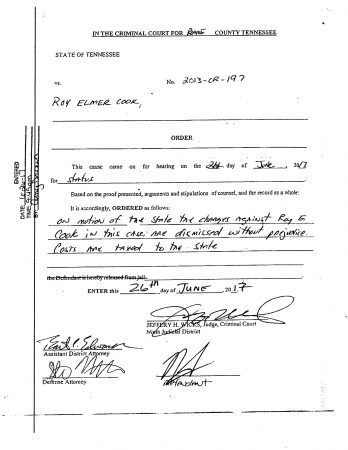 “Try to stay out of jail.  Don’t help them.  Delaying your case will not hurt you; the longer my case went on, the more I found out.