“IT’S BEEN A LONG JOURNEY” 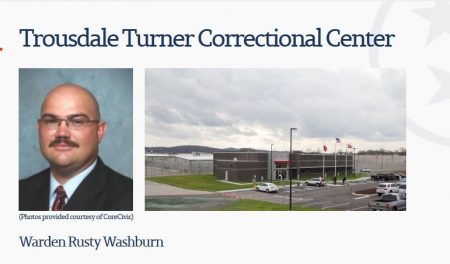 (Jun. 19, 2017) — As The Post & Email has reported since Friday, Nashville-based television station WSMV will be launching a four-part series at 6:00 PM CDT beginning on Monday and running through Thursday on the subject of corruption, substandard care, short-staffing, deaths and injuries within two of Tennessee’s privately-run penal institutions.

The broadcast will repeat at 10:00 PM CDT each evening.

On May 23, longtime WSMV news anchor Demetria Kalodimos contacted us to advise that the series was being scheduled for sometime in June. Prior to that, we had been in touch with both Kalodimos and I-Team investigative reporter Jeremy Finley on a number of issues within Tennessee’s prisons which have been reported to us in dozens of inmate letters and relatives’ emails and phone calls over more than two years.

Prisons which will reportedly be the focus of WSMV’s reportage are the Trousdale Turner Correctional Center (TTCC) in Hartsville and South Central Correctional Facility (SCCF) in Clifton.

WSMV has pursued the matter of prison contraband as evidenced by inmates posting photos and videos on Facebook as well as smoking what appears to be marijuana.  Finley has also reported about a 2015 overtime rules change which adversely affected correction officers’ ability to perform their jobs safely, resulting in a mass exodus of employees.

On Saturday, The Post & Email spoke with two “insider” sources, one of whom stated that CoreCivic has been attempting to waylay the upcoming television series.  “CoreCivic is trying to stop it, but Channel 4 is saying, ‘No, you can’t stop it,’ one source told us, adding, “People are enduring a lot of stress for going through with it.  It’s been a long journey.”

WSMV has been airing a television clip to promote the series over the last several days.  “The inmates are watching the promos and are excited and thrilled to see that the truth is getting out.  They’re watching this, and they ‘re encouraged,” the source told us.

Tennesseans’ taxpayer dollars support the prison system. In a significant number of inmate letters received by this publication over the last 13 months, many expressed concern that their fellow citizens’ hard-earned tax dollars are funding a system which permits and even promotes dangerous conditions within.

Another insider told us of TTCC:

One thing that I noticed that is certainly a misrepresentation of what they’re doing and definitely a misappropriation of tax dollars is that they started enrolling inmates in education because there was a big complaint that they had not been given anything to do.  For inmates without a GED or high school diploma, they’re enrolling them in classes supposedly to get them ready to take the GED test so they can get their diploma.  However, there is no curriculum being taught whatsoever.  They’re sending them to a room which is supposed to be the classroom, but they’re just sitting there, doing crossword puzzles…there is nothing being done there at all.

They’re doing this so that everybody from the outside will say, “Well, we’ve got ’em enrolled in school,” but there’s nothing being done.

Another is is that there was a man about 25 or 26 years old who died several weeks ago.  From the time they called “Code” to the time we saw a stretcher actually going into the pod and being pulled out was at least 20 minutes.  That’s insanity.

“Do you know the cause of death?” The Post & Email asked.

We were told it was an overdose.  There was rumor that he was a diabetic and that that was the cause, but the company answer is overdose.

The source also said that reported short-staffing precipitated lockdown periods encompassing approximately six months within a calendar year.  “If there was an actual emergency, I can understand,” the source said.  “If there are ambulances showing up because of an overdose, I can understand; everyone goes in the cell; that’s normal.  I believe TDOC policy is, even when you’re locked down, you get a shower at least once every three days, but during those times it was well over a week.”

CoreCivic operates state prisons in the West, Southwest and South.  Its contracts to operate federal prison facilities were placed on hold by the previous White House last August. However, the Trump administration has reversed that course, causing CoreCivic’s stocks to soar.

In 2012, a correction officer was killed in a prison riot at a CoreCivic facility in Mississippi, and complaints have arisen alleging unsafe conditions in Idaho.

In March, a federal case brought by two female visitors to SCCF accusing CoreCivic of violating their privacy rights was resolved in a “confidential settlement.”