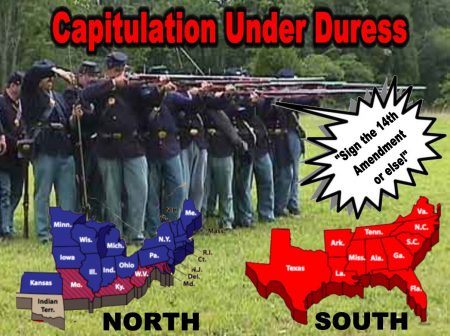 (Jun. 18, 2017) — Every now and then we pick up bits and pieces of reliable information from individuals that respond to our articles. Such was the case when one of our readers gave us an “education” on how the 14th Amendment was passed, as described in a Utah State Supreme Court Case filed in March 1968, almost exactly 100 years after the passage of the Amendment. At this point, we must stipulate that we believe the description contained in this case is accurate and true to the best of the Supreme Court judge’s knowledge of history. Nevertheless, it cannot be ignored that, in war, “to the victor goes the spoils.”

Understand that we are not making or taking a moral position in what transpired. Nor are we taking sides in the conflict. We are only describing the events that led up to the passage of the 14th Amendment, to demonstrate to what lengths government will go to get what they want.

The animosity between the inhabitants of the north and south did not soften after the civil war ended. In fact, they still simmer to this day, especially with the current push to remove Southern civil war icons, statues and monuments. But the undercurrent of animosity that exists today was nothing compared to the anger that existed during the passage of the 14th Amendment in April of 1868 and the negative impact the Amendment had on states’ rights and later, illegal immigration. The battlefield went silent, but not in the hearts and minds of the now disarmed combatants. Yes, amnesty was granted to both sides and the 11 Southern states assumed their lawful position in the now un-dissolvable United States. But there was a catch that we will describe shortly.

President Lincoln had implemented the Emancipation Proclamation in 1863 during the war, as an executive order to free the slaves. After the war it was necessary to codify the Executive Order into legislation, which resulted in the 13th Amendment. It took 27 of the 36 existing states to ratify the Amendment. Ten of the Southern states agreed to ratification.

From the Utah Supreme Court Case in a dirty trick and act of duress number one:

“When the 39th Congress assembled on December 5, 1865, the senators and representatives from the 25 northern states voted to deny seats in both houses of Congress to anyone elected from the 11 southern states.  The full complement of senators from the 36 states of the Union was 72, and the full membership in the House was 240.  Since it requires only a majority vote (Article I, Section 5, Constitution of the United States) to refuse a seat in Congress, only the 50 senators and 182 congressmen from the North were seated.  All of the 22 senators and 58 representatives from the southern states were denied seats.”

The 13th Amendment was ratified by political trickery, but then along came the 14th Amendment on the heels of the 13th Amendment, to better clarify the citizenship of the now freed black slaves. Even more than that, the 14th Amendment was purposely designed to deny any Southern government official, either elected or appointed, from being able to hold public office in the re-united government if they have or had “engaged in insurrection or rebellion against the Northern Government, or given aid or comfort to the enemies thereof.” Of course, any existing public official from the 11 Southern states at the time, elected or appointed, obviously engaged in insurrection or rebellion during the war, from the perspective of the North and thus disqualified them from holding public office in the new government.

From the Utah Supreme Court Case in a dirty trick and act of duress number two:

“Despite the fact that the southern states had been functioning peacefully for two years and had been counted to secure ratification of the Thirteenth Amendment, Congress passed the Reconstruction Act, which provided for the military occupation of 10 of the 11 southern states.  It excluded Tennessee from military occupation, and one must suspect it was because Tennessee had ratified the Fourteenth Amendment on July 7, 1866.  The Act further disfranchised practically all white voters and provided that no senator or congressman from the occupied states could be seated in Congress until a new constitution was adopted by each state which would be approved by Congress, and further provided that each of the 10 states must ratify the proposed Fourteenth Amendment, and the Fourteenth Amendment must become a part of the Constitution of the United States before the military occupancy would cease and the states be allowed seats in Congress.”

“By the time the Reconstruction Act had been declared to be the law, three more states had ratified the proposed Fourteenth Amendment, and two – Louisiana and Delaware – had rejected it.  Then Maryland withdrew its prior ratification and rejected the proposed Fourteenth Amendment. Ohio followed suit and withdrew its prior ratification, as also did New Jersey. California, which earlier had voted not to pass upon the proposal, now voted to reject the amendment. Thus 16 of the 37 states had rejected the proposed amendment.””By spurious, non representative governments, seven of the southern states, which had theretofore rejected the proposed amendment under the duress of military occupation and of being denied representation in Congress, did attempt to ratify the proposed Fourteenth Amendment. The Secretary of State on July 20, 1868, issued his proclamation wherein he stated that it was his duty under the law to cause amendments to be published and certified as a part of the Constitution when he received official notice that they had been adopted pursuant to the Constitution.”

Which leads us to the ratification of the 16th Amendment, codifying into law the Federal Reserve and the federal income tax.

Even though the U. S. Supreme Court twice adjudicated the issue of whether the 16th Amendment was legally ratified, the debate on that ratification rages on in some circles with alleged evidence to back up their arguments.

There were 48 states at the time, thus requiring 36 states to ratify any constitutional amendment. When reviewing the ratification of the 16th Amendment, state by state, certain irregularities appear. Tennessee, Kentucky and Oklahoma were three states where the irregularities were readily apparent.

In Oklahoma, the legislature changed the wording of the Amendment such that the meaning was the opposite of what Congress intended.

In Kentucky, the words of the amendment, which the legislators were to vote upon, omitted the words from the Congressional Amendment “on income.”

If all three states were omitted from the states that ratified the Amendment, the 16th Amendment would have failed ratification.

The Central Bankers and many wealthy industrialists wanted the 16th Amendment to pass because an income tax provided security for all of the loans they would make to government by indenturing every American citizen to the debt. The law forced all present and future Americans to pledge the taxes of their lifetime earnings to secure that debt. Finally, in the 1930’s each American’s social security number became their loan number for all central bank loans to government.

Was there duress, intimidation and or favors, in one form or another, placed upon the legislators of the individual states to ratify the Amendment? Was that duress illegal? It cannot be construed otherwise.

Consequently, by skullduggery, duress and the threat of force and violence, Americans were forced to accept as law, the 14th and 16th Amendments to the U. S. Constitution, wherein the benefits of the Amendments favored a special few, while creating a form of indentured servitude and slavery on the rest of us.

Remember! The 14th Amendment led to “anchor babies” which created a giant magnet for illegal aliens to invade the United States, due to an unconscionable perversion of the Amendment by the U. S. Supreme Court. The invasion and the cost of that invasion, continues to grow and magnify, especially with sanctuary jurisdictions defying federal immigration laws and adding to the magnets. Each producing American is paying for that invasion in the billions of dollars. But the 14th Amendment also seriously diluted state’s rights under the Constitution, which the Utah Supreme Court Justices railed against.

Remember! The 16th Amendment has led to an income tax code of almost 75,000 pages of laws and regulations that no one, not even the IRS or your favorite tax preparer, CPA, or tax attorney, can interpret the same way, leading normal, reasonable and prudent American citizens to perjure themselves each time they sign Form 1040, or any other income tax form.

Former Secretary of Defense Donald Rumsfeld sends a letter to the IRS each year stating, and we paraphrase: “I have absolutely no idea whether my tax returns and my payments are accurate, even though I am a college graduate. The tax code is so complex and the forms are so complicated that I don’t know whether or not my tax returns are accurate and I am sure most Americans feel the same way. I have spent way too much money on tax firms to prepare my return.“

Sadly, the American people go on about their daily lives oblivious to the fact that they are quite likely being governed by laws and constitutional amendments that were passed in violation of that constitution. No! Not “quite likely.” Absolutely!

We have not taken on the 14th Amendment even though we strongly believe the “anchor baby” provision of the Amendment should be repealed. Instead, we are showing Americans how to fight the IRS at our “SAVE THE USA” website. In addition to the website, we have created two, 3-to-4 minute Youtube videos. One is entitled, “The IRS Blows My Mind” and the second is entitled “The IRS Took My Car Away.” These videos are poetic takeoffs on IRS injustices, set to very familiar music. The videos are entertaining, emotionally appealing and convey the frustration of millions of Americans with the IRS. You may even see yourself in one or both of the videos.

Congress is not going to fix or abolish the IRS in the short or long term because it would take away the power of the Congress to control every aspect of our lives. Since Americans have no intention of getting involved to abolish the IRS, we have to learn how to live with them. If we have to live with them, we might as well know how to fight them.

Ron Ewart, a nationally known author and speaker on freedom and property rights issues and author of this weekly column, “In Defense of Rural America.” Ron is the president of the National Association of Rural Landowners (NARLO) (www.narlo.org), a non-profit corporation headquartered in Washington State, acting as an advocate and consultant for urban and rural landowners.  Affiliated NARLO websites are “SAVE THE USA” (http://www.stusa.us/) and “Getting Even With Government” (http://www.gewgov.com/). Ron can be reached for comment HERE.

The Underhanded Skullduggery to Pass the 14th Amendment added on Sunday, June 18, 2017