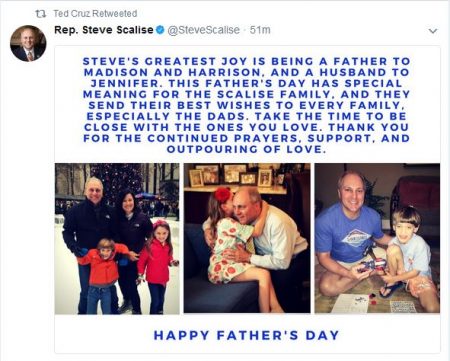 On Wednesday, Scalise was one of five victims of a politically-motivated, targeted shooting at a baseball field on Wednesday in Alexandria, VA as the Republican team practiced for its annual charity game against the Democrats.

Two Capitol Police officers, a congressional aide, a lobbyist and Scalise were injured and taken to the hospital following James Hodgkinson’s firing of between 50 and 60 bullets onto the ball field shortly after 7:00 AM EDT that day.

Hodgkinson was wounded by the Capitol Police’s defensive shots and later died.  Officer Crystal Griner remains hospitalized with an injury to her ankle, while her counterpart, David Bailey, was discharged prior to the baseball game on Thursday evening for which he threw out the first ball.

The lobbyist, Matt Mika, who was shot in the chest, is said by doctors to be on his way to a full recovery after suffering a punctured lung.

Congressional aide Zach Barth was discharged early on with a leg injury and has reportedly returned to work.

Scalise had been in critical condition until Saturday, when his condition was upgraded by MedSTAR Washington Hospital Center to “serious.” He has undergone at least three operations and other procedures to stop life-threatening bleeding.

In an update issued on Friday afternoon, Dr. Jack Sava made public the fact that Scalise was in a near-death situation when he arrived at the Level 1 Trauma facility in shock from loss of blood. Dr. Sava credited the many first-responders for their swift action once the 911 call was made at 7:09 Wednesday morning.

Saturday’s update reads: “Congressman Steve Scalise is in serious condition. He underwent another surgery today, but continues to show signs of improvement. He is more responsive, and is speaking with his loved ones. The Scalise family greatly appreciates the outpouring of thoughts and prayers.”

Scalise is married with two young children.  On Friday, Sava said that Scalise will require considerable time in the hospital and later, for rest and rehabilitation.

As Republican Majority Whip, Scalise was accompanied Wednesday morning by the Capitol Police security detail, although the vast majority of Congressmen are not.  In the frenzied aftermath of the attack, Sen. Rand Paul said that without Griner and Bailey’s presence and quick response, a “massacre” would have occurred.

Members of Congress are now contemplating changes to their security protocols as well as possible legislation allowing them to carry a handgun in the District of Columbia.  Many have announced plans to cancel what would have been routine townhall meetings with their constituents during times when they are not in Washington.