WHO “TOLD” TRUMP TO FIRE COMEY? 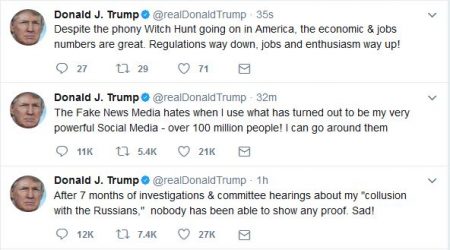 (Jun. 16, 2017) — On Friday morning, President Donald Trump tweeted about several key issues on which he has strong opinions: the media, the “Russia” investigation, and job-creation in order to grow the U.S. economy.

In response to at least two congressional investigations and an FBI probe launched into whether or not any of his campaign aides had improper communications with Russian operatives, Trump tweeted at approximately 8:00 a.m. EDT, “After 7 months of investigations & committee hearings about my ‘collusion with the Russians,’ nobody has been able to show any proof. Sad!”

As he did on Friday, Trump has often called the “collusion” allegation the basis for a “witch hunt” and said that the media continues to publish “fake news” in order to keep the issue alive.

While Trump took office on January 20 of this year, contents of telephone calls between his then-national security advisor designee Michael Flynn and Russian ambassador Sergey Kislyak were leaked to the press beginning in late December demonstrating that Flynn mischaracterized the scope of those conversations to Vice President Mike Pence.

The firestorm which arose, particularly from members of the mainstream media, reached a fevered pitch until Flynn resigned on February 13 after just 24 days on the job.

On June 8, former FBI Director James Comey testified to the Senate Intelligence Committee that he felt pressured by a conversation he claimed Trump initiated with him the day after Flynn’s resignation to cease its investigation of Flynn.

Many in the mainstream media did not appear to understand, or else mischaracterized, Kasowitz’s implication of Comey as having “leaked” more than one of his purported memoranda memorializing his meetings with Trump beginning on January 6, 2017 through April 11.

Comey was fired on May 9, catching Washington, DC politicos and the media by surprise. A letter written by Deputy Attorney General Rod Rosenstein dated that day indicated that as Comey’s direct supervisor, Rosenstein viewed Comey’s handling of the Hillary Clinton private email server investigation last year to have been a usurpation of Justice Department authority.

During his recent testimony, Comey said that then-Attorney General Loretta Lynch had insisted that he publicly refer to the Clinton email server probe as a “matter” and not an “investigation.”

On Thursday, Trump tweeted his frustration with what he sees as Clinton’s facile exoneration of any wrongdoing but an inquiry into “obstruction of justice” reportedly under way by Mueller as reported by The Washington Post on Wednesday evening citing unnamed “officials.” 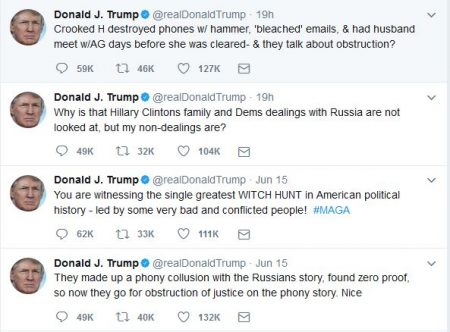 On Tuesday, Trump traveled to Wisconsin to hold a technical-training roundtable with Gov. Scott Walker, Secretary of Labor Alexander Acosta, and Secretary of Education Betsy DeVos to promote technical education and apprenticeships.

During his June 8 testimony, Comey also said that he leaked one of his memos to a Columbia Law School professor, Daniel Richmond, with instructions to Richmond to leak it to The New York Times with the purpose of prompting the hiring of a Special Counsel.

On May 17, Rosenstein announced that former FBI Director Robert S. Mueller, III was contracted to serve as Special Counsel to oversee the FBI’s two-pronged investigation into the Trump “collusion” allegation and whether or not Russian operatives interfered in last year’s U.S. elections.

CBS reported that on or about May 16, Trump interviewed Mueller about the vacant FBI director position.

Many have raised concerns about Mueller’s impartiality and called for him to resign given that he and Comey were well-acquainted in the past and Comey is a key witness in the Russia investigations.

As the story was under preparation, Trump issued a new and possibly revealing tweet:

It is unclear whether Trump was referring to Rosenstein, Mueller, or someone else. In an interview with NBC news which aired on May 11, Trump said that whether or not Rosenstein and Attorney General Jeff Sessions agreed, he would have terminated Comey.

On March 2, Sessions formally recused himself from the Russia investigations based on his having been a Trump campaign surrogate during the 2016 election cycle.

In sworn testimony in front of the Senate Intelligence Committee on Tuesday, Sessions affirmed some of Comey’s June 8 statements but contradicted Comey in his recollection of the February 14 Oval Office meeting with Trump.

Comey and Trump were reportedly alone for several minutes after the meeting was adjourned. In his testimony, Comey claimed that Trump pressured him to “let go” of the probe into whether or not Flynn had acted improperly during the transition period or afterward in regard to his communications with the Russians.

A number of commentators on the political right and a presidential historian have opined that the “deep state,” along with the mainstream media and “the far left,” is attempting a “coup d’état” of the Trump administration in order to return power to entrenched Washington, DC political elites.

Later this morning, Trump will speak and sign a presidential directive in Miami about his intention to rescind some Obama-era policies toward the communist nation of Cuba 90 miles to the south. Trump reportedly intends to return to a restriction on individuals’ travel to Cuba and limit transactions which would benefit the Cuban government and military.

Trump intends to retain some of Obama’s policies, including the respective embassies established in Havana and Washington.