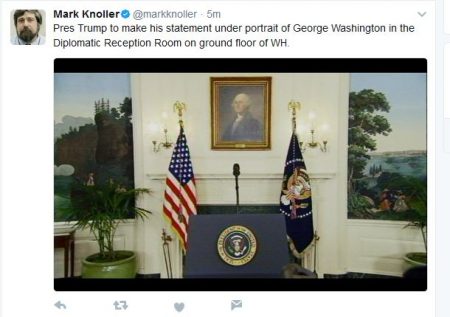 (Jun. 14, 2017) — According to Mark Knoller of CBS News, President Donald Trump will be making a public statement in the Diplomatic Reception Room at the White House at 11:30 a.m. in response to a shooting of members of Congress while practicing for an annual charity baseball game on Thursday.

The Capitol Police were present as security detail for Rep. Steve Scalise (R-LA), who was wounded and taken by helicopter to an area hospital.

Four others were wounded, including two Capitol Police officers and a congressional staffer.  The fifth person is believed to be the shooter, who has been identified as 66-year-old James Hodgkinson of Illinois.

It appears that Scalise’s security team was the only security present.  Scalise reportedly has security because of his position within the House of Representatives.

Leaders of the House will be making remarks from the House floor later today.

Both Trump and Vice President Mike Pence have altered their schedules due to the incident.

Eyewitnesses and law enforcement have lauded the Capitol Police who responded to the shooter with rapid fire.

A press conference at 10:30 EDT in Alexandria revealed that the FBI will be assuming the investigation following initial responses from the Alexandria Police Department, the Alexandria County Sheriff’s Office, and the Capitol Police who were present.