CONSIDERS HORSE CRUELTY A UNIFYING ISSUE FOR ALL AMERICANS 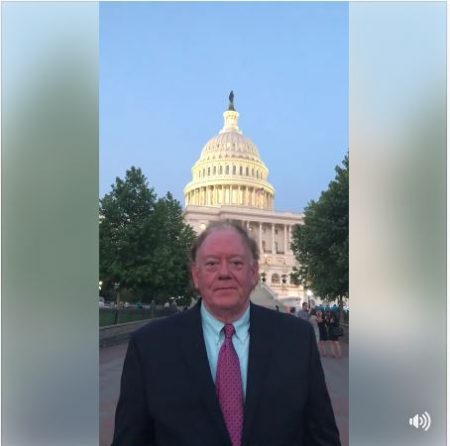 (Jun. 13, 2017) — On Monday, a horse-welfare advocate posted a video on his Facebook page from Washington, DC, where he is attending the annual meeting of the American Horse Council (AHC) June 11-13.

Clant Seay, founder of Concerned Citizens Against Big Lick Animal Cruelty (CCABLAC), says that he wants the practice of “soring” of Tennessee Walking Horses and other gaited breeds intended to produce the exaggerated gait known as the “Big Lick,” to cease.

The practice has reportedly been passed down through generations of trainers after a horse-owner decades ago discovered that rubbing kerosene, mustard oil or diesel fuel on his horse’s front legs for medical reasons caused it to snap up its foot in pain.  Once transferred to the show ring, where certain judges and spectators had developed an admiration for the high-stepping gait, the modern-day “Big Lick” developed into an industry.

The AHC has taken a position against soring.

In the video, Seay provided an overview of a federal regulation proposed last year which would have prohibited Tennessee Walking Horses and other “gaited” breeds from being outfitted with “stacks,” or heavy platform shoes nailed to a horse’s front hooves, and chains, which some horse show proponents say simply cause the horse to lift its legs a little higher in the ring.

Stacks and chains have been known to be used in coordination with a process called “soring,” which purposely irritates the horse’s front pasterns so that it will snap its legs up quickly in an exaggerated movement. While some former trainers and active veterinarians have gone on the record to say that the desired show-ring gait cannot be obtained without the horse having been sored, supporters of some of the larger horse shows in the South say that the animals are not tortured before competing.

The federal regulation was reportedly set to be published in the Federal Register in the waning days of the Obama administration for the customary period of scrutiny by the public but ultimately was not issued.  Shortly after Donald Trump took office, he placed a moratorium on all new federal regulations until which time they could be evaluated for efficacy by the new administration.

Falling under the U.S. Department of Agriculture, no public announcement about the rule has been made.  Newly-installed USDA Secretary Sonny Perdue was the last of Trump’s cabinet nominees to be approved by the U.S. Senate.

The 1970 Horse Protection Act was aimed at prohibiting a sored horse from participating in competition, being sold at auction, or transported to any event, but critics and animal-welfare group say that it has been ineffective in stopping the practice of soring.

In his latest video, Seay said that the AHC is unsure as to the status of the federal regulation.

In a new revelation, Seay reported that Rep. Ted Yoho (R-FL3) of Florida will address the AHC on Tuesday. “We look forward to speaking with Congressman Yoho at that time,” Seay said in Monday’s video.

A large-animal veterinarian by profession, Yoho has publicly voiced opposition to soring and met personally with Seay and several supporters in late March. At the time, Yoho had promised to reintroduce the “PAST” Act, which failed in Congress between 2014 and 2015 for various reasons.

Rep. Kurt Schrader (D-OR5), also a veterinarian, has also condemned the practice of soring, with his Deputy Chief of Staff meeting with CCABLAC members during CCABLAC’s March 29 visit.

Following his visit to Washington, Seay attended the annual Gulf Coast Charity Horse Show in Panama City Beach, FL, where he was allegedly threatened by show manager Todd Fisher while taking video of the grounds where the show was to take place beginning the following day.

In late May, Seay won a significant ruling in a First-Amendment lawsuit he filed against Maury County, TN Sheriff Bucky Rowland last year such that he was permitted to take video and photos of the Columbia Spring Jubilee Horse Show held June 1-3, 2017.

Seay and members of his organization have reported having to hire professional security to attend horse shows where their views are unpopular.  Seay told The Post & Email that large sums of money are at stake where “Big Lick” tactics are allegedly used on the horses.  According to Seay, USDA horse inspectors have been threatened and insulted by “Big Lick” supporters.

“There’s only one solution to this; that’s for the American people to insist this end…” Seay said.  “Let’s join together; let’s help,” he urged.