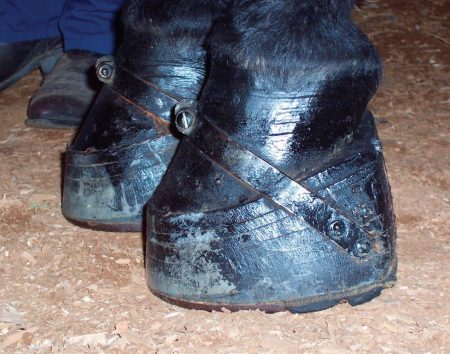 At last year’s event, Rowland, his deputies and a show videographer allegedly told members of Concerned Citizens Against “Big Lick” Animal Cruelty (CCABLAC) to “turn off those video cameras,” claiming that posting video would amount to copyright infringement.

Since 2014, CCABLAC has attended horse shows and events concerning horse welfare throughout the South and in New York City to protest what it says is cruelty to Tennessee Walking Horses and other gaited breeds. The group’s founder, Clant M. Seay, describes Tennessee Walking Horses exhibiting an exaggerated gait in which their weight is unnaturally thrown to their back legs from human-caused pain in the front legs as victims of the “Big Lick,” a practice he and many others want ended.

The process of inflicting pain on the horse to make it lift its legs higher is known as “soring” and reportedly is the basis of the “Big Lick.”  The performance style uses “stacks,” or heavy vertical shoes on the horse’s front legs, sometimes with added weights inside as well as the application of caustic chemicals to the horse’s pasterns.

Although soring was rendered illegal by the 1970 Horse Protection Act, the use of “stacks” and six-ounce chains on the horse’s lower pasterns is allowed.  Seay and his supporters maintain that the chains irritate the horse’s skin, already tender from soring, so that it lifts its front legs unnaturally high in the show ring and want stacks and chains outlawed completely.

The Humane Society of the United States (HSUS) has called soring a “culture of cruelty.”

In late March, Seay and several others met in Washington, DC with an aide for Rep. Kurt Schrader (D-WA) and Rep. Ted Yoho (R-FL), both of whom are veterinarians by profession and have voiced support to stop soring.  As a result of that meeting, Yoho pledged to re-introduce the “PAST” (Prevent All Soring Tactics) Act, a bill originally proposed in 2015 which did not become law.

Proponents of the shows in which horses are seen wearing “stacks” and chains say that the horses are not tortured and can be taught the desired performance gait without the use of harsh chemicals.  They claim that the USDA inspections conducted as a result of the Horse Protection Act are sufficient and that the industry is able to discipline itself so that sored horses do not compete, in accordance with the law.

Some trainers have said that they were taught to “sore” horses from a very young age by their fathers, who were also trainers, and that it was an accepted practice for decades.  Former “Big Lick” trainer Carl Bledsoe has demonstrated for Seay how evidence of soring is obscured before an inspection.

As a result of Rowland’s actions last year, Seay, a retired attorney and horse owner, filed a federal lawsuit in the U.S. District Court for the Middle District of Tennessee, claiming First and Fourteenth Amendment violations on the part of Rowland and his deputies.  In May, with the show approaching imminently, Seay filed a Motion For Preliminary Injunction and a Motion For Emergency Relief.

Although Rowland denied the allegations, in an order issued May 30, U.S. Magistrate Judge Alistair Newbern affirmed an agreement between the plaintiff and defendants which stated, “No employee of the Maury County Sheriff’s Department will enforce any statute, regulation, provision, policy, or practice at the 2017 Columbia Spring Jubilee Horse Show taking place June 1-3, 2017, that would in any way infringe upon Mr. Seay’s First Amendment rights.”

At the same time, the ruling upheld the responsibility of the sheriff’s office to “enforce applicable laws and ensure the public’s safety.”

The new video footage is posted at a change.org petition launched by CCABLAC to raise funds to continue its work as well as on its Facebook page.

Its attendance at the show was reported on the front page of Thursday’s Columbia Herald along with a sizable CCABLAC ad showing a horse with stacks” and chains.

The petition indicates that CCABLAC feels the necessity to be accompanied to horse shows by paid security personnel.  At the Panama City Beach, FL Gulf Coast Charity Horse Show in late April, show manager Todd Fisher allegedly told Seay, as he was filming preliminary show activities, “You are a dead man.”

Seay has pressed charges against Fisher.  Threats against USDA inspectors and veterinarians have also been reported.