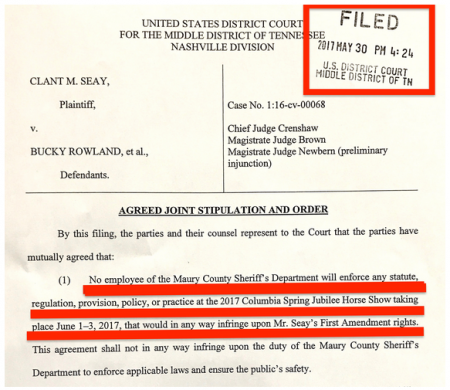 (May 31, 2017) — On Monday, citizen journalist and horse-welfare activist Clant M. Seay posted a “Agreed Joint Stipulation and Order’ from a federal judge in Nashville, TN mandating that the First Amendment rights of Seay’s horse-welfare organization be upheld at the annual Columbia Spring Jubilee Horse Show, which begins on Thursday.

In 2014, Seay founded Concerned Citizens Against Big Lick Animal Cruelty (CCABLAC) to protest what he says is an exaggerated gait brought on by painful techniques used on some Tennessee Walking Horses, primarily in the South.

A former horse owner and retired attorney, Seay has traveled with like-minded advocates to New York City, North Carolina, Alabama, Florida, Mississippi, and Washington, DC to take their message directly to the people and members of Congress to expose what has come to be known as the “Big Lick.”

At last year‘s Columbia Spring Jubilee, Seay captured on video Maury County Sheriff Bucky Rowland telling his colleagues and him to turn off their video cameras.  Rowland claimed that the rights to videotape the horse show were proprietary and so stated in an unnotarized affidavit dated June 4, 2016, after the show concluded.

Rowland has denied the allegations.

With the 2017 show imminent and the lawsuit unresolved, on May 17, Seay filed a Motion For Preliminary Injunction and on May 25, a Motion For Emergency Relief.  Monday’s ruling is a result of those actions.

Another video Seay posted depicts a deputy and Mr. Jerry W. Harris speaking with a horse-welfare advocate in a lengthy conversation, with Harris telling her that if she were to take video of the show and post it on the Internet, “I will come after you.”

The behavior of the sheriff’s office prompted Seay to file a lawsuit last August in the U.S. District Court for the Middle District of Tennessee on the basis that his and others’ First and Fourteenth Amendment rights had been violated.

Earlier this year, depositions were taken for the lawsuit.

As this writer has discovered, proponents of the exaggerated gait and those claiming that it stems from torture have been clashing for decades.

Prices skyrocketed as the horses became an all American symbol for the media. But with recession in the 1950s, the Walking Horse industry hit a slump.[2]

Stories differ, but it was around this time that a showman discovered that either mustard oil, being used to treat a hoof ailment, or kerosene used to clean some road tar off the lower legs, caused his horse to step livelier.

Come the regular Saturday night show, this horse snapped his feet off the ground like they were on fire. Wild-eyed, he all but flew around the ring, barely setting a foot on the ground before snatching it back up again. The crowd loved it. Experimentation followed. Then imitation. Before long, “the fix” was in.[3]

Seay and his supporters have said that they do not oppose horse shows but would like to see Tennessee Walking Horses compete as flat-shod.  He said that “Big Lick” shows are often conducted ostensibly for charity but that huge profits are made from advertising. “The trainers make a living, and the owners spend the money to fuel the racket, but the real money is the advertising,” Seay told us.

In 1970, after soring was no longer a secret, Congress passed the Horse Protection Act intended to prevent the buying, selling, transport, or competing of a horse found to have been “sored.”  The Act provided that Designated Qualified Persons (DQPs) dispatched from the USDA were to inspect horses for signs of soring abuse, operating on an annual  budget of $500,000.

The Act, however, allows “stacks” to be attached to the horse’s hooves as well as chains weighing up to six ounces.

Trainers who say they have practiced soring have revealed techniques they say they and others used to mask chemical treatments and the resulting pain at the time of inspection.  Some trainers reportedly teach the horse, through painful negative reinforcement, not to react when the sensitive areas are probed for signs of soring.

In January, National Celebration President and CEO Mike Inman told The Post & Email that horses are inspected multiple times at the event, which is held annually in Shelbyville, TN, and that semifinalists are inspected again before their final competition.

Instances of violence or threats of violence have erupted between proponents of the horse shows where horses’ gait is exaggerated and Seay’s group.  At the annual Panama City Beach, FL horse show in late April, show manager Todd Fisher is heard in a recording allegedly telling Seay, “You’re a dead man” while Seay took video of the horses during their warm-up exercises.

Fisher and Seay have similarly faced one another before at horse shows in Tennessee and Mississippi.

During warmup exercises at Panama City Beach, Seay was videoing an approaching horse wearing stacks and lifting its front legs high.  When the rider saw Seay with his video camera, he slowed the horse down, turned her around, and maintained her pace at a walk as they left the area.

The Post & Email has spoken with a second individual associated with the National Celebration who told us that horses can be taught the exaggerated gait without the trainer using harsh techniques.  He additionally said that the platform shoes worn by horses competing in that show and others do not cause damage or pain to the horse as it walks.

Since early January, The Post & Email has unsuccessfully sought to speak with a trainer who can explain how the horses are taught to exaggerate their gait.

On his blog, billygoboy.com, Seay depicts that the oversized shoes weigh close to 8 pounds each. When we asked the National Celebration spokesman if that were true, he said, “No, they weigh less than that,” but did not say how much.

When we asked the purpose of the chains worn during competition, he said that they “make the horse step higher.”

A former trainer, Carl Bledsoe, went on camera with Seay and demonstrated how, in his experience, a horse whose forelegs have been chemically treated with harsh substances is prepared for inspectors prior to the show. Bledsoe maintains that without the chemical treatments, which include wrapping of the horse’s forelegs overnight to increase the irritation to the horse’s skin, the “Big Lick” gait could not happen.

Bledsoe has also interviewed on the topic with WHNT, Channel 19 in Alabama and written a letter to Rep. Ed Whitfield of Kentucky.

In response to the judge’s order on Monday, Seay said, “We thank the good citizens of Columbia, Maury County, Tennessee for BOYCOTTING last year’s Columbia “Big Lick” Spring Jubilee.  We ask them to do so again this year.   CCABLAC animal welfare advocates and BIllyGoBoy.com reporters will again freely and fully exercise their First Amendment rights at the Maury County Park on June 1 – 3, 2017.  We have demonstrated with this First Amendment civil rights litigation that we will vigorously defend the sacred rights conferred upon all Americans by the First Amendment to the U. S. Constitution.”