Inmate Letter: “I Cut a Main Artery in My Arm”

REPORTS “NO RECORD OF THE INCIDENT” 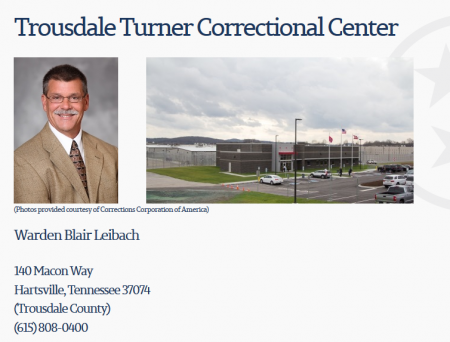 (May 26, 2017) — On Friday, The Post & Email received a letter from an inmate at the Trousdale Turner Correctional Center (TTCC) in Hartsville, TN detailing a mental-health condition which led him to reportedly attempt suicide.

The inmate is the second from the Hartsville facility, which is owned and operated by CoreCivic, to relate such a story. The first, Ricky Lynn Greene, gave his permission for us to use his name and publish his letters in which he sought help from prison medical staff on a variety of medical and mental-health issues.

After suffering a heart attack and reportedly spending more than 24 hours alone in a prison shower stall, Greene told The Post & Email that he became despondent and attempted suicide. He said he was rescued by a conscientious medical staff member and referred for a mental health evaluation.

It is unclear whether or not the evaluation took place.  Green said he never received a response regarding his report of a PREA violation as is required by Tennessee law.  He further reported that out of desperation due to his surroundings, he attacked a correction officer so as to be sent to another institution, which he acknowledged would be maximum-security.

CoreCivic has not responded to several requests for comment from this publication on the conditions within the Tennessee prisons it operates, which total four.  The Tennessee Department of Correction (TDOC) has denied that such reported problems as chronic short-staffing, gang activity, irregular dispensing of medications, and excessive use of force by correction officers exist within the state’s prisons, including those run by CoreCivic.

The presence of mentally-ill persons who are incarcerated is said by the World Health Organization (WHO) to be “especially prevalent in prison populations.”

The disproportionately high rate of mental disorders in prisons is related to several factors: the widespread misconception that all people with mental disorders are a danger to the public; the general intolerance of many societies to difficult or disturbing behaviour; the failure to promote treatment, care and rehabilitation, and, above all, the lack of, or poor access to, mental health services in many countries. Many of these disorders may be present before admission to prison, and may be further exacerbated by the stress of imprisonment. However, mental disorders may also develop during imprisonment itself as a consequence of prevailing conditions and also possibly due to torture or other human rights violations.

In the past decade, America has been locking up increasing numbers of individuals with mental health conditions.[3] MHA is both concerned by and opposed to the increasing use of criminal sanctions and incarceration, replacing the state mental hospitals with much more drastic curtailment of personal liberty and preclusion of community integration and community-based treatment.[4] Prisoners with mental health conditions are especially vulnerable to the difficult and sometimes deplorable conditions that prevail in jails, prisons, and other correctional facilities. Overcrowding often contributes to inadequacy of mental health services and to ineffective classification and separation of prisoner classes. It can both increase vulnerability and exacerbate mental illnesses. For these and other reasons, MHA supports maximum reasonable diversion.[5]

The federal Bureau of Prisons (BOP) “Mental Health” section states that the agency “provides a full range of mental health treatment through staff psychologists and psychiatrists.”

Regarding suicide prevention, the BOP reports that staff members “receive rigorous training and engage in prevention efforts throughout an inmate’s confinement. The BOP’s suicide rate is lower than that of the United States population as a whole, however, one life lost is one too many. Therefore, BOP staff is ever-vigilant in their efforts to both prevent suicide and respond rapidly to potential crises.”

After a lawsuit filed by a private organization against the Pennsylvania Department of Corrections resulted in a 2013 U.S. Department of Justice investigation, a change in the way inmate mental-health issues as they relate to the use of solitary confinement was effected, as described in a September 2016 CNN report.

That practice resulted in “serious harm” to inmates. That year, 206 of 288 documented suicide attempts took place in the isolation units.

The investigation, which was closed in April, resulted in an overhaul of the department’s approach to mental health care.

The result was that all correctional staff are now required to take an eight-hour course in mental-health first aid.  Some inmates also participate.  Also, CNN reported, solitary confinement is no longer used for mentally-ill inmates.

In 2014, a federal class-action lawsuit was filed against the Alabama Department of Corrections alleging that the system does not provide treatment for mentally-ill prisoners in violation of the Eighth Amendment.  The ADOC disputed the claim, and a decision is pending following a December 2016 non-jury hearing.

The letter received Friday is written in bright-colored ink and therefore did not scan clearly; The Post & Email is therefore presenting it below with a typed transcript. The inmate’s name and that of a relative have been redacted for privacy reasons. Typographical errors are presented as they appear.

I Received your Info from another Inmate. He Told me to write you, and that you might could help me.

My Name is XXXXXXXXXX (TDOC #XXXXXXX) I am a Inmate of T.d.O.C house currently at Trousdale Turn Corr. Center.

I have had sever problems concerning my mental health. Im diagnosed Bipolar and have Hypo-manic. On April 21 I cut a main artery in my Arm and was sent to the Hartsville Hospital. I was placed on suicide watch for three days then Released.

Since then I have asked Everyone to see M. H. And cannot get M. H to see me. Because of the mental strain I am being put through due to the being 23 and on close custody; I tried to take my own Life.

I have No Reason to Lie. And All I want is for my mental illness to be treated.

I appreciate your time. And any help you can give concerning my matter. One Response to "Inmate Letter: “I Cut a Main Artery in My Arm”"