OVER INTERNET ENTREPRENEUR CLAIMING TO HAVE EVIDENCE IN SETH RICH CASE 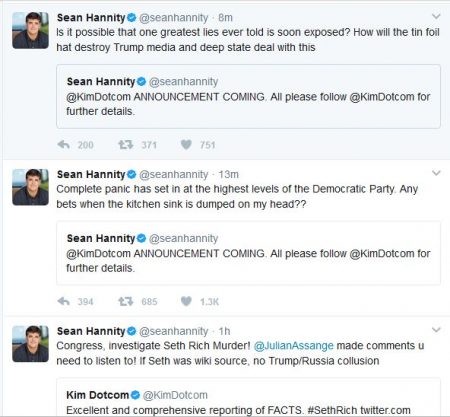 (May 21, 2017) — Just before 10:00 PM EDT on Sunday night, Fox News host Sean Hannity tweeted an update to his announcement made on Saturday that he would be hosting special guest Kim Dotcom, an Internet entrepreneur who claimed on Friday to have first-hand evidence that slain DNC staffer Seth Rich was a source of documents for the open-government organization Wikileaks.

The Twitter conversation between Dotcom and Hannity began on Friday during Hannity’s 10:00 PM broadcast, which included a short discussion of the case with guests Juan Williams and Jay Sekulow of the American Center for Law and Justice (ACLJ).

Rich, a 27-year-old DNC staffer working in the area of voter registration, was killed in cold blood in what has been described officially as a “botched robbery.” However, his watch, cell phone and a necklace were found on his person when police arrived at the scene in the early hours of July 10, 2016.

The murder has remained “unsolved.”

On Friday, Dotcom tweeted that he had evidence that Rich provided thousands of emails to WikiLeaks gleaned from the servers of the Democratic National Committee (DNC).  “I knew Seth Rich,” Dotcom tweeted.  “I know he was the Wikileaks source.  I was involved.”

Last September, a number of mainstream media reports published Donald Trump’s speculation during the first presidential debate that the DNC hackers could have been “the Russians, Chinese and a ‘400-pound guy’ lying in his bed.”

Kim Dotcom is heavy-set and could weigh that much.

Interestingly on Sunday, both left-leaning and right-leaning media outlets denounced the theory that Rich might have been murdered as a result of his having provided thousands of emails to WikiLeaks which proved damaging to the DNC, insisting that it had been “debunked.”

A Fox affiliate in Washington, DC, Fox5, was pressured to remove its renewed reporting on the murder, which began on Monday when private investigator Rod Wheeler said that he possessed evidence that Rich had communicated with Wikileaks by email.

A media firestorm arose when Wheeler stated something different to subsequent media outlets to whom he provided interviews.  Rather than reporting he had seen the evidence himself, Wheeler corrected the record to say that he obtained information from an unnamed “federal investigator” who claimed to have seen verifiable evidence that Rich had communicated with WikiLeaks on thousands of occasions.

Fox5 issued a clarification with Wheeler’s altered statement but did not remove or retract its previous coverage.

Fox News’s Malia Zimmerman reported on Tuesday that she had spoken to the investigator, who wished to remain unnamed but reportedly confirmed having seen evidence that Rich had sent thousands of emails and attachments to WikiLeaks.

After Wheeler changed his statement, a plethora of left-leaning media outlets reported that he had completely retracted his story when that was not the case.  He did not retract his claims that the Washington Metro Police Department (MPD) refused to speak with them about details of the crime; that when he called the Rich family on one occasion, the family had already been contacted by someone from the DNC who knew he would be calling; and that an officer within the MPD had told him face-to-face that the MPD had been told to “stand down” the investigation.

On Saturday, The Washington Post’s Dave Weigel wrote an editorial labeled “analysis” which attempted to deconstruct the theory that Rich had been in touch with WikiLeaks before he died. The story was widely disseminated on the internet and Twitter on Sunday as push-back against Hannity’s elevating of the case’s profile.

“The absolute faith that there will one day be proof of this conspiracy theory — proof that Democrats carried out a political murder to punish a leak that had already happened — is impervious to reality…” Weigel wrote, later commenting on Twitter that two reporters investigating the crime, The Gateway Pundit and Jack Prosobiec of Rebel Media, regularly send their reporters to the White House press briefings.

On Sunday morning, a lawyer suing the DNC for its alleged favoritism toward Clinton during the primaries tweeted of Weigel: 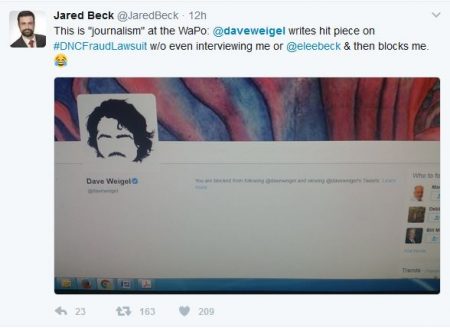 In his “analysis,” Weigel attempted to make the case that the emails published by WikiLeaks last July showing that the DNC had favored Clinton over Sanders did not present anything that was not known before. After the emails were published, DNC chairwoman Debbie Wasserman Schultz was compelled to resign just prior to the DNC’s nominating convention.

Many Sanders supporters cried foul and protested outside of the convention, claiming that their votes in the Democratic primaries had been disenfranchised and that the system was broken.

Many have observed that if it is confirmed that Rich was WikiLeaks’ source of the emails, at which Wikileaks founder Julian Assange has at least hinted, the narrative disseminated to the public from the U.S. intelligence community that the Russian government “hacked” the DNC servers could crumble.

A “progressive” PR crisis consultant, Brad Bauman, has been speaking for the Rich family and vehemently told a WND reporter on Thursday that “Anyone who believes Rich may have leaked DNC emails ‘deserve [sic] a place in hell.'”

On Saturday, Hannity stated that he planned to host Dotcom on both his television and radio shows.  Dotcom stated on Twitter and his website that he would be meeting with his attorneys on Monday and would make a statement about the Seth Rich case on Tuesday.  “This needs to be done properly,” Dotcom wrote.

The Washington Examiner, The Daily Caller, NBC News, CNN, The Washington Post, RedState, and other media continue to conduct a discrediting campaign against Hannity, Dotcom, and anyone else looking into the cause of Rich’s death.

One America News (OAN), Mike Cernovich, ZeroHedge, Prosobiec, and this publication have been reporting the new developments in the case, some of which have been tweeted under the hashtag #SethRich.

A number of mainstream reports say that although the U.S. intelligence community declared the DNC server breach the work of the Russian government, the FBI never examined the servers; rather, the DNC hired a company named Crowdstrike to allegedly perform an examination.

In his Sunday night tweets, Hannity added, “Complete panic has set in at the highest levels of the Democratic Party. Any bets when the kitchen sink is dumped on my head??”

Hannity: “Complete Panic at Highest Levels of Democratic Party” added on Sunday, May 21, 2017