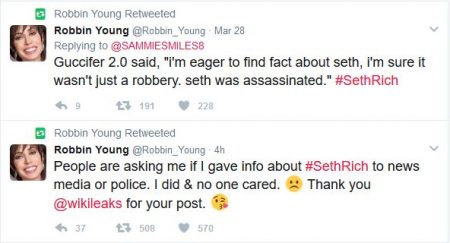 (May 16, 2017) — Late on Tuesday morning, Fox News host Sean Hannity tweeted to a woman reporting that she exchanged instant messages with “Guccifer 2.0” about murdered DNC staffer Seth Rich last year that he is “looking into all of this.”

Rich was a paid DNC staffer responsible for conducting voter-registration and access; he was based in Washington, DC.

In a release made public in early April by Robbin Young, Guccifer 2.0 appears to have told her in a series of instant messages last summer following Rich’s death that someone named “seth” was his “whistleblower.”

Guccifer 2.0 has been said to be connected to “the Russians,” who allegedly “hacked the election” and DNC servers last summer, as determined by “the intelligence community.”

On April 10, Fox News Channel reported on the alleged instant messages between Guccifer 2.0 and Young.

On Monday night, a local Fox affiliate, Fox5, broke the news that a detective investigating Rich’s death independently of the Washington, DC Metropolitan Police Department (MPD) claims to possess evidence that Rich was in contact with WikiLeaks before he was killed.

On Tuesday morning, the Fox News Channel expanded on that report, quoting the same detective, Rod Wheeler, who is also a Fox News contributor, alleging a potential “cover-up” on the part of politicians.   Wheeler stated that an MPD officer told him face-to-face that the department was told to “stand down” rather than pursue the investigation.

The Fox report stated that a “federal investigator” who spoke to them directly corroborated Wheeler’s claim.  “The federal investigator, who requested anonymity, said 44,053 emails and 17,761 attachments between Democratic National Committee leaders, spanning from January 2015 through late May 2016” were sent by Rich, Fox reported.

On Tuesday morning, Rich’s family pushed back at Wheeler’s revelations, calling them “unsubstantiated.” In a statement, the Rich family said that Wheeler was not authorized to speak to the press and that they remain unconvinced that their son is the source of the tens of thousands of emails provided to Wikileaks, which began publishing them on July 22 of last year.

Rich’s killing has previously been described as a “botched robbery,” but media reports say that when he was brought to the hospital after taking two bullets, his watch and anything else of value remained on his person.

Rich died shortly after his arrival at the hospital.

WikiLeaks has offered a $20,000 reward for information leading to the conviction of the killer or killers.

On January 18, The Washington Post, which interestingly released a report alleging that President Donald Trump shared “highly classified” information with two Russian diplomats at approximately the same time the Rich story broke, reported as “rumors” internet speculation that Rich could have been in touch with WikiLeaks.

“What seems painfully obvious to his family is that Seth Rich was, instead, the victim of a botched holdup, one of a series of armed robberies in the neighborhood around that time,” The Post reported. “Interviews with more than a dozen people who knew Rich well, including several who spoke to him in the final hours of his life — as well as a previously unreported minute-by-minute log of Rich’s phone calls — fill in some of the blanks of that night. But they offer no hint that a conspiracy was at play.” 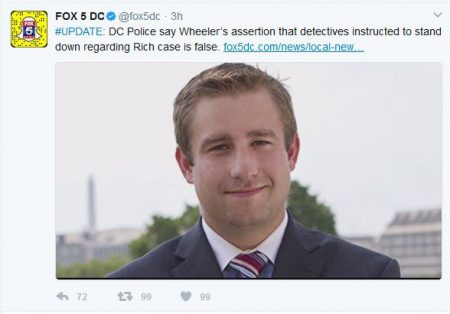 Slightly earlier in her Twitter timeline, Young claimed that she was threatened by an individual who reportedly hired Wheeler to assist Rich’s family in arriving at the truth of why their son was murdered.

On May 13, Young tweeted to Trump:

In her exchange with Hannity on Tuesday, Young thanked him for his interest in the story and said, “I just want justice for Seth Rich.”

If investigations conducted by Wheeler or the FBI ultimately prove that Rich was WikiLeaks’ source of the DNC emails, it could prove inaccurate multiple claims made by the media and the “U.S. intelligence community” that the DNC’s servers were breached by the Russian government.

Assange has consistently said that he did not receive the documents from a “state party.”

On Tuesday, left-leaning media are stressing the Rich family’s negative reaction to Wheeler’s report and that the murder “remains unsolved.”

But are they seeking the truth?

Sean Hannity Says He is “Looking Into” Seth Rich Murder added on Tuesday, May 16, 2017