WHO LEAKED MICHAEL FLYNN’S NAME TO THE PRESS? 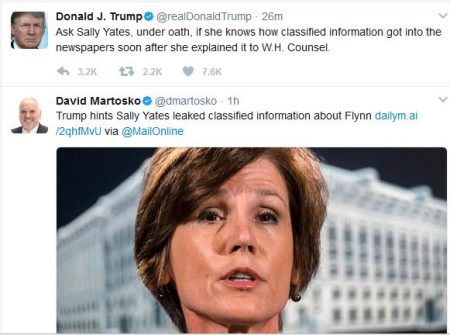 (May 8, 2017) — At approximately 10:45 EDT on Monday, President Donald Trump suggested on Twitter that former Acting Attorney General Sally Yates should be asked “if she knows how classified information got into the newspapers soon after she explained it to W.H. Counsel,” referencing a hearing at 2:30 this afternoon in which Yates is expected to testify to the Senate Judiciary Subcommittee on Crime and Terrorism.

Trump’s tweet appears to contradict several news reports stating that his administration did not wish Yates to testify, allegedly leading to the cancellation of the session which would have included her in late March.

Yates, a career government prosecutor, was terminated in late January for having refused to enforce Trump’s January 25 executive order restricting travelers from seven Middle Eastern nations as well as a temporary suspension of the refugee resettlement program.

Some reports say that Flynn was forced to leave.

A registered Democrat, Flynn indicated enthusiastic support for Trump’s presidential candidacy, making a number of appearances on news outlets and the campaign trail as the contest between Trump and Democrat Hillary Clinton intensified last summer.

Various mainstream outlets have reported that Yates is expected to say that on January 26, she approached Trump’s White House counsel, Donald McGahn, with “alarm” that Flynn’s statements made to Vice President Mike Pence about the substance of his telephone calls with Russian ambassador Sergey Kislyak were not truthful, apparently based on data captured by the U.S. intelligence community during its customary surveillance of Kislyak as an “agent of a foreign power” under the 1978 FISA law.

The discrepancy, which included Flynn’s name, was leaked to The New York Times and The Washington Post and ultimately resulted in Flynn’s resignation on February 13.

As The Post & Email pointed out in an article published Sunday evening, the media is not asking how Yates was made privy to the substance of Flynn’s conversations with Kislyak.

Other intelligence-related leaks early in Trump’s administration included portions of his telephone calls with Mexico’s President, Enrique Peña Nieto, and Australia’s prime minister, Malcolm Turnbull.  In response, Trump declared that his administration would seek out, identify and prosecute the leaker(s).

Neither The Times nor The Post has divulged its sources, as is customary for news outlets.

Prior to Flynn’s resignation, controversy had arisen surrounding an appearance he had made in Russia in December 2015 alongside that nation’s president, Vladimir Putin, who many in Congress and the media say interfered with last year’s elections.

On March 16, Rep. Elijah Cummings (D-MD) and five other members of the House Oversight and Government Reform Committee claimed that Flynn violated the “emoluments clause” of the U.S. Constitution by accepting payment from a foreign government as a former U.S. Army officer.

Flynn denied having been paid for his speech by the Russian government, but rather, said he was compensated through a “US speakers’ bureau.”

It appears that Flynn properly informed the DIA, as required, of his plans to travel overseas.  However, he may not have informed the U.S. Department of Defense or Department of the Army of the payment he received for speaking at the event when renewing his security clearance in January of 2016.

Flynn has given speeches on behalf of private businesses in Russia and reportedly lobbied for a Turkish businessman with ties to Russia.

In advance of Yates’s expected testimony, CNN published an article Monday claiming that Obama White House sources told them that Obama had attempted to deter Trump from hiring Flynn.  CNN quoted an unnamed “senior Obama administration source” as having said that “Flynn’s name kept popping up” in regard to Russia.

Both the House and Senate Intelligence Committees are investigating potential ties between the Trump campaign and the Russian government, a claim Trump has repeatedly denied.  The FBI is also investigating.

In response to criticism leveled at Trump about Flynn, Trump also tweeted on Monday: