HOW DID SHE DISCOVER WHAT FLYNN SAID? 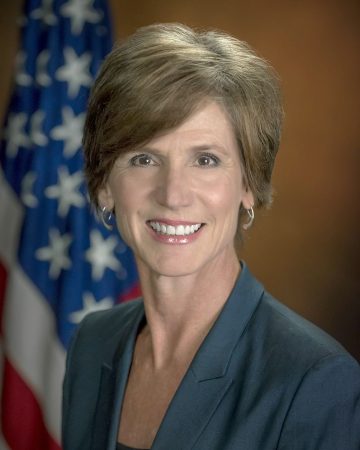 (May 7, 2017) — Former Deputy Attorney General and former Acting Attorney General Sally Q. Yates is scheduled to testify to the U.S. Senate Judiciary Committee’s Subcommittee on Crime and Terrorism at 2:30 p.m. EDT on Monday.

While the time of the hearing is stated on the Committee on the Judiciary’s website, at least five mainstream news reports published on Sunday are lacking it.

Yates was terminated as Acting Attorney General after she instructed her staff not to uphold a temporary travel ban issued by Trump on January 25.  She reportedly worked at the U.S. Justice Department for “decades” under both Republican and Democrat administrations.

According to the reports, Yates is expected to testify about a face-to-face meeting she had with Donald Trump’s White House counsel, Donald McGahn, in late January about her knowledge that Trump’s then-national security adviser, Lt. Gen. Michael Flynn (Ret), discussed sanctions placed on Russia by the Obama regime with Russian ambassador Sergey Kislyak when he had represented to Vice President Mike Pence that he had not.

Thus far, how Yates came into that knowledge has not been divulged, nor has the mainstream media expressed curiosity.

Flynn was an enthusiastic supporter of Trump through last year’s campaign, having indicated that he believed Obama’s approach to national security and Islamic terrorism was ineffective.  Flynn was Obama’s head of the Defense Intelligence Agency (DIA) until resigning in April 2014.

During the transition between the Obama and Trump administrations, the essence of Flynn’s conversations with Kislyak were leaked by unknown parties, presumably in the U.S. intelligence community, who would have had access to recordings made by the National Security Agency (NSA) of Kislyak as an “agent of foreign powers.”

Under the 1978 FISA law, foreigners can have their communications captured without a warrant.  If “U.S. persons” interacted with those targets and their communications gathered “incidentally,” their names are normally not revealed unless deemed necessary for national security purposes.

If the names are revealed, or “unmasked,” they are generally held closely by a very limited number of individuals in the intelligence community.  On January 12, Obama relaxed the close hold on such information.

While the Washington Free Beacon reported the day after Flynn’s February 13 resignation that its sources said there was a coordinated plan by Obama-regime operatives to discredit Flynn, The Washington Post reported on Friday that “Former national security adviser Michael Flynn was warned by senior members of President Trump’s transition team about the risks of his contacts with the Russian ambassador weeks before the December call that led to Flynn’s forced resignation, current and former U.S. officials said.”

The wider theme of Monday’s hearing is the extent, if any, of interference in the U.S. elections held in November by the Russian government.

The hearing will be live-streamed here.

Clapper has been accused of ordering warrantless surveillance of American citizens for political reasons and admitted that his testimony to a Senate committee in March 2013 was not truthful.  Clapper was not charged with a crime.

On March 4, Trump tweeted that his Trump Tower campaign office was “wiretapped” by the Obama regime last fall, for which the mainstream media excoriated him, claiming his assertion to be “unsubstantiated.”