“IF NOT CORRECTED, IT WILL KILL ME” 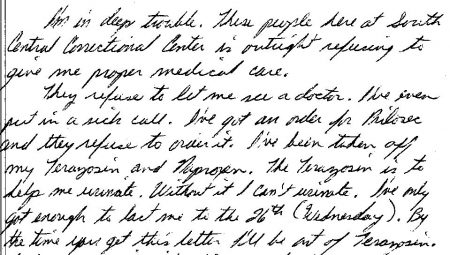 (May 1, 2017) — On Monday, The Post & Email received three letters from Tennessee state inmate Grenda Harmer, who wrote that once again he has been denied three essential prescription medications which have placed him at risk of death.

CCA has not responded to The Post & Email’s several requests for comment on conditions within another of its Tennessee facilities, TTCC, where Harmer was housed between July 2016 and early April.  Many other inmates have corroborated Harmer’s accounts of spotty medical care and non-dispensing of doctor-prescribed medications for a wide range of conditions, some of which are life-threatening.

TTCC has been called “the worst” prison in Tennessee.

In late March, Harmer told The Post & Email that his medications were denied him without warning with the explanation that he could purchase them from the prison commissary.  We contacted both spokeswoman Neysa Taylor and a spokesman for Correct Care Solutions (CCS), the prison’s private medical provider.

Late Monday afternoon, we contacted Taylor with the following message:

Hello, Ms. Taylor, I received today three very disturbing letters from the above inmate housed at SCCF.  He is out of three prescription medications, including one which is life-saving.

Could you kindly check on this situation.  I am going to publish the inmate’s letters this evening.

He states that he has been retaliated against, likely for communicating with me, which is his legal and constitutional right to do.

A second letter written on April 25 contained the following grievance in which Harmer wrote, “I’m being denied Terazosin, Prilosec and Naproxen.  Without Terasozin, I won’t be able to urinate and, if not corrected, it will kill me.“ Terazosin is described by Drugs.com as being “in a group of drugs called alpha-adrenergic blockers. Terazosin relaxes your veins and arteries so that blood can more easily pass through them. It also relaxes the muscles in the prostate and bladder neck, making it easier to urinate.”

When we heard from Harmer last week, he said he had gone four weeks without a prescription foam sleeping cushion and his eyeglasses.

SCCF Inmate Reports He is Again Denied Life-Saving Medication added on Monday, May 1, 2017