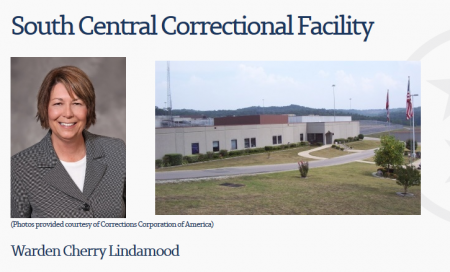 (Apr. 19, 2017) — In a letter dated April 12, 2017, an inmate at the South Central Correctional Facility (SCCF) in Clifton, TN acknowledged an April 8 incident which took place at the Turney Center Industrial Complex (TCIX) in which three correction officers were injured and hospitalized at the hands of inmates.

The Post & Email reported on that incident on Monday using as sources both mainstream media reports and information gleaned from inmate relatives and other observers.

The perpetrators were said to be members of a “security threat group,” or STG, as the Tennessee Department of Correction (TDOC) and other state correction entities term prison gangs.

As a result of the April 8 assaults, the SCCF inmate reported that that facility, also, was placed on “lockdown,” meaning that inmates are restricted to their cells virtually all of the time until the lockdown is lifted.

“The Turney Center incident is all over the news where 16 gang members stabbed three officers at TCIX. One officer was taken hostage but eventually released,” the inmate accurately wrote. He continued:

Last night, the same thing was attempted here but the staff was prepared for it. The officer told me that they were expecting it. Tear gas was used to stop the takeover before it could fully erupt. Gang members. 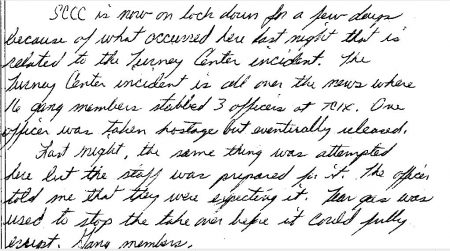 None of this would be happening if TDOC prison officials followed state law and its own policies. They are letting us out for pod recreation one tier at a time. This tier time thing is something else.

The “tier management” system instituted by former TDOC Commissioner Derrick Schofield has been highly criticized by many as ineffective and overly restrictive, particularly to inmates of minimum-security classification.

Schofield departed the TDOC last June to take an executive position with The GEO Group, an international correction corporation. He was succeeded by then-Deputy Commissioner Tony Parker. Both inmates and their relatives have reported that conditions within Tennessee prisons, particularly relative to gang activity, have not improved under Parker’s watch.

While SCCF is a privately-run prison, TCIX is operated by the State of Tennessee.  Gang activity leading to “riots” has additionally been reported to this publication by inmates at NWCX and TTCC.

The Morgan County Correctional Complex (MCCX) has been noted for its “hands-on” approach to inmates, some of whom have alleged serious injury at the hands of correction officers.  Last year, a report of a brutal beating of inmate John McCloud at the West Tennessee State Penitentiary (WTSP), allegedly by correction officers, was made by an inmate and McCloud’s mother.

While at WTSP, inmate Richard A. Mayers reported having been beaten on two occasions and suffering a shattered eardrum.  Mayers has also alleged having been punched in the right rib cage at MCCX.

In November, TDOC spokeswoman Neysa Taylor denied multiple reports of a riot having occurred at TTCC but acknowledged what was termed a “disturbance” at TCIX earlier this month.

In addition to gang activity, inmates, their relatives and former contract employees have reported substandard food and inadequate medical care at TTCC.  Over the last two years, a number of TDOC inmates from various prisons have contacted The Post & Email alleging that medical problems from which they have suffered for years have gone untreated and include hernias, missing limbs, neurological issues, and injuries from assaults allegedly carried out by both inmates and correction officers.