MAINSTREAM MEDIA MAY NOT HAVE ALL THE FACTS 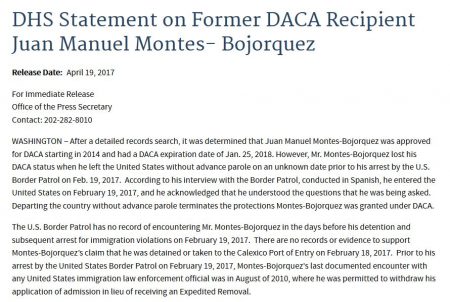 (Apr. 19, 2017) — In recent days, a number of mainstream media outlets have reported on the saga of Juan Manuel Montes, aka Juan Manuel Montes-Bojorquez, who was arrested and returned to Mexico in February after attempting to re-enter the U.S., according to the Department of Homeland Security (DHS) on Wednesday.

In most cases, the media has appeared to accept Montes’s version of events, which is that he was “deported” rather than that he left the U.S. without the required “advance parole” to remain “protected” by DACA, a program established by executive action in 2012.

According to most media reports, Montes was apprehended by unidentified U.S. Border Patrol personnel on February 17 and deported within “three hours” because he did not have his wallet with him and was therefore unable to prove that he was a DACA enrollee.

On Tuesday, USA Today reported that “Federal agents ignored President Trump’s pledge to protect from deportation undocumented immigrants brought to the United States as children by sending a young man back to his native Mexico, the first such documented case, a USA TODAY examination of the new administration’s immigration policies shows.”  The paper further reported that “After spending an evening with his girlfriend in Calexico, Calif., on Feb. 17, Juan Manuel Montes, 23, who has lived in the U.S. since age 9, grabbed a bite and was waiting for a ride when a U.S. Customs and Border Protection officer approached and started asking questions.”

On Tuesday, NBC News reported that Montes’s attorneys have asserted that he “has a cognitive disability from a brain injury.”

USA Today amplified on that claim with a report stating that Montes reportedly “suffered a traumatic brain injury as a child that left him with learning disabilities that meant a constant struggle to keep up in school and everyday conversations.” Having reportedly come to the U.S. at the age of 9, Montes was said to have “made it through special education courses and graduated high school in 2013. He started taking welding classes at a Southern California community college and paid for it by picking crops in California and Arizona.”

Although the reports say that Montes is now being assisted by a U.S. legal team in suing DHS, the lawsuit or FOIA request appears to be for “documentation” surrounding Montes’s alleged removal from the country rather than for the immediate right to return to the U.S.

USA Today reported that on Tuesday, a DHS spokeswoman said that “the department had no record of him renewing his DACA status after it expired in 2015.”  On Wednesday, however, DHS agreed with Montes’s attorneys’ claim that Montes had been a DACA enrollee since 2014 and had not allowed his status to lapse.

The two sides appear to agree that regardless of how he left, Montes re-entered the U.S. on February 19, was apprehended by the U.S. Border Patrol and sent back to Mexico the next day.

A statement attributed to Montes is quoted by USA Today as “Some people told me that they were going to deport me; others said nothing would happen. I thought that if I kept my nose clean nothing would happen,” which might refer to his general understanding of the difference in approach toward DACA recipients between the Obama and Trump administrations rather than the alleged events of February 17-20.

Montes reportedly has on his record “four convictions: one for shoplifting in January 2016, and three for driving without a license, most recently three months ago.”

After a detailed records search, it was determined that Juan Manuel Montes-Bojorquez was approved for DACA starting in 2014 and had a DACA expiration date of Jan. 25, 2018. However, Mr. Montes-Bojorquez lost his DACA status when he left the United States without advance parole on an unknown date prior to his arrest by the U.S. Border Patrol on Feb. 19, 2017.  According to his interview with the Border Patrol, conducted in Spanish, he entered the United States on February 19, 2017, and he acknowledged that he understood the questions that he was being asked.  Departing the country without advance parole terminates the protections Montes-Bojorquez was granted under DACA.

The U.S. Border Patrol has no record of encountering Mr. Montes-Bojorquez in the days before his detention and subsequent arrest for immigration violations on February 19, 2017.  There are no records or evidence to support Montes-Bojorquez’s claim that he was detained or taken to the Calexico Port of Entry on February 18, 2017.  Prior to his arrest by the United States Border Patrol on February 19, 2017, Montes-Bojorquez’s last documented encounter with any United States immigration law enforcement official was in August of 2010, where he was permitted to withdraw his application of admission in lieu of receiving an Expedited Removal.

USA Today additionally reported on Tuesday under the headline “Trump increases deportations of formerly protected DREAMers” with a photo of Montes that “The Trump administration has stepped up the deportation of undocumented immigrants who had come to the United States as children and lost their protected status, which had allowed them to stay, federal data provided to USA TODAY shows.”

The article then clarifies that DACA recipients who “committed serious crimes, became affiliated with gangs or otherwise became threats to public safety” were deported.  Under Obama, the rate of deportations in such situations was reportedly “seven a month since the first DACA applications were approved in September 2012,” while a reported 43 “former DACA enrollees” were removed from the U.S.

During the 2016 presidential election cycle, in a break from its custom of refraining from endorsing or condemning political candidates, USA Today took a strong position against Trump, calling him “unfit for the presidency.”

The outlet has stressed that “a growing number” of illegal aliens “face deportation” because of crimes in their past considered to be “non-violent,” including having entered the U.S. illegally in the first place.

In the wake of Montes’s story, Democrat members of Congress have been quick to condemn President Donald Trump for allegedly reneging on his promise to avoid deporting DACA enrollees.

Was a DACA Recipient Deported, or Did He Voluntarily Leave? added on Wednesday, April 19, 2017