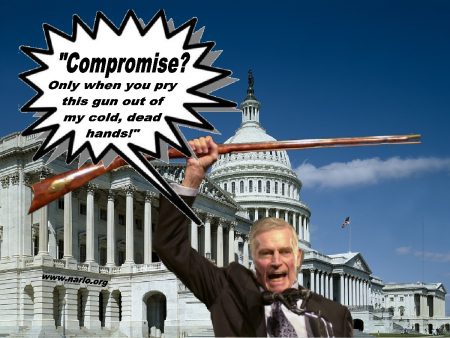 (Apr. 16, 2017) — “Tragedy in life normally comes with betrayal and compromise, and trading on your integrity.  That’s really where failure comes.” Tom Cochrane

“There is no compromise when it comes to corruption. You have to fight it.” A. K. Antony

“The ‘morality of compromise’ sounds contradictory. Compromise is usually a sign of weakness, or an admission of defeat. Strong men don’t compromise, it is said, and principles should never be compromised.” Andrew Carnegie

For the last 100 plus years, Republicans have been compromising with Democrats and what has it got them, or the American people?  When one side wins all the debates, compromise becomes meaningless.  In the eternal struggle of conservative vs. liberal, compromising by conservatives has come to mean capitulation!

During the Obama Administration, Republican Senators joined with Democrats to confirm two of the most liberal U.S. Supreme Court justices that Obama could find in Kagan and Sotomayor.  Republicans even voted for Bill Clinton’s nomination of Ruth Bader Ginsberg in a 96 to 3 vote.  Justice Ginsberg is so liberal she believes that the high court should consider other international law in deciding Supreme Court cases, in addition to the U.S. Constitution.  Why didn’t the Republicans filibuster Ginsberg’s nomination?

But now the Democrats have voted to filibuster President Trump’s nomination of Judge Neil Gorsuch, forcing Senate Majority Leader McConnell to employ the “nuclear” option that only requires a simple majority vote to allow Judge Gorsuch to be confirmed.  The Democrats will rue the day they forced the Republicans to invoke the nuclear option if any more Supreme Court justices die or retire during Trump’s presidency.

One conservative patriot recently wrote: “The Conservative establishment is nothing more than Dem-Lite!  No wonder the Republican Party has been such a bunch of pansies for the past several elections. They filled their ranks with scores of Benedict Arnolds who betray our God-given values and desecrate our conservative heritage!

So we ask the Republicans in the U.S. House and Senate, how has compromising and being nice to Democrats worked out for you?

Yes, we are civilized and we have been trained to be nice, polite and civil.  But how is that working out for the American people?  Has it stopped the onslaught of local, state and federal laws that continue to “eat” away at our freedom, our liberty and our property rights?  Have Washington, DC Democrats, or your liberal-controlled state houses, or your Democrat-controlled city or county councils changed course because those on the other side are being civil?  Has being nice changed one liberal-progressive-socialist mind?  All you have to do is look at the number of sanctuary cities to answer that question.

Conservatives have an opponent (Progressives) that is not only intransigent and inflexible, but they have been successful in winning the hearts and minds of a large percentage of the people, academia and the news media, for two reasons.  One, the Progressives have “bought off” the people with “giveaways” out of the public treasury (our money) and have created a “pig trough” from which the “people” can feed.  Pigs don’t bite the hand that feeds them.

Two, they have adroitly used irrational “compassion” and the people’s collective “guilty conscience” to sell the people, academia and the news media that the “compassionate-collectivism” way is the only right way.  To liberals, individual freedom and unalienable rights are passé, as is the U.S. Constitution.  But the truth is, mandatory compassion (taxes) is not compassion at all.  It is enforced charity by any other name.  Enforced charity is servitude, if not slavery.  And collectivism is the arch-enemy of individual freedom and liberty.

With strong support from the bought-off people, Progressives have been able to fundamentally change America to their ways over the last 100 years in spite of conservatives’ somewhat limp opposition to that change.  It is readily apparent that conservatives do not have academia and they certainly don’t have the news media in their pockets.  What they might have is enough people to oppose the liberal-progressive agenda if America is truly a center-right country, as so many have claimed.  However, if those “enough people” cannot come together on their values and principles and vigorously defend them, the liberal-progressive agenda will have won.

The depth of anyone’s commitment to change is directly related to their conviction that what they stand for is right.  The more intransigent your opponent, the more force you will have to bring to defeat that opponent.  As you increase your force, being nice becomes less and less effective, as history has taught us.  Neville Chamberlain did not stop the Nazis by being nice to Hitler, and Obama didn’t stop Iran, North Korea or Syrian dictator Assad by being nice, either.  Finally, a President with a strong commitment to American security and American lives acted decisively when dictator Assad gassed his own people ….. again!

Unless conservative Americans increase their force against the opposition and cease being nice, the other side will not get the message.  Unless conservative Americans realize that they are not going to win by donating pennies to those who are fighting for their freedom on their behalf, the force that freedom groups are able to apply to the problem can only be “limp” at best.  It takes the three “M’s” to win a war …. Men, Materials and Money, lots of money.  Right now, there is not enough of either to win anything.  Because not only does the opposition have a large segment of the people, academia and the news media in their pockets, but they also have billions of our tax dollars to push us back at the executive level, at the legislative level and at the judicial level, be it local, state or the federal government.  But worse, the government “System” built up around the bureaucracy and crony capitalism supports special-interest groups in a big way, again with our tax money, to fight against conservatives, no matter who is President.

In a war — and we are in a war of ideas, ideology and philosophy — when the other side holds most of the “aces,” and they do, the opposing side had better resort to the winning tactics of generals who are outnumbered, out-gunned and out-spent.  Compromising and being nice are not part of those tactics.

General Washington changed the field of battle by employing guerilla warfare.  The British moaned and groaned that he wasn’t fighting fair.  Tough!  As he was outnumbered, he turned to the messages of passion and patriotism to motivate his men.  When he was outspent, he enlisted the help of the enemy of his enemies, France.  Conservative Americans are not in a shooting war ….. yet, but if conservatives don’t start resorting to the strategy of winning and cease being nice, they will most certainly lose and so will freedom and liberty.  When will they get it?  Compromising on principles is not compromise ….. it is capitulation!  When Democrats are moving hard left, as they always do, compromise by Republicans is a fool’s errand and akin to political suicide.  Democrats have won because Republicans have compromised their principles for far too long.

As government tyranny and enforcement of unconstitutional law rises, as Republicans continue to capitulate to the Progressive ideology, as politicians and bureaucrats at every level of government continue to squeeze Americans with new and more draconian laws, violence will be the final arbiter unless WE THE PEOPLE rise up en masse and peaceably take control of our government and bring it back to the principles of constitutional law that the Founding Fathers created for us, at great cost.  What we have now is a government run amok by special interests, out-of-control bureaucracies and politicians only too eager to pander to special interests for the money and political influence they will need to win the next election.  On the other side we have an electorate that is oblivious to the corruption that goes on at every level of government and doesn’t seem to care.

Because of the American people’s gross ignorance of the fundamental principles of liberty and the unwillingness to fight for those principles, America has been and is proceeding down a path to insolvency and national suicide.

In the end, the people get what they deserve by the actions they take, even if what they get is bankruptcy, anarchy, chaos ….. or slavery.

When the principles of liberty have been betrayed, compromise just aids and abets the betrayal.

At NARLO (National Association of Rural Landowners) we don’t compromise on principle and we certainly don’t capitulate.   We fight.  We have many tools with which the rural landowner can fight a tyrannical government that continues to encroach upon and repeal constitutional property rights.  We offer NARLO’s very informative website, powerful, legally intimidating, constitutional No Trespassing signs, a unique and effective Rural Landowner Handbook and a “Getting Even With Government” package containing effective documents to fight government, at all levels, including the IRS, even if you aren’t a rural landowner.