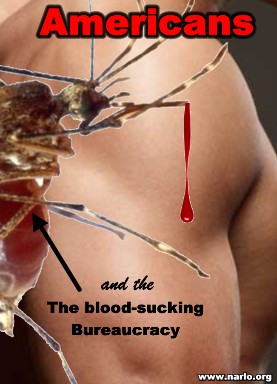 (Apr. 9, 2017) — “American bureaucracies are a blood-sucking enterprise that eats at the very heart of freedom, liberty and the property rights of all Americans, digs deep into the American economy and burns up countless billions of taxpayer dollars in unneeded and unwanted government services, that only serve to turn free Americans into subjects of an out-of-control, arrogant and abusive government, run by un-elected bureaucrats.”  Ron Ewart

Article 1, Section 1 of the U. S. Constitution reads:

“All legislative Powers herein granted shall be vested in a Congress of the United States, which shall consist of a Senate and House of Representatives.”

In America, legislative powers are described as the duty and responsibility of the legislature, consisting of a House (435 members) and a Senate (100 members), to pass proposed legislation, called “bills,” into law.  Notice that Article 1, Section 1 precedes the phrase “legislative powers” with the word “All.”

So if “all legislative powers” reside in the legislature, what “law,” passed by the legislature, gave the federal bureaucracies the power to also pass laws?  Is it because they call them “rules” instead of “laws?”

There are only 535 members of the United States legislature in the House and the Senate whose sole job is to pass laws.  Under the Constitution, no other government body has that power and yet there are hundreds of federal bureaucracies passing “rules” all the time.  Those “rules” have the same effect, as do the “laws” passed by the legislature.  In 2016 the Obama Administration bureaucracies passed 81,640 pages of new rules.  The entire King James Bible has only around 1200 pages.

As of 2009, the federal government employed around 2,900,000 people, in 456 federal agencies.  Many of those agencies have “rule-making” authority, in direct violation of Article 1, Section 1 of the U. S. Constitution.  All of the people in those federal agencies making rules are not elected by the people of the United States and therefore do not represent the people, in what is supposed to be a representative form of government, better described as a Constitutional Republic.

But it gets even messier than what we have described.  Those 2,900,000 federal employees in 456 federal agencies fall under the Federal Civil Service as “civil servants” (an oxymoron) established in 1871 (5 U.S.C. § 2101) as modified by the Civil Service Reform Act of 1978.  Those 2,900,000″ civil servants” are further being represented by a plethora of very powerful unions.

Nevertheless, it is not the size of the federal workforce or their salaries that is the problem.  It’s the political power they wield with government, a power that flies in the face of representative government.

Most employees in the federal workforce (estimated to be over 90%) are graduates of our liberal colleges, or they are a constituency or minority group that aligns with the Democrat Party.  Even though the Hatch Act prohibits federal employees from engaging in political activism, it has not stopped them.  Recent events are a testament to that reality when employees, some officers and maybe some very senior officers engaged in a plot to prevent hundreds of conservative groups from obtaining tax-exempt status under IRS codes 502(c)3 and 4 during the Obama Administration, prior to the 2012 election.  Recent illegal releases of classified information to derail President Trump, or embarrass him, by employees of the intelligence community is another example.

The embattled Department of Veterans Affairs (VA) said it will take no less than 275 days to take disciplinary action against a nurse charged with operating on a veteran while drunk due to the complex and time-consuming hoops administrators have to jump through.  Is there any question why the VA is such a corrupt and inept bureaucracy that allows veterans to die while waiting for care?

The sad fact is, it is easier and probably less costly to keep the employee on the federal payroll than to go through the lengthy administrative Civil Service process necessary to reprimand or terminate the employee.

The growing power of these and other unions in the federal government led President Theodore Roosevelt to issue Executive order 163 on January 31, 1902, banning federal workers from “individually or through associations, [soliciting] an increase of pay, or to influence or to attempt to influence in their own interest any legislation whatever, either before Congress or its Committees, or in any way save through the heads of the Departments in or under which they serve, on penalty of dismissal from the government service.”  This Executive Order was expanded by Roosevelt on January 26, 1906, to include the independent agencies as well.  On November 26, 1908, Roosevelt dramatically widened the extent of the Executive Order to include military personnel, expanded the kind of information which could not be communicated, and banned other actions by employees.

Under Congressional pressure, President William H. Taft made the Executive Order less onerous.  On April 8, 1912, Taft amended the order to permit federal workers to communicate with Congress, but required them to do so through their supervisors and department heads.

Congress passed the Lloyd-La Follette Act (§6, 37 Stat. 555, 5 U.S.C. § 7511) on August 24, 1912, declaring that “the right of persons employed in the civil service of the United States, either individually or collectively, to petition Congress or any member thereof or to furnish information to either House of Congress or to any committee thereof, shall not be denied or interfered with.”

The Lloyd-La Follette Act provided a significant impetus to the formation federal employees’ unions. In 1916, the American Federation of Labor (AFL) acted to bring the various local unions together to form a single national union. The National Federation of Federal Employees was founded in Washington, D.C., on September 17, 1917. In 1918, it became the first labor union to win the legal right to represent federal workers.  (source:  wikipedia)

These federal unions and the federal employees they represent are more powerful today than they have ever been in the past.  They are very wealthy and exert tremendous influence over the Congress to pass laws favoring federal employees or Progressive ideology and policies.

These 2,900,000 federal employees and the unions that represent them are part of an ever-widening global “System” that cares not one whit about constitutional principles or individual freedom.  But they care everything about manipulating and exploiting the political system to favor them.  In our article entitled, “The System – Impenetrable, Inflexible and Un-Yielding” we wrote:

“Much of the anger that is flaring up all over America today, is the frustration over the ‘System.’  We elect the people who say they are going to change the ‘System’, but nothing changes. It only gets worse.  It seems we can’t find a leader that has intellect, honor, passion and courage to challenge the ‘System’, as well as challenging international interests with the full force, faith and credit of the United States of America.  Some think Trump can do it, but beware of putting your faith in just one man. The real challenge is the ‘System’ itself and it will not be broken up without massive resistance from millions of Americans.”

“Even when glaring events occur that should arouse the public to outrage and demand change, like the debate over Planned Parenthood selling baby parts, something comes along to save the ‘System’ (like the Democrats) and stop any attempts to make the situation right.”

“Everyone knows that the IRS is totally corrupt, dysfunctional and in many cases, unlawful and yet it lives on.  Why hasn’t Congress fixed it?  Because millions of jobs in accounting and the legal arena would go away if the IRS were dismantled.  Those jobs have a powerful lobby in Washington DC (the ‘System’) and will never let Congress do away with those jobs.  We explained this situation in an article we wrote in January of 2014 entitled, “Why Congress Will Never Repeal the IRS.” (see: http://www.narlo.org/idarchives/011214.html)”

“As we previously said, the ‘System’ is supported primarily by special interests.  (Federal employees are a very powerful special interest)  The special interests can be money, socialism, environmentalism, welfare, land use, racism, immigration, health care, climate change, corporations, unions and even animal rights groups.  In America there are special interests for every occasion and they all have their lobbyists in Washington DC and in every state legislature, to pound on the table and demand that their cause be funded by your money.  Our alleged representatives give in almost every time.”

Under this “System” the American citizen has very little influence over the laws passed by the legislature and the bureaucracy at the federal, state, or even the local level.  Special interests have most of the power.  When a bureaucracy holds a public hearing, only the special interests show up in numbers.  The only real power the people have is their vote, but the “System” couldn’t care less about your vote and mostly ignores it.

Before the American people can fix America, they are going to have to dismantle the “System,” and as it stands right now, the task seems almost insurmountable.  The “System” has a greater power to perpetuate itself and grow stronger than the people have to take it apart, no matter how hard the Trump Administration or a Republican Congress may try.  Federal employees and the left-leaning unions that represent them are an integral part of that “System.”  That is “Why It Is So Hard to Fix America.”

How would you FIX America?

2 Responses to "Why America Is So Hard To Fix"