IN RESPONSE TO SARIN-GAS ATTACK 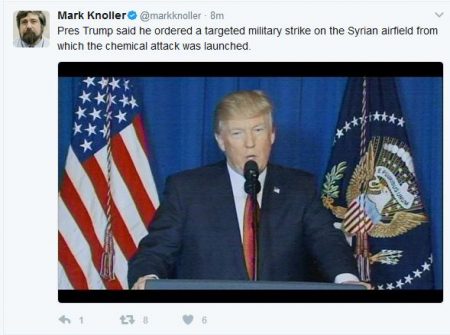 (Apr. 6, 2017) — In response to a reported chemical weapons attack launched on his own people Tuesday by Syrian President Bashar al-Assad, President Donald Trump authorized between 50 and 60 air strikes on a Syrian military base on Thursday night.

The order was given from Trump’s Mar-a-Lago resort, where he met with Chinese president Xi Jinping and his wife along with his wife, Melania, on Thursday evening.

The meeting with the Chinese leader will continue on Friday.

On Thursday morning, Trump indicated to reporters that the chemical attack, which killed men, women and young children, “crossed many, many lines” for him.

Following the attack Trump was critical of Barack Obama for having identified a chemical attack as a “red line” which, if crossed, would call for action from the U.S. which ultimately did not materialize.

In June 2013, al-Assad reportedly launched chemical weapons on his own people which killed more than 100.  At the time, Trump opposed U.S. intervention in Syria and urged Obama to obtain “congressional approval” before entering the civil war which began in March 2011.

In a recorded statement aired just after 10:00 p.m. EDT, Trump condemned the Sarin-gas attack which killed more than 80 on Tuesday.

Shortly after Trump’s remarks were aired, Mark Knoller of CBS News tweeted that “Pres Trump said he ordered a targeted military strike on the Syrian airfield from which the chemical attack was launched.”

Trump has asked other nations to form a coalition with the U.S. to put an end to the “slaughter” in Syria.