“EVERY MAJOR OUTLET HAD THIS SCOOP, NONE WOULD RUN IT” 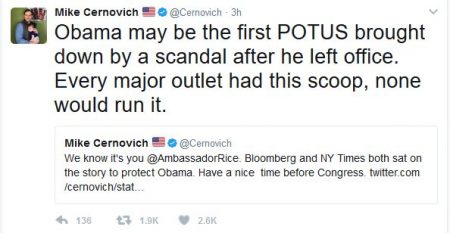 At some point before he wrote his post, Cernovich tweeted, “We know it’s you @AmbassadorRice,” using an apparent former Twitter handle from when Rice served as ambassador to the United Nations under Obama.  “Bloomberg and NY Times both sat on the story to protect Obama.  Have a nice time before Congress…”

As has been widely reported, releasing the name to the public of a U.S. citizen collected during the monitoring of foreigners is a felony.  The Senate and House Intelligence Committees are reportedly investigating alleged Russian meddling in the 2016 election and intelligence leaks which revealed a U.S. citizen’s name and the details of phone calls Trump had with the president of Mexico and prime minister of Australia during his first days in the White House.

The name of Lt. Gen. Michael Flynn, Trump’s first national security adviser, was leaked to The New York Times and The Washington Post prior to Trump’s inauguration in an early indication that certain U.S. intelligence agents could be working to sabotage the incoming administration.

On March 22, Nunes told reporters that he found intelligence he had reviewed at the White House “deeply troubling” as it related to the collection of data on Trump campaign aides, whether intentional or not.

On Friday, Fox News’s Adam Housley reported that the Obama regime was conducting some type of surveillance “for political purposes before Trump was the GOP nominee.”

In a subsequent tweet to that which announced the publication of his story on Medium.com, Cernovich wrote:

His reference to “Maggie” is most likely New York Times writer Maggie Haberman, formerly of Politico.

On March 26, Cernovich was interviewed by Scott Pelley of CBS News.