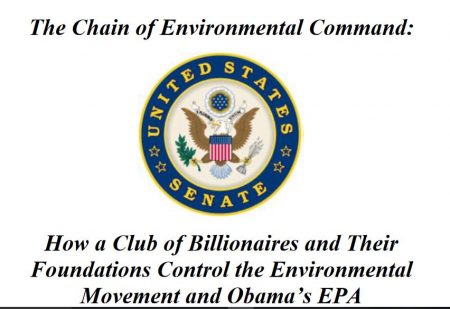 (Apr. 2, 2017) — More and more conservatives are proclaiming the virtues of clean energy. At least that’s what some groups want you to believe. In reality, far-left “charitable” foundations have given pretend conservatives millions of dollars to advance a climate chaos, renewable energy agenda – channeling the funds through intermediary groups to OxiClean the transactions and limit transparency and accountability.

The huge Green Profiteers Network has to be at least somewhat bipartisan to ensure continued mandates, renewable portfolio standards, production and investment tax credits, regulatory exemptions and other subsidies that have made Climate Crisis, Inc. a $1.5-trillion international business. With global financial and insurance giants allying with that crowd and determined to procure some $93 trillion (!) by 2030 to create a “de-carbonized” and “sustainable” world economy, the effort has intensified.

But now it must contend with President Donald Trump. His growing list of executive orders and regulatory reviews is rapidly reversing eight years of Obama “Clean Power Plan,” “social cost of carbon” and other regulatory decrees; laying the foundation for reversing EPA’s absurd finding that plant-fertilizing carbon dioxide “endangers” human health and welfare; and putting the United States in a position to lead the world back from the brink of Paris pact pandemonium and wealth redistribution.

Other countries will likely follow these energy and climate actions, says Cornwall Alliance ethicist Calvin Beisner, thereby “sparing their citizens from the crushing costs of pointless policies to mitigate global warming, by raising energy costs and prohibiting the most reliable, affordable forms of energy.” These actions are vital, because “the greatest threat to the environment is not affluence. It’s poverty.”

Radical environmental groups are nevertheless preparing to battle every Trump action in our courts, legislatures, newsrooms … and streets. Preparing to join all the prominent big-name groups is a host of like-minded, tax-exempt, pseudo-free-enterprise outfits, many operating under the umbrella of the Conservative Energy Network. This 2016 creation includes Young Conservatives for Energy Reform, an environmentalist Christian Coalition of America, Citizens for Responsible Energy Reform – and Conservatives for Clean Energy (CCE), launched in 2014 as an “educational” and “charity” organization.

They all advocate the asserted need to “fundamentally transform” energy and economic systems and switch from fossil fuels to “clean, renewable” energy, to save our civilization and planet from “dangerous manmade global warming, climate change and extreme weather.” The other thing they seem to have in common is funding sources that enable them to be so visible and active.

Prominent among those funding sources is The Energy Foundation. It launched CCE with a $350,000 grant in 2014, gave $535,000 to the Christian Coalition in 2013 and sent $925,000 to the North Carolina Solar Energy Alliance since 2008, the Civitas Institute notes, citing tax filings and other sources.

Between 2007 and 2014, Civitas points out, TEF also gave $4,476,000 to the Southern Environmental Law Center, a litigation factory that uses questionable climate and ecological claims to drive lawsuits against energy and other development projects, raising energy costs, killing jobs, and hammering the budgets, health and well-being of poor, minority and working-class families.

As a 2014 US Senate Environment and Public Works Committee report explained, a virtual who’s who of ultra-wealthy leftist foundations and their “Billionaires’ Club” of donors is the financial force behind The Energy Foundation. TEF serves as a “pass-through” hub that helps donors make it seem that grant recipients have a more diversified base of support than they actually do; shields them from transparency and accountability; and at times hides contributions from donors that could raise serious “red” flags.

One such donor is the secretive Sea Change Foundation. Set up by billionaires Nat Simons and his wife, Sea Change has been exposed by multiple investigators as a shell corporation that funnels huge sums to radical anti-fracking and anti-fossil fuel activists from Vladimir Putin pals, giant Russian oil companies and investment groups, and more reputable sources like the Gates and Walmart Foundations.

It’s a bit daunting to have this kind of money and power allied with green, urban and government elites against Blue-Collar America and the fossil fuels that still supply 81% of the USA’s energy.

This is the cabal of “consumer” and “environmental” groups that “Conservatives” for “Clean” Energy has in its corner. With offices in North Carolina and Virginia, CCE is heavily involved in fossil fuel and renewable energy political activism.

It is closely allied with the NC Solar Energy Alliance to extend government mandates, tax credits and other government assistance to a marginal electricity source that brings higher prices, lower reliability, and reduced ability of families, hospitals, schools and businesses to meet tight budgets, says Civitas.

It has also partnered with the SELC and other groups pursuing new strategies to bankrupt and close coal-fired electricity generation plants by generating misplaced fear about coal ash impoundments. Once public anxiety rose, activists demanded that the ash be dug up and moved “somewhere else,” regardless of the cost, which could be in the billions – and regardless of the fact that detected levels of chromium-6 (and other metals) do not pose health risks and come from natural rock formations, as well as from coal.

Keeping the ash where it is, and capping it with impermeable clay, is probably the best thing to do now.

But CCE then waded in with an opinion poll, which predictably found that North Carolinians want the ash moved but don’t want to pay for the removals, and support more wind and solar power. The groups are now poised to reprise the tactic in Virginia and other states with coal-fueled power generation.

TEF itself also weighed in, funding a study which predictably concluded that US renewable energy industries would “eventually” create 74,000 new jobs “from the ashes” of coal-related companies. Even if that were true, how many jobs would climate alarmism, chemical fear-mongering and costly renewable energy destroy in other sectors of our economy? Perhaps 740,000 or even 7,400,000?

To top it off, “clean” energy is not clean, renewable or sustainable. It requires perpetual subsidies, taken from taxpayers and consumers, and given to politically-connected crony corporatists. It needs vast land acreage – for wind turbines, solar panels, long transmission lines … and backup fossil fuel generating plants. And all those facilities require enormous amounts of concrete, steel, copper, rare earth metals, fiberglass, fossil fuels and other non-renewable raw materials dug out of the ground, often in faraway lands that have few environmental, health or child labor standards.

Just imagine the tremendous good all those billions of dollars from all those “progressive” billionaires could do if – instead of lining the coffers of radical anti-energy agitator groups – they were devoted to actually helping poor families in the United States, other industrialized nations, and especially the most impoverished, energy-deprived, disease-ridden, malnourished countries on Earth? That would be real, long overdue social and environmental justice. If wishes were horses ….