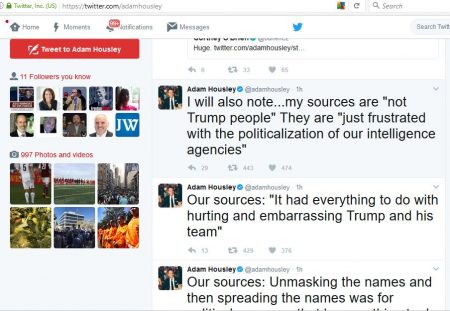 (Mar. 31, 2017) — At approximately 1:00 PM EDT, Fox News reporter Adam Housley tweeted that he has spoken to sources, presumably within the U.S. intelligence community, which say that government surveillance of U.S. citizens “for political purposes” began “before Trump was the GOP nominee.”

Both the U.S. House and Senate Intelligence Committees are reportedly investigating alleged Russian interference in the 2016 elections and alleged government surveillance of the Trump campaign as now-President Donald Trump tweeted in a series on March 4.

After Trump made the allegations, the mainstream media ridiculed them as “unsubstantiated” and complete fabrications.

However, on March 14 Fox News Senior Judicial Analyst Andrew Napolitano stated on air that three sources had told the network that ongoing surveillance data of the Trump campaign had likely been accessed by the British intelligence agency GCHQ at Barack Obama’s request.

According to Napolitano, U.S. intelligence agencies make their databases available to their UK counterparts on a continuous basis, 365 days a year. Napolitano hypothesized that Obama approached GCHQ for transcripts of conversations Trump and his aides had so as to avoid any American involvement in procuring the data.

While Napolitano’s colleagues, Bret Baier and Shepard Smith, quickly denied his claim and Napolitano disappeared from the network for nearly two weeks, he reappeared Tuesday speaking on the same subject and maintaining the integrity of his March 14 report.

On March 22, House Intelligence Committee Chairman Devin Nunes gave a brief press conference in which he indicated deep concern over documents he said he reviewed regarding apparent surveillance of Trump campaign aides which could have been “incidental” and “legal” but which he found “deeply troubling.”

Nunes has received backlash from ranking member Adam Schiff as well as the media for not disclosing his sources, which reportedly shared the information with him at the White House on March 21.

Atty. Larry Klayman, who represents former NSA and CIA contractor Dennis Montgomery, has said in a number of videos over the last several months that former Director of National Intelligence (DNI) James Clapper and former CIA Director John Brennan are responsible for orchestrating illegal, mass surveillance of federal judges, Klayman himself, members of the U.S. Supreme Court, and Trump when he was a private person.

Klayman has insisted that Nunes take the information he provided to Nunes in a March 21 urgent letter and interview Montgomery, who developed software for both government agencies some years ago.

On March 19, Dr. Jerome Corsi and former detective Michael Zullo told Infowars host Alex Jones that a trove of information Montgomery shared with Zullo and then-Maricopa County, AZ Sheriff Joseph Arpaio in 2013 and 2014 confirmed that mass surveillance without a warrant has been conducted routinely on U.S. citizens not suspected of a crime dating back to at least 2004.

Housley’s story appears to have broken on Wednesday evening, when he tweeted that “Congressional investigators know the name of at least one person who was unmasking names…and they know who.”

That tweet was followed by another which said, “To unmask a name is rare….never for politics.”

“Unmasking” refers to the divulging of the name of the U.S. citizens caught up in surveillance intended to be conducted only on foreign nationals for purposes of national security in accordance with the 1978 FISA law.  Both Democrats and Republicans agree that the revealing of an American citizen’s name as a result of such surveillance is a felony. 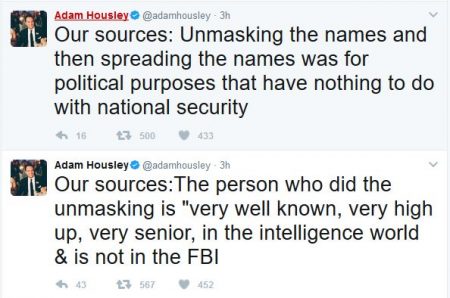 Housley’s five-tweet series on Friday concluded with “I will also note…my sources are ‘not Trump people’ They are “just frustrated with the politicalization of our intelligence agencies.”

The unmasking of Lt. Gen. Michael Flynn (Ret), Trump’s first national security advisor, was the first major indication that someone in the intelligence community had collected the communications of Trump aides during the transition period. However, in a January 19 and 20 article, The New York Times reported that “intercepted Russian communications” and “wiretapped communications” were collected by the FBI, working with other intelligence agencies, to determine whether or not Trump or any of his campaign staff had inappropriate dealings with the Russian government.

While on March 20, FBI Director James Comey confirmed publicly that the agency he heads is investigating any possible Trump-Russia ties, he would not confirm that it was investigating the intelligence leaks.

In a little-noted interview on MSNBC on March 2, former Obama Department of Defense official Evelyn Farkas appeared to confirm that surveillance of Trump and his campaign team was conducted and dispersed among various Obama-regime officials. She attributed the “leaking” to people being “scared.”

Farkas left the Obama regime in 2015 to work on Hillary Clinton’s campaign.

Despite ridicule, Trump has promised that his claim will be proved accurate.