WHY THE PUSHBACK FROM THE MAINSTREAM MEDIA?

Napolitano’s noticeable absence from the air since that time, including last week during Senate hearings for Trump’s Supreme Court nominee, Judge Neil Gorsuch, is believed to have been imposed as a result of his implication of British intelligence in allegedly providing data on the Trump campaign to the Obama regime.

In a March 14 appearance on the morning show Fox & Friends, Napolitano declared that “three intelligence sources” had informed “Fox News” that the Obama regime likely obtained information on the Trump campaign through the British intelligence service, GCHQ.

In a March 2 interview on MSNBC, former Obama official Evelyn Farkas appeared to confirm that surveillance was being conducted of Trump and his campaign aides and distributed widely, then leaked, in some cases, to the media.

Farkas justified the leaks from what she said was fear on the part of Obama regime employees.

Both on March 14 and in an article published at Fox News two days later, Napolitano did not invoke the term “wiretapping,” which Trump had claimed had been done in a series of tweets on March 4.  Instead, Napolitano said that “GCHQ…most likely provided Obama with transcripts of Trump’s calls.”

After Trump claimed he had been “wiretapped,” his press secretary, Sean Spicer, explained that Trump had meant to indicate that “broad surveillance” was done on his campaign.

Napolitano reported that U.S. intelligence agencies make available to their British counterparts all of the data they collect.  “The NSA has given GCHQ full 24/7 access to its computers, so GCHQ — a foreign intelligence agency that, like the NSA, operates outside our constitutional norms — has the digital versions of all electronic communications made in America in 2016, including Trump’s,” Napolitano wrote.

On March 17, Trump had appeared to compliment Napolitano as a “very talented legal mind” who supported his contention that he was surveilled by Obama.

The judge’s Fox News colleagues of Shepard Smith and Bret Baier responded to Napolitano by saying that the network could not support his claim, after which Napolitano disappeared and his Twitter feed went quiet.

The Daily Caller article is titled, “Fox News Brings Back Judge Napolitano, Who Still Stands By Obama Wiretapping Claim” with the indication that a video is embedded within the text.

This writer was unable to view the video because of a recurring error message which persists as of press time.

Following his return to Fox this morning, The Washington Post and CNN said that Napolitano’s claim is “baseless” and “false,” respectively.

Last week, commentator Ann Coulter called Napolitano’s statement “a wild accusation” and “untrue,” although she did not say how she reached that conclusion.

Recent allegations made by media commentator Judge Andrew Napolitano about GCHQ being asked to conduct ‘wire tapping’ against the then President Elect are nonsense. They are utterly ridiculous and should be ignored.

But Napolitano did not claim that GCHQ “conducted wiretapping.”  He suggested that the Obama regime approached GCHQ for data the British agency could have accessed from the body of U.S. intelligence already collected without any U.S. involvement in retrieving it.

On Wednesday the video of Napolitano’s interview with Fox News’s Bill Hemmer appears in Napolitano’s Twitter feed in which the retired judge states that he stands by his three sources.

The tweet appears to have been issued by Attorney General Jeff Sessions. 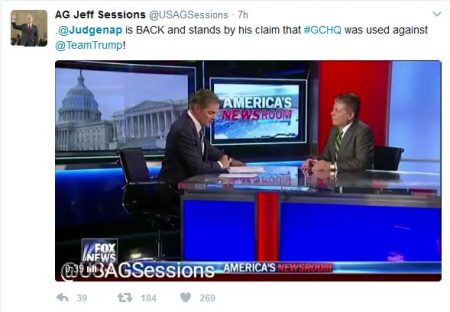 In an interview on March 15 with Tucker Carlson, Trump suggested that new information supporting his claim of government surveillance would be released within two weeks.

Rupert Murdoch, whose parent company owns Fox News, is attempting for the second time to purchase the remaining 61% of British-based “Sky,” which must be approved by the UK government.  Some have speculated that Napolitano was taken off the air because of the pending business arrangement.

The return of Napolitano occurred one week after House Intelligence Committee Chairman Devin Nunes announced that new documentation he had viewed indicated that some type of surveillance of Trump campaign aides had been carried out which, although “perhaps legal,” he saw as problematic.

On March 21, Nunes is said to have met with a source in or near the White House to view the documentation.  Nunes said on Tuesday that he will not divulge his source or sources to the other members of the House Intelligence Committee.

Last Friday, Fox News’s James Rosen reported that a “smoking gun” would soon be released from the NSA which would corroborate Trump’s surveillance claims.  No announcement has yet been made to this writer’s knowledge.

In 2013, Edward Snowden released documentation to The (UK) Guardian showing that virtually all communications exchanged among Americans are collected and stored by the NSA.

Judge Napolitano Stands By His Sources added on Wednesday, March 29, 2017

2 Responses to "Judge Napolitano Stands By His Sources"