WHEN QUOTATION MARKS MAKE ALL THE DIFFERENCE 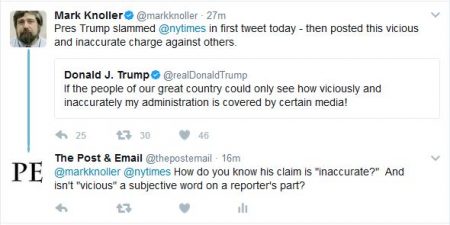 (Mar. 29, 2017) — On Wednesday morning, President Donald Trump tweeted his dismay at the media for what he perceives as “inaccurate” reporting about his young administration.

During the presidential campaign, Trump often berated the media for being “dishonest.”

Trump first called out The New York Times, as he has in the past, as a “failing” enterprise which “apologized to its subscribers, right after the election, because their coverage was so wrong.”

On November 15, 2016, the publisher and executive editor of the “Gray Lady” released a letter to its readership in which they stated that “we aim to rededicate ourselves to the fundamental mission of Times journalism. That is to report America and the world honestly, without fear or favor, striving always to understand and reflect all political perspectives and life experiences in the stories that we bring to you. It is also to hold power to account, impartially and unflinchingly. You can rely on The New York Times to bring the same fairness, the same level of scrutiny, the same independence to our coverage of the new president and his team.”

The two additionally thanked their readers for their “loyalty.”

The Times, like many other mainstream outlets, including CBS, had reported that Hillary Clinton was polling far ahead of Trump nationally in the weeks leading up to the November 8 election.

“Now worse!” Trump nevertheless added in his tweet about The New York Times.

The Post & Email then tweeted to Knoller, “How do you know his tweet is ‘inaccurate?’ And isn’t ‘vicious’ a subjective word on a reporter’s part?”

Without appearing to respond to us directly, Knoller tweeted several minutes later:

However, without placing the words “vicious” and “inaccurate” in quotes, Knoller’s tweet could be interpreted as his own opinion of Trump’s claims.

Journalists must remain neutral by refraining from expressing any opinion about a politician or his or her positions.  If they are using another’s words, those words must be placed in quotation marks.

Many Americans have come to believe that over the last three presidential-election cycles and perhaps for much longer, the mainstream media has devolved into a presenter of political commentary rather than factual information from all sides of an issue.

One such American is former CBS reporter Sharyl Attkisson, who contends that “the mainstream media will never again report facts without bias.”

In an undated Twitter interview conducted after the 2016 presidential election based on content, Attkisson responded to the following questions:

Q: why do so many reporters take a political stance? I know they’re human, but professionalism is still possible. Right?

A: It should be taught [in journalism] school. Suspend your own political goals and feelings when reporting. Not easy but possible

Q: do you think media will ever get back to reporting facts w/o partisanship?

Q: Do you see this upheaval of news as a healthy growing pain, or a symptom of our society separating on key issues?

A: I don’t think what we in the news are doing is good. But if the conflict ends up shaking up the media establishment maybe it’s time.

Attkisson left CBS in March 2014 after a 20-year career there, with observers noting that her groundbreaking reports on the Fast & Furious gunrunning scandal and the September 11, 2012 terrorist attack in Benghazi, Libya were sidelined by the network.

In 2004, then-CBS Evening News host Dan Rather presented a story using unverified documents which allegedly showed that then-President George W. Bush, who was seeking reelection, had shirked his duties while serving in the Texas Air National Guard (TANG).

Rather eventually resigned his senior position after insisting that although the documents could not be authenticated, “we reported a true story.”  Four other CBS employees were fired over the production of the story which an investigation found “failed to follow basic journalistic principles in the preparation and reporting of the piece.”