REQUESTS ADDITIONAL INFORMATION ON “ALLEGATIONS OF RACIAL DISCRIMINATION AND RETALIATION” 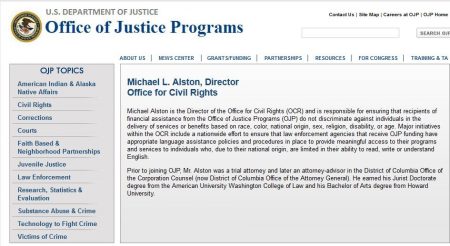 The letter related to a Title VI civil rights complaint filed in 2015 by Tennessee state inmate Jerome L. Johnson, TDOC #150724, after he received a “Class A” write-up, or disciplinary action, resulting from his refusal to enroll in the Pro-Social Life Skills (PSLS) class  at the Northwest Correctional Complex (NWCX).

Johnson’s refusal to participate in the class stemmed from his belief that it compelled him to admit to criminal wrongdoing involving drugs and/or alcohol. His report mirrored that of then-fellow NWCX inmate Walter Francis Fitzpatrick, III, who initially received a write-up for the same reason which was ultimately not pursued.

Johnson claimed that he was treated differently because he is black and Fitzpatrick is white.

After Johnson filed his complaint, Fitzpatrick again received a write-up which was adjudicated without his being present.  However, he received no punishment as a result.

In December 2015, Johnson was moved, reportedly without justification, to a more dangerous part of the prison, after which Johnson claimed to be the target of “harassment,” “retaliation,” and “intimidation” on the part of NWCX staff.

Johnson believes that the actions taken against him are part of a pattern of “institutional corruption” within the Tennessee Department of Correction (TDOC).

Enclosed with the three-page letter from Alston was a one-page Consent/Identity Release Form and two-page explanation of the department’s “investigatory uses of personal information.”

The Post & Email had contacted Alston by letter on behalf of Johnson and other NWCX inmates regarding general prison conditions as well as Johnson’s civil rights complaint as described to us in numerous letters accompanied by copious documentation.  We had also attempted to reach him or his spokesman once by telephone, although unsuccessfully.

Alston cited five federal laws, the alleged violation of which the Office for Civil Rights (OCR) is responsible to investigate once a complaint is received.

At the top of page 2 of his letter, Alston wrote, “The OCR does not have jurisdiction, or authority, to investigate your allegations regarding general conditions of confinement at the NWCX and MCCX because they do not implicate potential violations of these federal civil rights laws. As such, the OCR is administratively dismissing your complaint regarding these allegations and will not do anything further about them. Please be advised that our closure of your complaint regarding these allegations does not prevent you from raising these concerns with other agencies or courts.”

However, Alston requested “more specific information in order to investigate your remaining allegations of racial discrimination and retaliation.” Alston additionally referred to the Office of Civil Rights’ need to “disclose Mr. Johnson’s identity to the TDOC,” referring to the Tennessee Department of Correction as well as “Ms. Rondeau’s identity” in a reference to this writer’s communications sent to Alston regarding the letters and documentation we received from Johnson over a period of months.

Last year, Johnson provided documentation to The Post & Email demonstrating that he filed a Title VI complaint with the Tennessee Human Rights Commission. To our knowledge, Johnson has not received a resolution.

The Post & Email has received several other anecdotal accounts of racial slurs having been used in Tennessee prisons against blacks. 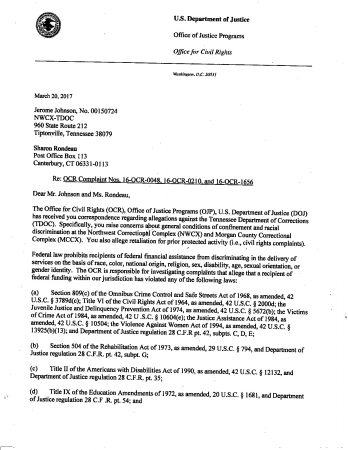 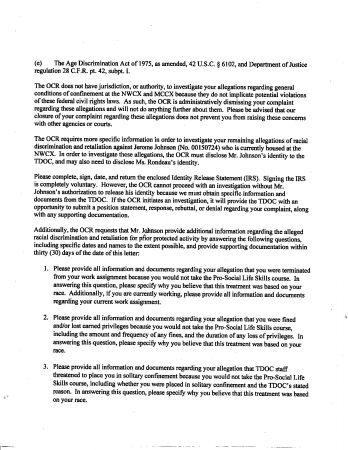 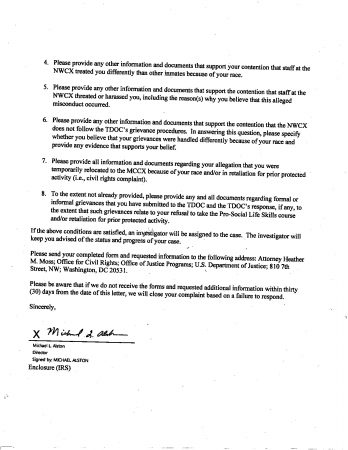