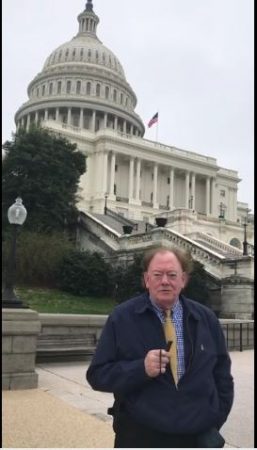 (Mar. 26, 2017) — Early on Sunday evening, Clant Seay, founder of Citizens Campaign Against Big Lick Animal Cruelty (CCABLAC), released a short video in which he affirmed an event scheduled for Wednesday in Washington, DC and an appearance with a congressman.

The group had previously scheduled the presentation of its petition containing 100,000 signatures to the White House and a subsequent press conference at the National Press Club on Wednesday, March 29.

Standing at the location of Donald Trump’s inauguration, Seay said that in addition to presenting the petition and holding the presser, the group will be meeting with Rep. Ted Yoho of Florida’s third congressional district, who is a large-animal veterinarian and former businessman.

The regulation, which would have enforced stricter inspection policies at horse shows to detect soring, was poised to be published in the Federal Register in the waning days of the Obama administration but inexplicably went quiet.

CCABLAC has produced a number of videos containing footage from shows in Mississippi, Tennessee and North Carolina in which competing horses can be seen wearing “stack” shoes on their front hooves and placing their weight on their hind legs as they walk around the ring.

The horse-advocacy group and others term the horses’ noticeably exaggerated walk, which is reportedly caused by pain inflicted on their front hooves and legs, the “Big Lick.”

Seay has featured in some of his videos a veterinarian and a former Walking Horse trainer, both of whom affirmed that “soring,” the package of techniques used to inflict pain on the horse to make it lift its front hooves abnormally high, has been passed down for generations and continues despite the passage of the Horse Protection Act, which banned the transport, sale or showing of a “sored” horse.

Soring can include the rubbing of mustard oil, kerosene or another caustic product on the horse’s pasterns; the affixing of inches-high “stack” shoes containing “pads” and the application of “chains” to further irritate the horse’s legs; and the insertion of objects within the horse’s hooves for training but removed prior to competition. Some horses endure further physical abuse on the part of their trainers.

After Trump’s inauguration, he issued an executive order halting the publication of all new regulations until they could be reviewed by his administration.

On March 11, The Post & Email reported on the upcoming event and a video posted in conjunction with CCABLAC which at the time had received three million views in three days.

The video, produced by thedodo.com, has now garnered over 11 million views.

In his announcement on Sunday, Seay said that Yoho plans to “reintroduce the PAST Act,” a proposal first raised in 2013 with bipartisan support which encountered a number of obstacles and did not become law.  “PAST” stands for “Prevent All Soring Tactics” and is intended to eliminate soring by assigning inspections only to those without a conflict of interest.

Seay, who blogs as “BillyGoBoy,” believes that the state of Tennessee retains a blight on its reputation for allegedly allowing sored horses to compete in shows in violation of the Horse Protection Act.

2 Responses to "Horse-Protection Advocates to Meet with Congressman Wednesday"